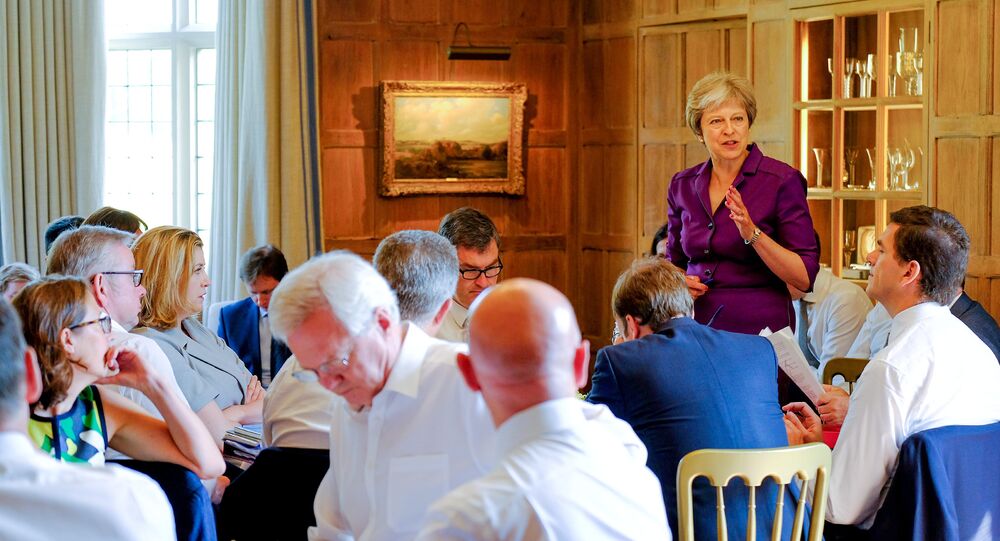 UK ministers have endorsed May’s plan to create a free trade area for industrial and agricultural goods with the EU, based on a "common rule book," agreeing also to "a new business-friendly customs model." Sputnik has reached out to several economists, asking them to share their views on the trade plan.

Yuri Kofner, economist and journalist from German printed journal "Compact",  said he feels skeptical about Brexit, “as a German and as a proponent of Eurasian economic integration,” adding that a united European Union  is in the interests of Europeans and Russians, as well.

However, he went on to say that the British people have made their democratic choice “obviously for a very good reason,” and there is nothing we “can do about it.”

A Brexit deal is “the best possible option,” according to Kofner, as it fulfils the two goals that the UK is striving to attain – resolution of the immigration issue on the one hand, and on the other hand, using the common EU market to the country’s advantage.

"That being that, many British citizens want to solve the problem of mass immigration which is not being solved, or at least for a long time has not been solved within the European community. Brexit meaning leaving the shared European border control obligations, yet retaining the common European market, is the best possible option under the given circumstances."

He brought up the idea that the EU as a bloc is the UK’s largest trading partner, citing a report by the House of Commons, which stated that the EU accounts for 43% of UK exports of goods and services and 54% of the UK’s imports.

Yuri Kofner’s views were echoed to a great extent by those of Dr. Gennadi Kazakevitch, deputy head of the Department of Economics at the Faculty of Business and Economics of Monash Univeristy, Australia, although the latter remarked that economically, the deal is more promising for the EU:

According to the academic, the now endorsed agreement is “a beautiful compromise keeping intact the majority of the EU advantages in the economic sphere, but restoring Britain’s control on immigration.” Nevertheless, he ascertained that May would still have to face down the challenge of negotiating both with EU partners and internally, with both hardline Brexiteers and Brexit opponents deeply engaged in the debate.

Detailing the UK-EU free trade agreement, Yuri Kofner says it may turn out to be beneficial for the UK, since it would mean open access to the “vital region” [EU], whereas high EU product standards will allow UK goods to be competitive in the global market, assuming at the same time that London would be able to shape its own regulations in other sectors more freely, namely “services or capital investments.”

"And most importantly, getting rid of dubious EU migration obligations, such as the Dublin Regulation, could mean safer borders and less domestic crime, which has become rampant," he said.

Kofner adduced 2017 statistical data from the British police, saying robbery, sexual assault, knife attacks and other violent crimes have gone up by 20- 29% year on year.

"Then, such an arrangement would give the UK the possibility to bilaterally cut free trade deals with other countries, such as the United States or China," he went on.

Kofner remarked that in the event of two or more free trade agreements (FTAs) overlapping, “EU interests would still have to be taken into account (no one in Brussels would accept Chinese goods labeled as “Made in the UK” flooding the European market).”  However, he doesn’t think this would be a major problem, as compared to “tedious” European domestic talks:

"This, however, would still be by far less a constraint than the drawn-out tedious negotiations the EU goes through internally when deciding on this or that trade agreement with third parties."

Kofner sees prospects for the contentious EU-EU free trade plan as most extensive for the UK:

"If Brexit leads to the UK-EU free trade area scenario, I could expect the signing of a bilateral UK-US "mini-TTIP" and more British involvement in China’s Belt & Road Initiative."

The latter may have to do with “a renewed global activism of a more independent United Kingdom” on territories of its former colonies. “Concerning, however, how Brexit might affect immigration, the results remain to be seen,” the economist concluded.

He went on to bring up what could be a “more important” issue for the British nation than immigration – the British attitude “towards its own culture, history and traditions which are under threat by cultural Marxism. “ He recollected a recent report by the Daily Mail whereby girls were banned from wearing skirts at dozens of schools across the country, which chose gender-neutral uniforms not to offend transgendered people.

“This shows that you don’t necessarily need migrants to destroy your own culture,” Kofner concluded.

On Friday, following lengthy semi-confident consultations, the British Cabinet backed the May-proposed plan for the future of the UK’s Brexit negotiations with the EU.

The proposal essentially oversees a UK-EU free trade area that establishes a common rule book for industrial goods and agricultural produce. May’s statement also said that no new changes in the future “would take place without the approval” of the British Parliament.

Ahead of Friday’s summit, there were reports of May planning to reshuffle her cabinet should anyone refuse to acquiesce to the plan; according to The Times, she even vowed to sack Foreign Secretary Boris Johnson if he opted to jeopardize the Brexit deal.

The views and opinions expressed by Yuri Kofner and Gennadi Kazakevitch are those of the speakers and do not necessarily reflect Sputnik’s position.