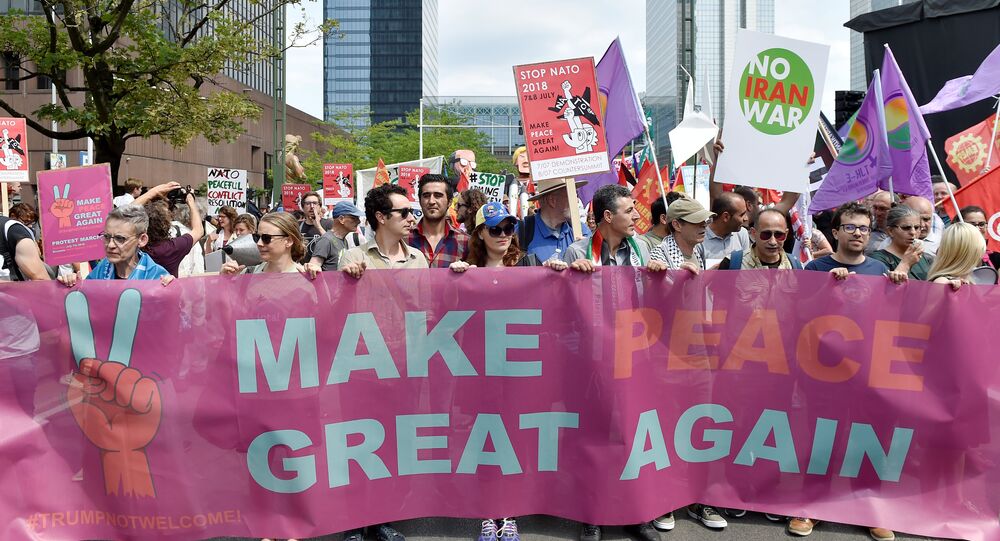 On Wednesday, Brussels will be hosting the NATO’s annual leaders’ meeting for the second year in a row. The alliance is being criticized by peace activists who have gathered in the EU capital to talk about military spending, nuclear disarmament and wars waged by NATO.

Sputnik’s Denis Bolotsky sat down with one of the counter-summit’s organizers – Belgian activist and spokesperson for the Vrede peace movement, Ludo de Brabander.

Sputnik: Yesterday you were addressing the crowd at the rally here in Brussels, and today peace activists gathered again for a counter-summit. What are you planning to discuss?

Ludo de Brabander: The counter-summit is really a day of reflection for the peace movement. We are trying to have as many peace activists as possible to discuss and analyze what NATO is doing, to exchange information. But it’s not only about information and about discussions on NATO, but also about strategies: How we can strengthen the peace movement? Because we think it’s really necessary to adopt strategies to inform people about what NATO’s real face is. For example, the military budget that will increase in the coming years – it is not in the interest of people. I think most people don’t want it. Recently we also did a poll on nuclear arms and most people, the majority, are against nuclear arms. It’s our task to put it into public debate, and this is one of the discussions we should have.

Sputnik: Last week the EU decided to prolong anti-Russian sanctions. What’s your view on that?

© Sputnik / Mikhael Klimentyev
NATO Alarmed Over Future Trump-Putin Agreements 'Uncoordinated' With Bloc – Reports
Ludo de Brabander: It was a large platform for several movements. It was not only a peace movement, it was also an environmental movement, [as well as an] anti-racism, migration, human right movement. And it was directed against Trump partly because for us he’s a symbol of the system we’re fighting against. His policy, in the way he’s doing it, is more aggressive. He’s really representing a superpower which doesn’t want to take into account the positions of other countries – and stands a little bit like a symbol of it.

But there are also other leaders like Erdogan, who is coming [and] is also very authoritarian; you have Hungarian leader Orban, but they are all the same, that’s why we say “Trump and his colleagues.” But we try to connect the peace issues with other issues. As I said, if you increase military budgets in times of social austerity, then you have no money left for social security. So, it’s also in the interests of trade unions, for example, to support the positions of the peace movement.

Sputnik: Last week the EU decided to prolong anti-Russian sanctions. What’s your view on that?

Ludo de Brabander: What is done is a little bit hypocritical. I compare it always with Israel. If you look, for example, at [its] occupation policy, the annexation of Jerusalem – whatever, it’s against international law. But when Russia came into Crimea and it was a majority of the population who wanted not to remain in Ukraine, then suddenly the sanctions are possible. And I think sanctions in general close the door. And sometimes I think sanctions are necessary, because we ask, for example, sanctions against Israel, because Israel is neglecting a whole bunch of resolutions of the United Nations, which is not the case with Russia.

What happened in Ukraine is a whole other dimension. I think this policy that the European Union and NATO are conducting, is not only counterproductive, it’s a self-fulfilling prophecy: creating an enemy, because you need the enemy to militarize. So you put soldiers at the border, you say always “Russia is a threat,” and then Russia reacts, and when they opened the door for Ukraine to access NATO, and the same for Georgia, it was clear that Russia would show: “This is the red line, we don’t want you there and we will react to that.”

The views and opinions expressed by Ludo de Brabander are those of the speaker and do not necessarily reflect Sputnik's position.