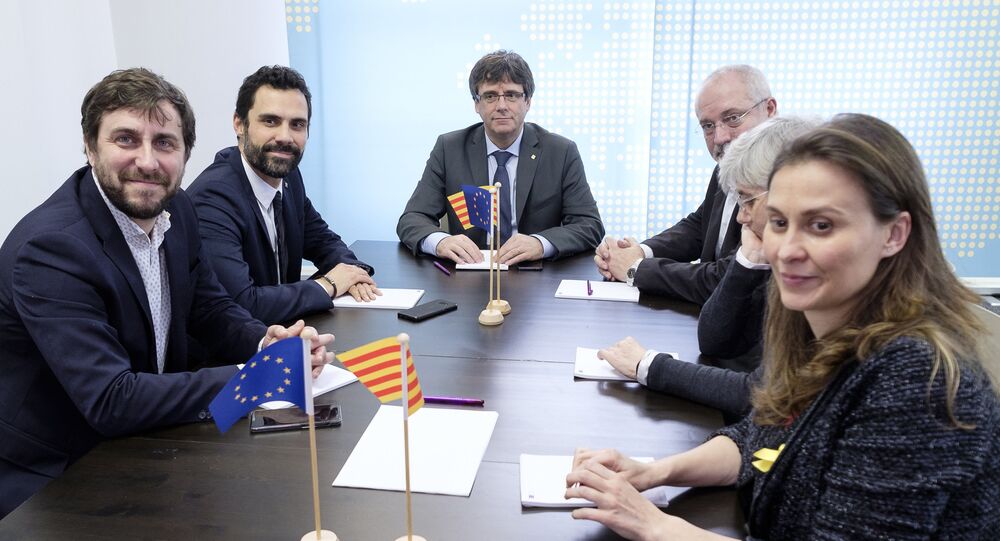 All Spanish Politicians in Exile 'Are Challenging Government' - Lecturer

With St Andrew’s University Professor Carla Ponsati being sought by the Spanish government over rebellion charges relating to the Catalonia independence movement, the controversy surrounding the issue may well flare up again.

Will she be extradited to Spain? Sputnik spoke with Guillem Colom-Montero, Lecturer in Hispanic studies at the University Of Exeter for more insight on the issue.

Sputnik: Are Ponsati and Puigdemont likely to be extradited to Spain?

Guillem Colom-Montero: All of the politicians who went into exile are actually really challenging the Spanish government, to a degree that very few people would have expected 5 months ago.

There is not even an arrest warrant for those who are in Switzerland. If you read the Catalan pro-independence newspapers, they believe that Spain is not acting as a truly democratic European country and therefore they will not be extradited to Spain.

© AP Photo / Paul White
Spain's Court Rejects Puigdemont’s Appeal Over Catalan Leader Election Law
Then if you read the more pro-Spanish state press, they consider the state’s actions legal and remain hopeful that they will eventually be extradited. Whether it’s fair or unfair is hard to say.

At the end of the day it is a complicated political conflict.

Catalonia has always been willing to ask for a referendum on self-determination, so it’s interesting to see that there will now be talks with Pedro Sanchez, so we will see some developments in the coming months.

Sputnik: How do you see the future of the movement progressing? Is Pedro Sanchez open to negotiations?

Guillem Colom-Montero: Neither the PSE or PSOE are willing to change the Spanish constitution to allow a referendum on self-determination, but we have seen a real change in attitude. Had Sanchez been Prime Minister a year ago, we would not be in this situation.

The upcoming negotiations are more relevant at the moment and they have time to reach an agreement that satisfies both parties.

The views expressed in this article are solely those of Guillem Colom-Montero and do not necessarily reflect the official position of Sputnik.