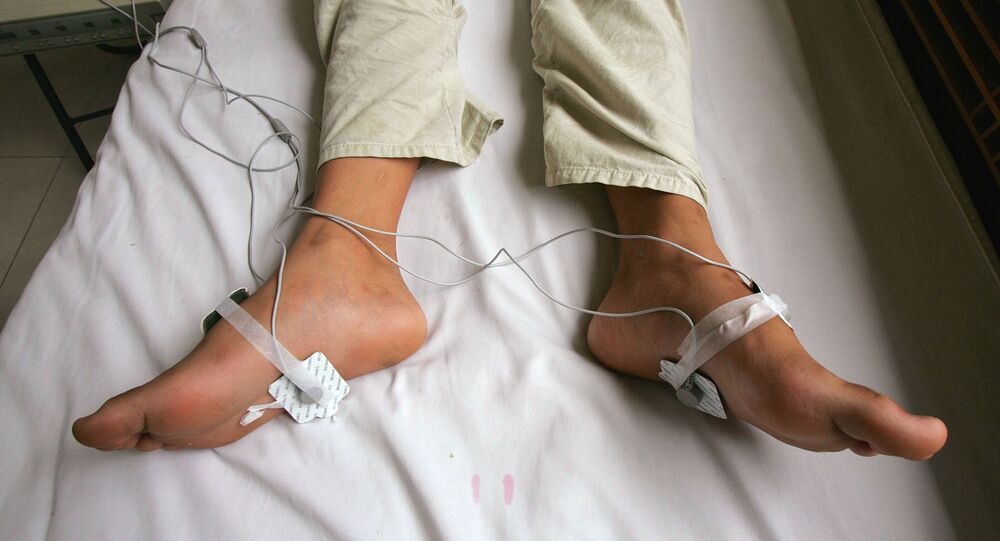 Shock Therapy on Children: 'It's Like a Cattle Prod' - Analyst

A US educational center for special needs children has retained the right to use electric shock therapy in its operations despite objections from local authorities, according to ABC. The news agency reported that state authorities had been trying to end this practice since 2013, but the Bristol County Probate and Family Court decided otherwise.

Sputnik discussed the practice of shock therapy at the Judge Rotenberg Educational Center in Massachusetts with Dr. Edward Shorter, professor of the history of medicine and professor of psychiatry at the Faculty of Medicine, University of Toronto.

Sputnik: Could you tell us about gradual electronic decelerators?

Dr. Edward Shorter: It's like a cattle prod. They've been using this for a long time and it has been the source of enormous unhappiness in the child psychiatry community; it's a terrible idea.

Sputnik: Would you consider this torture?

Dr. Edward Shorter: Torture is a big word; this is a medical facility and, generally speaking, in medicine, people don't like the idea that they're applying torture; but it's not therapeutic either. Nobody gets better. It's a form of behavior control, so it's really a form of discipline, not therapy at all.

A lot of people have a problem with the idea of using painful shocks as a form of discipline. In electroconvulsive therapy, ECT, by contrast, there is no pain; people are instantly unconscious and it's highly effective as a form of treatment. So ECT — electroconvulsive therapy — has nothing at all to do with what they are practicing at the Judge Rotenberg Center, and yet even among professionals in North America, these are often confused.

© AP Photo / Steven Senne
US Court Grants School Permission to Use Electric Shock on Children – Reports
And if you tell people who are not up-to-date on ECT, they say: "Oh, that's like what they are doing at the Judge Rotenberg Center with those kids with mental retardation." It's not at all like that; it's been a source of confusion that has plagued the entire ECT community.

ECT is used as a form of behavior control in individuals who can cause harm to themselves and others, that would be a reason for institutionalization. That's not necessarily a reason for ECT; you can also use ECT on outpatients who aren't institutionalized at all.

So ECT has nothing to do with causing harm to themselves and others, ECT is for serious depression, melancholic depression and mania and catatonia, and even sometimes in schizophrenia. So there are a number of legitimate applications for ECT and it's becoming increasingly widespread and is now being mulled in Europe in countries like Germany, Italy, in countries that used to avoid ECT as a holdover from the middle ages and now these countries are embracing ECT because it is so effective.

This has nothing to do with the Judge Rotenberg Center, and aversive therapy and cattle prods and stuff like that and it's just horrible.

Sputnik: Is there any case in which you feel that this could be justifiably applied?

Dr. Edward Shorter: No, there's not. Torture or the deliberate administration of pain is never justified as a therapeutic procedure, this is a therapeutic a facility, it's supposed to make patients better, or at least keep them from getting worse, and there's no reason at all for this kind of treatment.

© AP Photo / Manuel Balce Ceneta
'Most Dangerous Sec. of State Ever': Twitter Pans Albright After She Calls Trump ‘Most Undemocratic' US President
Sputnik: What do you think are the best alternatives for people who have the capacity of hurting themselves or others in a public facility like this?

Dr. Edward Shorter: It's necessary to control the behavior and sometimes it is, they can be sedated with drugs and that would be the standard approach, drugs that calm them down, that's what sedatives are all about and they're actually quite effective. Why they don't use sedatives at the Judge Rotenberg Center is a mystery to me because they are used everywhere else.

But there are lots of drugs that are used in child psychiatry such as —risperidone, for example, which is officially an antipsychotic,  that is used basically as sedatives. They have side effects, but at least the kids don't harm themselves or harm other people; this aversive therapy — it's just not possible to even contemplate this.

The views expressed in this article are solely those of Dr. Edward Shorter and do not necessarily reflect the official position of Sputnik.