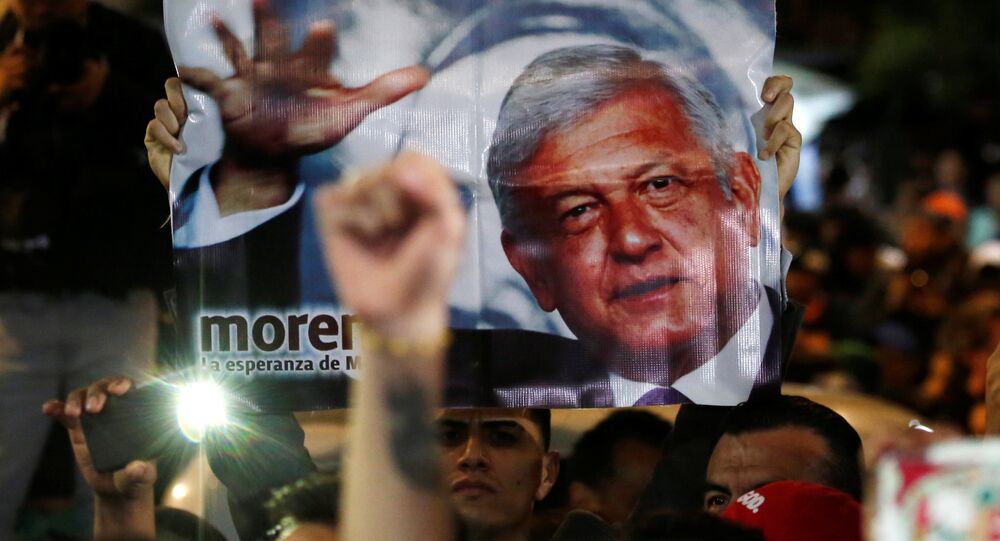 Mexicans have elected leftist Andres Manuel Lopez Obrador as the country's new president. Lopez Obrador secured 53% of the vote, according to the latest count - the most in the history of Mexico’s democracy.

Sputnik: Mr. Obrador has joined the presidential race before. What helped him claim the victory this time?

© REUTERS / Goran Tomasevic
Lopez Obrador 'Captured Stance Most Mexicans Feel About Trump' - Lecturer
Luis Gómez Romero: Well it was foreseen, it was announced since the very beginning of the campaign. Lopez Obrador (remained) the front runner in most of the polls, basically because he was able to channel the deep discontent of the Mexican public with the administration of the incumbent president Enrique Peña Nieto.

Sputnik: Do you think it's his popularity, his platform or the fact that many feel the current party had failed, they had lost a lot of trust and popularity, was it a combination of all of these factors?

Peña Nieto continued with this policy that mainly entails involving the military in law enforcement. So in the last 11 years 230 thousand people have lost their lives in the Mexican drug wars. Obviously, the public is fed up with this level of violence, and they are demanding a change in the approach to this problem.

© REUTERS / Goran Tomasevic
Obrador’s Government Will ‘Enshrine Basic Social Rights, Dignities’ for Mexicans
Sputnik: Do you think that Lopez Obrador is offering something different and how will his approach be different than of Peña Nieto?

Luis Gómez Romero: Lopez Obrador has not actually promised to retire the military immediately, this is impossible; considering that the military has been used in law enforcement the police has been significantly undermined, so what he has proposed is to merge the police and the military into a National Guard under his direct command.

What is new in his approach to this problem is his proposal of an amnesty for petty drug traffickers or peasants who got involved in cultivating drugs.

He has not been very specific about how this is going to be done or how he’s going to implement the plan. However, his advisor have given some details on the amnesty and it has been positive. It’s a form of transitional justice that is a form of pacifying Mexico and a path towards reconciliation.

© REUTERS / Goran Tomasevic
'Listen Up, Trump': Key Issues Mexico's President-Elect Poised to Deal With
Luis Gómez Romero: His diagnosis is accurate, he has said that corruption is at the roots of violence and inequality in Mexico. Peña Nieto's administration has been involved in many scandals in relation to corruption. Peña Nieto's party, the Institutional Revolutionary Party, has ruled Mexico for over 70 years, then it lost the presidency in 2000 and it came back to power in 2012.

In the six years that Peña Nieto was in office, just to give you an example of the extent and the depth of corruption in the party and the regime, Mexico is a federation; it has 32 states plus Mexico City.

There are 14 governors that have been either investigated or have been convicted on corruption charges, and all of this happened under Peña Nieto's watch. What Lopez Obrador has proposed is, basically, to apply the law; a very basic principle is that no one is above the law.

The views and opinions expressed in this article are those of Luis Gómez Romero and do not necessarily reflect Sputnik's position.