On July 3, 1940, following orders from Winston Churchill, British ships bombarded the rump of the French fleet at a port in the Mediterranean. Sputnik looks at what led Churchill to attack and kill 1,300 Vichy French sailors and why they are included on war memorials in France.

The attack at Mers-el-Kebir killed 1,297 French sailors and was used by Hitler and the Vichy regime to stoke up anti-British sentiment in France.

Dr David Lees, a Senior Teaching Fellow in French Studies at the University of Warwick and an expert on the Vichy regime, said the tragedy of Mers-el-Kebir had been conveniently forgotten by French politicians in the last 78 years.

"The dominant legacy of World War Two in France now is about Jewish deportations and things like Mers-el-Kebir have been glossed over. It doesn't suit (President) Macron or others to raise it," Dr. Lees told Sputnik.

Brushed Under The Carpet

But he said many other politicians, including General Charles De Gaulle and Francois Mitterand, had been keen to brush inconvenient history under the carpet and ignore the fact that the majority of French servicemen and politicians served the Vichy regime and collaborated with the Nazis. 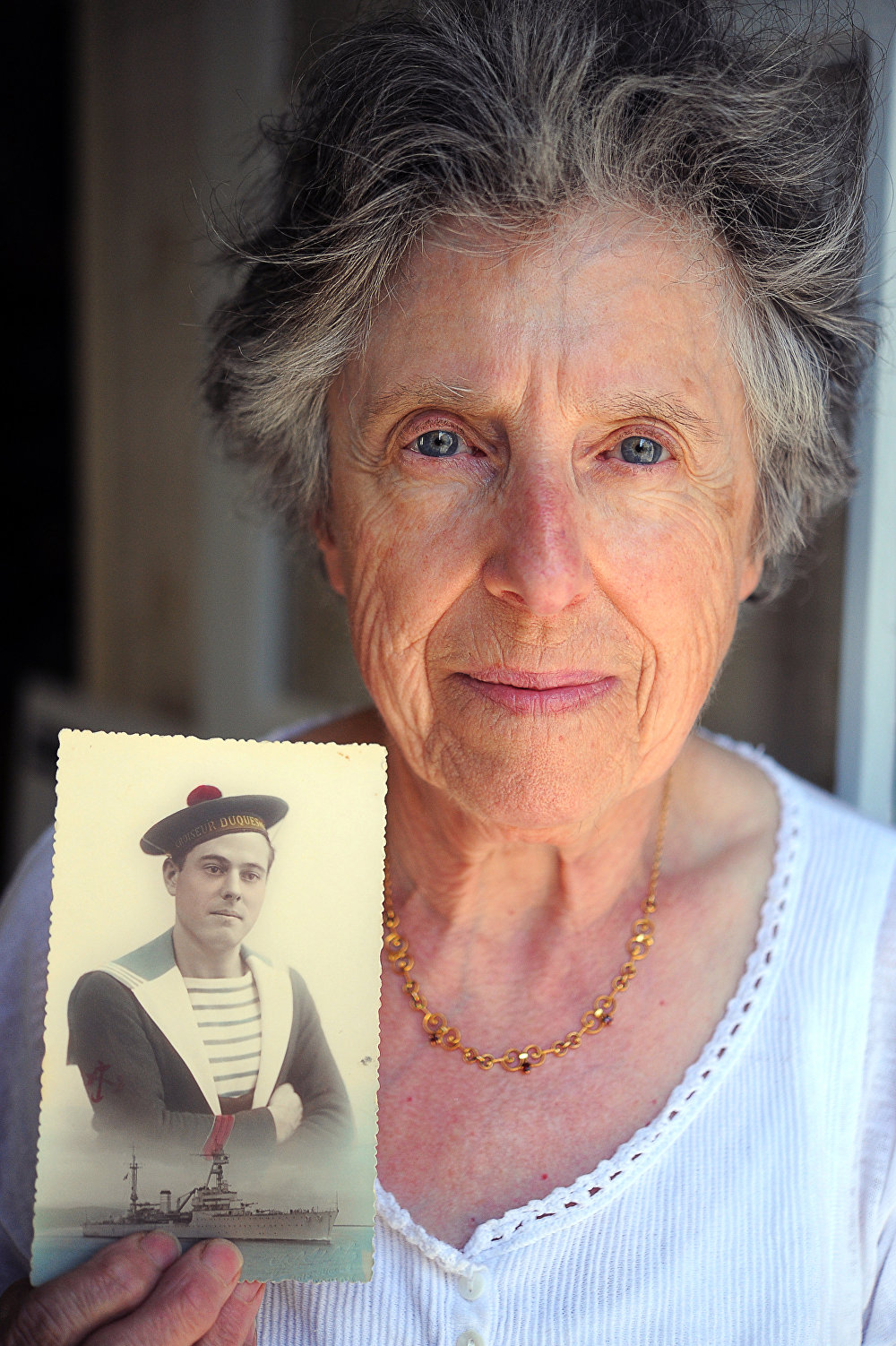 © AP Photo /
Denise Ollivier, from Paimpol in western France, holds a photograph of her father who died at Mers-el-Kebir

Just 12 days before the attack on Mers-el-Kebir, Marshal Philippe Petain — an 84-year-old First World War hero brought back to lead the nation — had signed a shameful armistice with the German invaders.

The northern and western half of the country was handed over to the Germans and the rest of France, including the empire, was left in the hands of Petain's Vichy government.

De Gaulle fled to London and set up the Free French forces, but he had great difficulty persuading French soldiers, sailors, airmen or politicians to carry on the fight.

Iain Ballantyne, editor of the global naval news magazine Warships International Fleet Review and author of The Deadly Trade: The Complete History of Submarine Warfare from Archimedes to the Present, said Royal Navy commanders feared the French fleet — one of the most modern in Europe — would end up in the hands of the Germans, something they could not allow.

"France did possess a powerful and largely modern fleet, though part of the reason for its modernity was that, in common with other major naval powers between the world wars, it constructed very few new vessels, so in the 1930s it was compelled to create a new fleet, especially to match German naval rearmament. The fact that Italy — another likely foe in any future war — also embarked on a programme of constructing a new battle fleet likewise forced the French to order new battleships, notably the Richelieu Class of 35,000 tons displacement, with eight 15-inch guns, and Dunkerque Class battleships of 26,000 tons, with eight 13-inch guns. By the late 1930s, the French had ordered construction of around 80 surface warships, submarines and other vessels," Mr. Ballantyne told Sputnik.

"As a precaution by the time of the armistice, the key battleships and other units had already been sent to French North African naval bases to try and put them beyond the clutches of the Germans… The terms of the armistice signed by the French in June 1940 were meant to include a clause, a formal promise from the Germans, that the French Navy's most powerful warships could not be used against Britain — however, when made public the armistice terms called for all but a few minor war vessels to return home to France — the Germans promising not to use them against the British nonetheless," Mr. Ballantyne told Sputnik.

"Britain felt very nervous about German reassurances, even those that might be formalised in the armistice. Added to this was hostility from the Vichy French towards Britain," Mr. Ballantyne told Sputnik.

For those unaware: the Vichy French give during WWII started by separating immigrant Jews from their children & deporting them while holding their children in “shelters.” This was done to weaken resistance & break their will. It worked then like it works now.

At Mers-el-Kebir in the early hours of July 3, 1940, the French commander, Admiral Marcel‐Bruno Gensoul, received an ultimatum penned by Winston Churchill, the British prime minister and a former First Lord of the Admiralty.

"Britain decided the French must either sail their major warships to ports across the Atlantic, where they would be firmly out of the way, or they should ‘demilitarise' them by spiking their guns…in the summer of 1940, with invasion fears at their height, the Royal Navy was reasonably confident of destroying an attempt by the much smaller German Navy to ferry troops to assault British beaches, but, if somehow, the Vichy French battleships and other units were persuaded to support such an operation, the odds could be tipped against Britain at sea," Mr. Ballantyne told Sputnik.

A powerful Royal Navy taskforce, led by HMS Hood, opened fire on the French ships, anchored in the bay of Oran in the French colony of Algeria, and destroyed the battleship Bretagne.

Two other warships — the Dunkerque and the Mogador — were badly damaged and a further air and sea attack on July 6 put most of the ships at Mers-el-Kebir out of action.

Mers-el-Kebir posed a major conundrum for De Gaulle but he reluctantly gave his support for the attack.

"No Frenchman worthy of the name can for a moment doubt that a British defeat would seal for ever his country's bondage. Our two great peoples are still linked together. Either they will both succumb, or they will triumph side by side," De Gaulle said in a speech broadcast on the BBC the following day in which he also lamented the deaths.

"Some French sailors seemed to have am ambivalent attitude to carrying on the fight, especially if it meant taking orders from the British," said Mr Ballantyne, who pointed out that even the crews of French ships which were in British ports at the time of the armistice showed little appetite for fighting the Germans.

Most of the crew of the French submarine Surcouf, which was docked at Plymouth in 1940, chose repatriation rather than joining the Free French.

"It has to be said that a number of Free French warships fought valiantly alongside the Allies, not least in the Battle of the Atlantic — sinking U-boats — while quite a number of French sailors actually joined the Royal Navy, including one who was aboard HMS Rodney, the British battleship that played a leading role in destroying the German battleship Bismarck in May 1941," Mr. Ballantyne told Sputnik.

Free French Were Seen As 'Renegades'

Mr. Ballantyne pointed out the Vichy regime had inherited the administration of France, including its navy, and it was Free French under De Gaulle who were the "renegades".

Bought a postcard of the French battleship Bretagne (1912). She was sunk in 1940 in the Algerian harbour of Mers-el-Kébir by the British who were afraid the Germans would seize the ship. 977 of her crew were killed. #WW1 #WW2 https://t.co/r3YEUIFDVh pic.twitter.com/A4iNkv8qza

"Add to that Gallic pride and the centuries-old rivalry — and hostility — towards the British that lay below the surface of the Entente Cordiale and you have an explosive mix — why should the French give up their magnificent battle fleet to the ‘Rosbifs'?" Mr. Ballantyne told Sputnik.

When, in November 1942, US troops landed in French North Africa, as part of Operation Torch, to help British forces fighting the Italians and Germans in Libya, Vichy French forces fought them, with many commanders urging their men to remember those killed at Mers-el-Kebir.

Dr. Lees said in 1944 the Vichy French minister of propaganda, Philippe Henriot, used the "ghosts of Mars-el-Kebir" in an effort to stoke up Anglophobia as the German army retreated on the Eastern Front.

Henriot was assassinated by the French resistance, the Maquis, three weeks after the D-Day landings.

The 1,300 French soldiers who fought against the Allies during Operation Torch are also commemorated on war memorials in France.

There were also Frenchmen on the Nazi side on the Eastern Front.

Half of those who served in the Légion des Volontaires Français (Legion of French Volunteers Against Bolshevism), died of wounds or frostbite while fighting alongside the Germans outside Moscow.

Dr. Lees said the Vichy regime never wanted "all-out war" against the allies and Petain continued to hedge his bets throughout the war.

Discussion of surrender of French Fleet in 1914 — potential for an early Mers-el-Kebir?! pic.twitter.com/BcTxwobhJq

When the war was over some Vichy leaders, such as Prime Minister Pierre Laval, were executed and thousands of French women who had slept with German soldiers had their heads shaved but most collaborators avoided justice and some rose to very high positions.

Maurice Papon, who assisted with the deportation of Jews from Bordeaux, became Prefect of Police in Paris in the 1960s.

"De Gaulle was reluctant to draw on Mers-el-Kebir. He didn't push it forward. The fact that we have such close relationships between the French and British navies is partly due to De Gaulle," Dr. Lees told Sputnik.