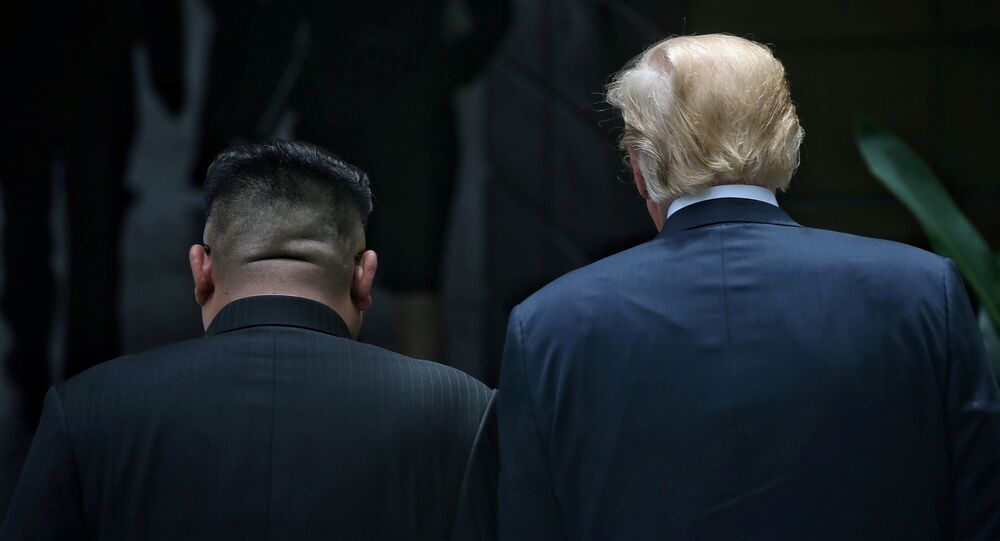 Recently released satellite images showed clear signs of construction and significant improvement at major nuclear sites in North Korea, including a missile-manufacturing facility in the city of Hamhung and the Yongbyon Nuclear Scientific Research Center, US press reported this week.

At the same time, unnamed US intelligence officials have been quoted as alleging North Korea of not willing to fully surrender its nuclear arsenal and trying to conceal its nuclear weapons and secret production facilities, citing newly obtained evidence. The new evidence has been collected after the historic summit between US President Donald Trump and North Korean leader Kim Jong-un on June 12, when both sides reiterated their commitment to complete denuclearization on the Korean peninsula, US press reported.

As Pyongyang is fully aware of the methods in which US intelligence agencies such as the Defense Intelligence Agency (DIA) gather information about its nuclear programs, usually through analysis of satellite imagery, North Korea could be trying to send a message and improve its bargaining leverage against the United States in future negotiations on denuclearization, political analysts suggested.

"I think North Korea is onto something, as I expressed before that Pyongyang plans to maintain its core nuclear weapons capabilities. I believe it’s a way for North Korea to enhance its bargaining leverage against the United States. While doing something to please the US side, North Korea is also improving its nuclear capabilities. Their message is: if you want us to dismantle our nuclear weapons, you have to give us more, such as lifting sanctions. I think North Korea knows that the US DIA has capabilities to detect their recent activities. It [the expansion of nuclear sites] could be intentional," Kim Jae-chun, an international relations professor at Sogang University in Seoul and a former South Korean government adviser, told Sputnik.

Other nuclear experts argued that the continued improvement of major nuclear facilities in North Korea only demonstrated Pyongyang’s lack of sincerity in denuclearization, but may not be an international message to the United States that could damage improved bilateral relations.

"My personal view is that it [the expansion at major nuclear facilities] has shown North Korea does not intend to give up its nuclear weapons quickly. I have always believed Pyongyang is trying to prolong the negotiations with the United States as long as possible to protect its existing nuclear capabilities. But we shouldn’t over-interpret North Korea’s intentions, because, strategically, North Korea does not have to be provocative, confrontational or uncooperative against the United States under the current circumstances. North Korea’s strategic goal is to develop a long-lasting, stable and positive relationship with the United States from now on. There’s no reason for Pyongyang to destroy the newly established improved image in the eyes of the United States," Zhao Tong, a fellow at Carnegie’s Nuclear Policy Program at the Carnegie-Tsinghua Center for Global Policy in Beijing, told Sputnik.

Despite Trump trying to present his summit with Kim Jong-un as a historic success, the US president faced enormous domestic pressure following the summit in Singapore as US politicians and political analysts bombarded him for failing to produce a more concrete agreement with North Korea with specific details on denuclearization.

How the US president will respond to fresh domestic criticism, following the new evidence of North Korea failing to keep its promise on "complete denuclearization," depends on whether Trump still has "fantasy" about Pyongyang’s pledges, Zhao from the Carnegie-Tsinghua Center for Global Policy explained.

"Predicting Trump’s response is the most difficult task, as there’s almost no reference to rely on. Theoretically, it all depends on whether Trump has already understood that North Korea has no intention of giving up its nuclear weapons, or he still holds out the 'fantasy' that the North Korean leader is committed to a completely new path. If this ‘fantasy’ has been destroyed by fresh evidence in the news and Trump felt his dignity has been hurt, he could respond strongly with a sharp change of attitude against North Korea. But if he doesn’t hold such ‘fantasy' and only wants to maintain a good public image as a successful leader, Trump could try to divert people’s attention and not respond to such criticism," he said.

The expert added that Trump is set to face continued domestic political pressure over North Korea’s commitment to denuclearization, as US senators called for more stringent congressional oversight over US nuclear diplomacy with North Korea this week and demanded to receive written updates every 30 days.

Amid rapid progress of North Korea’s nuclear arms program last year, the Trump administration adopted a policy of economic and diplomatic isolation, known as the "maximum pressure campaign," to rein in Pyongyang’s nuclear ambitions. A large number of nations in the international community, including North Korea’s major trading partner China, agreed to join the efforts in restraining Pyongyang both economically and diplomatically.

However, after Kim Jong-un started to seek dialogue and break the diplomatic isolation since the beginning of this year, Pyongyang’s relations with a number of neighboring countries including South Korea, China and Russia, improved significantly in recent months. Before his first meeting with Kim Jong-un in June, Trump even said he does not want to use the term "maximum pressure" anymore because the United States and North Korea are "getting along."

As a result, Professor Kim from the Sogang University believes that Trump has lost all his leverage in negotiations with North Korea.

The expert pointed out that, unlike the situation in 2017, when North Korea’s nuclear arms program advanced rapidly, the international community is no longer united in backing the US-led efforts to isolate and punish Pyongyang, as Kim Jong Un has improved relations with key neighbors such as South Korea, China and Russia.