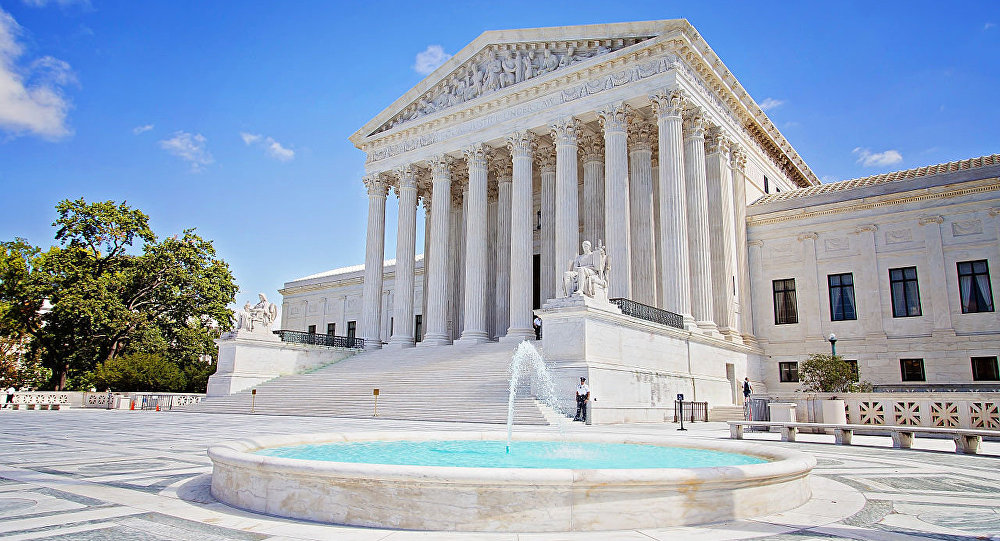 ‘Another Very Conservative Justice Would Rally Trump's Republican Base' - Prof.

US President Donald Trump has said that the search for a candidate to replace the retiring Supreme Court justice will begin immediately. Speaking at a rally in North Dakota, Trump said that the new associate justice will have to be there for decades to come.

81-year old Anthony Kennedy announced his resignation on Wednesday, saying that he wanted to spend more time with his family. Sputnik talked about the appointment of a new US Supreme Court justice with John Plecnik, associate professor of law at Cleveland-Marshall College of Law.

Sputnik: How will the new appointee shift the balance in the Supreme Court? Perhaps you can explain to our listeners how this is possible, if it is possible?

John Plecnik: Number one, there are nine members of the US Supreme Court, and as you just shared a lot of decisions have been going 5 to 4, so one justice often makes the difference in a decision. Justice Kennedy had a reputation for being the swing justice; he was often the hardest to predict, wasn't reliably conservative or reliably liberal, so it's a "how goes Kennedy, goes the court"; so his replacement might well decide a lot of cases.

John Plecnik: Well I would say that Justice Kennedy tended to be very conservative when it came to rulings on business or commerce, where he tended to be more liberal or moderate were on social issues such as abortion or same-sex marriage. If someone who is 100% conservative were appointed to the court I don't think you'd see many rulings change with respect to business or government, I think you'd see a lot more change on social issues, particularly, possibly abortion.

Sputnik: How big a loss would another conservative candidate in the Supreme Court be for the Democratic Party in the United States?

John Plecnik: I think it's particularly difficult for the Democratic Party that this is happening in an election year, Donald Trump has a lot of issues with the Republican base because he wasn't always a Republican and so many Republicans or real conservatives would say Donald Trump used to be a Democrat, he used to be an Independent; but what always brought those voters home was the fact that he promised to appoint very conservative Supreme Court justices and he actually issued two different lists in 2016 of people who he would consider appointing to the Supreme Court and that did a lot to rally the conservative base, because many of them didn't think Mr. Trump was really conservative, but they loved the list of justices that he proposed. I think that if he appoints someone in the vein of Justice Gorsuch, another very conservative justice, it would certainly rally the Republican base and I think you'd see a lot more Republicans come out to vote this fall.

Sputnik: What if anything can the US Democrats do to affect or influence this situation that's happening with the selection of the next Supreme Court judge? Can they do anything? Can any pressure be put to bear in terms of a pick that they want to influence or is that just impossible in this particular circumstance?

John Plecnik: I'd say the only political avenue the Democrats have is to try to split the Republican Party. What had happened in the last administration under President Obama is the Democrats in control of the Senate changed the rules so they could appoint lower court judges without a filibuster, and I'm not sure if your listeners are familiar with a filibuster, but the general rule in the Senate it is that you can prevent a vote from taking place as long as you have at least 41 Senators who want to continue speaking in filibuster and block the vote, but 60 Senators can break a filibuster; and so to some extent even if you had the majority, if you have less than 60 votes, you couldn't proceed.

Following in the vein of what the Democrats did under President Obama, the Republicans changed the rule, and this is sometimes called the nuclear option, to allow for the Supreme Court, not just the appellate courts but the Supreme Court, nominations to go through without a filibuster. So Democrats don't have the ability to filibuster whoever Donald Trump nominates, the Senate rules are changed now so that a bare majority of 51 votes will do, but that's all the Republicans really have, a bare majority. If the Democrats want to influence this pick, they need to find a handful of Republicans who would be willing to switch sides, so that's probably their only political avenue; but if the Republicans stay united. they can appoint anyone they want.

Sputnik: When President Trump first came to power 18 months ago, he was initiating these travel bans on various Muslim countries from the Middle East, they were continually thrown out by the Supreme Court. Is this a situation now that is going to give President Trump more leverage over the next 18 months? If he gets another term and adds another four years to that 18 months, is this going to be something that's going to be in that sort of 5,5 - 6 year period beneficial to him?

John Plecnik: It's hard to imagine that his nominees would be opposed to his policies; one would think that Donald Trump would nominate judges, justices who generally agree with the constitutionality of the policies he's already put forward. He could make a mistake, he can nominate someone who doesn't and be surprised, but I tend to agree with you, that yes, it makes it all the more likely that his travel bans and policies will be a upheld going forward because President Trump has said, he's looking to nominate people who is share his philosophy, so one should only presume that he'll have more latitude in these issues.

The views and opinions expressed by contributor do not necessarily reflect those of Sputnik.