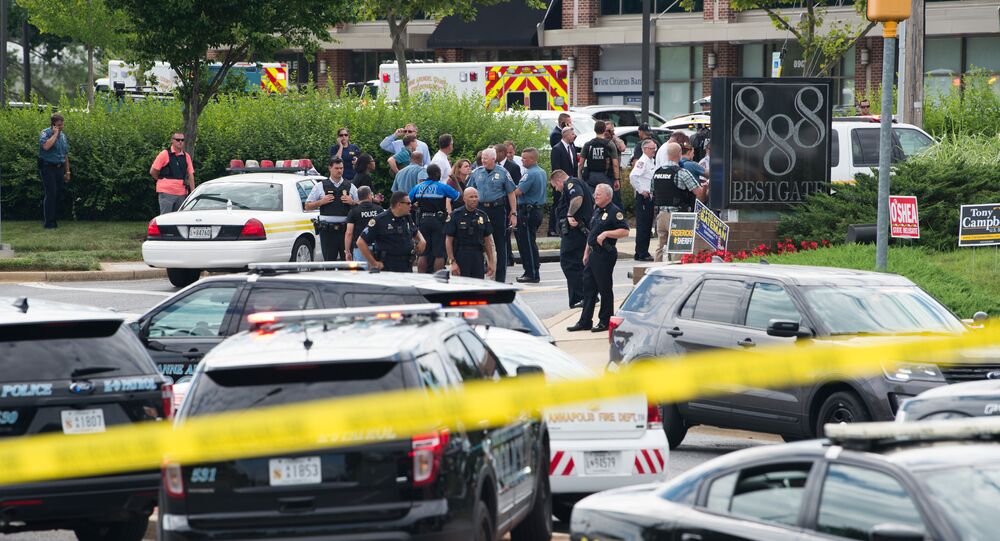 Prof on White House Reaction to Mass Shootings: 'Nothing Practical Is Ever Done'

Sputnik discussed the situation around the deadly mass shooting at the Maryland newspaper's office with Peter Squires, Professor of Criminology and Public Policy in the School of Applied Social Science at Brighton University.

A Maryland newspaper has continued to publish despite a deadly mass shooting that left five of its staff dead. Staff at the Capital Gazette have published a Friday edition, after a gunman killed five people and injured two more at the local paper's office. In the immediate aftermath Chase Cook, a reporter at the Annapolis publication, tweeted: We are putting out a damn paper tomorrow. His post came just hours after the attacker, armed with a shotgun and smoke grenades, shot through a glass door into the newsroom. Police called the shooting a "targeted attack".

© AFP 2020 / IAN LANGSTON
Trump on Maryland Newspaper Shooting: Press Should Be Secured, Free of Fear
Sputnik: Another shooting in the US, will this latest attack have an impact on US gun control?

Peter Squires: There’s another mass shooting every week, we have to put it in to that perspective and this far the ability of the gun control lobby sufficient traction has been pretty disappointing. I think the unfortunate answer I have to that question I doubt it. There are signs and evidence that younger people are becoming more supportive of gun control, there is evidence the black and ethnic minority communities are supportive of gun control but there is no more money in control with Bloomberg every town movement. There are signs of potential progress.

Sputnik: Will the latest shooting have an effect on coverage of mass shootings in America?

Peter Squires: If you look at the coverage and this is something I’ve been involved in directly and indirectly, there’s a tendency in the initial reporting to focus on the drama, the flashing blue lights, the police response the horror and the highly personalised traumatic reaction, it’s often only later we see people digging down into why did this person have a gun? Whether this person was qualified really or legally entitled to own a gun. Secondly the broader gun culture which surrounds it and sometimes the reporting and interest doesn’t stay with the story.

Google Maps
Police Say Suspect Had 'Vendetta' Against Maryland Newspaper After Deadly Shooting
Sputnik: What did you make of the reaction by the White House to the attack?

Peter Squires: We’ve seen it before they take the stance of not saying anything tangible about it. We get this idea that the White House and its staff say their prayers and grieve for the suffering of the victims and condolences are said. But nothing practical is ever done, the Florida school shooting of a few months ago did seem to provoke Trump suggesting a number of steps forward in particular aspects of gun control, but the following day he had a meeting with leading NRA members and was very quickly pulled back into line and retracted all the positive suggestions he made. I think Trump is a bit of a straw in the wind.