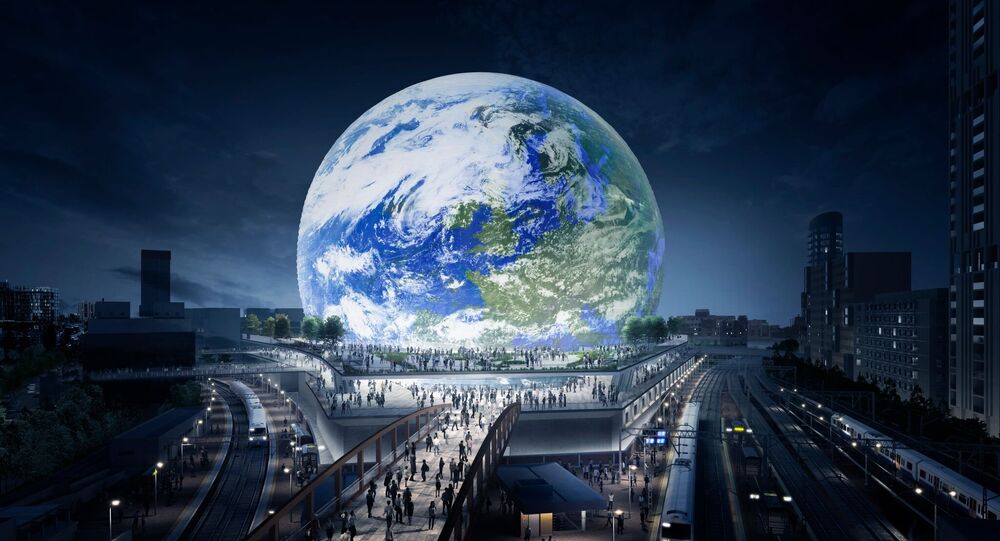 The owners of Madison Square Garden in New York are planning to build two huge globe-shaped music and live show venues in London and Las Vegas. Sputnik spoke to a sound expert from the University of Southern California about the acoustic challenges facing the MSG Spheres.

The MSG Sphere in London will be located next to Stratford station, close to where the city hosted the Olympics in 2012.

Next month the company behind it, which owns the famous Madison Square Garden in New York, will be hosting public exhibitions in London and also launching an online consultation on a special website to find out what Londoners want from the venue.

MSG say the new theaters in London and Las Vegas will be "groundbreaking" and will offer the most "immersive" experience ever but what can be so different about the venues acoustically?

We gave @MayaJama a behind-the-scenes look at the groundbreaking technology planned for @MSGLondon. WATCH her experience the future of live music and entertainment: pic.twitter.com/8LMGvWuiHJ

​MSG Sphere Will Use 'Beamforming'

Chris Kyriakakis, Professor of Audio Signal Processing at the USC Viterbi School of Engineering in Los Angeles, said MSG have talked of "beamforming", which is a method of using multiple closely-spaced loudspeakers to create narrow beams of sound that can be pointed in one or more directions, which is used in products such as the Amazon Echo.

"But to achieve a narrow beam over the very wide range of frequencies of music content, a very large number of loudspeakers would be needed, most likely hundreds. These would have to be small so that they can be placed close to each other, but this has a negative effect on their ability to reproduce bass as small speaker drivers are not capable of pushing enough air to reproduce low bass frequencies. There is a claim that the floor has transducers that somehow reproduce bass, but no details have been provided in the marketing materials," Professor Kyriakakis told Sputnik.

Just been to an amazing presentation of MSG’s Sphere. Concert goers be excited. I certainly was. Coming to London 2022. #gigwithadifference

​"Even with a sufficiently large number of speakers, it is very difficult to produce multiple beams of sound in different directions. And if one could do that, where would they be pointed? Presumably the audience is somewhere in the middle of the sphere so it is not clear at all what the purpose of multiple beams would be, assuming they could be created in the first place," Prof. Kyriakakis told Sputnik.

Artists Will Be Able To Use Huge LED Exterior Screens

The 18,000-seater MSG Sphere will include the largest and highest resolution LED screen ever created, along with a fully programmable LED exterior that will allow artists and brands to project images to the outside world.

"Our vision is for MSG Sphere London to become a thriving destination that not only shapes the future of live music and entertainment for audiences, but also serves as a long-term investment in the city," said Jayne McGivern, MSG's executive vice president of development and construction.

​But Prof. Kyriakakis foresees problems with the spherical shape and LED walls.

"In the Sphere, it appears that the 'walls' are visual displays and that means surfaces that are highly reflective for sound.  This could be one reason for requiring a highly directive beam: to direct the sound to the audience and away from the walls.  It's difficult to achieve over a wide frequency range. Technologies such as Wave Field Synthesis have demonstrated that this is possible, but I have only seen application of this in rectangular rooms. Spherical (curved) surfaces present a problem: Sound that reflects from such surfaces tends to focus in certain spots in the room (analogous to what happens to light with spherical mirrors) and this would cause those spots to be louder than others in the room," Prof. Kyriakakis told Sputnik.

The MSG Sphere Las Vegas, an 18,000-seat arena targeted at concerts, shows and fights, will begin construction this year and open in 2020. The arena will have a 170,000-square-foot LED screen wrapping the inside. The outside will have 580,000-square-feet of programmable screens. pic.twitter.com/566b07wP3y

MSG London say the Sphere will have a "dynamically adaptive acoustics system that will deliver crystal clear audio to every guest, no matter the size or type of event."

Improvements In Acoustics Since 1922

Concert hall acoustics have improved significantly in the last 100 years.

"The understanding of the factors that influence concert hall acoustics has grown significantly since Wallace Sabine published his work ‘Collected Papers on Acoustics' in 1922.  We now have a very good understanding of the role of reverberation and how it is related to the volume of the space and the amount of absorption, as well as the role of other architectural features," Prof. Kyriakakis told Sputnik.

"Of very high importance in our perception of a ‘good' space, is the role of sound reflections.  The timing of these reflections that arrive after the direct sound influences our perception of how big the space is and also the size of the sound source. Acousticians work hard at designing venues that produce the optimum combination of direct and reflected sound," Prof. Kyriakakis told Sputnik.

On June 13, 1868, American physicist Wallace Clement Sabine was born. Sabine founded the field of architectural acoustics as the outcome of his investigations on the effect of absorption on reverberation time.https://t.co/XLQFf5NiAg

"The use of computer algorithms in the acoustic design went well beyond what had ever been done before," he told Sputnik.

"In the case of the Sphere we are talking about sound reproduced from loudspeakers and not from acoustic performances of orchestras or bands.  Loudspeaker sound is also influenced greatly by the acoustical characteristics of the space.  In movie theaters, for example, the acoustic design of the space calls for a great deal of absorption on the walls to minimize the effects of reflections.  The film sound designers control the content (both direct and ambient) in the production process and don't want any changes to it from the room," he told Sputnik.

The Caves That Sing: Amazing Acoustics of Iceland's Depths