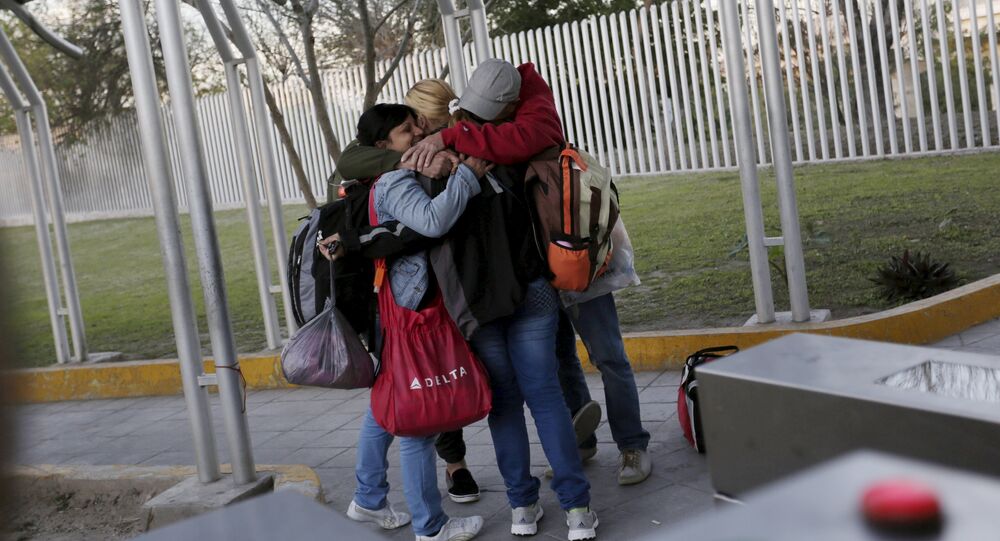 El PASO, TEXAS (Sputnik) - Thousands of Central Americans have fled to US border in pursuit of the American dream, but had to face hardships of Trump administration's "zero-tolerance" policy on illegal immigration. Sputnik spoke to several immigrant parents for an insight into the situation.

Nelvin, who is an immigrant from Honduras, quickly discovered he was chasing a mirage of the American dream. Immigration authorities separated him from his 17-year-old son after illegal entry through the US southwestern border.

The pain felt by Nelvin is a direct result of the "zero tolerance" illegal immigration policy the Trump administration unveiled in April, which has led to thousands of children being separated from their families at the US-Mexico border.

"My son, I couldn’t find out where he was for the one month I was in custody," Nelvin told Sputnik. "Yesterday I was able to contact my brother and he told me he had been in touch with my son. My son is in New York."

As a result of the policy, nearly 2,000 immigrant children were forcibly separated from their parents between April 19 and May 31 following arrests in connection with illegal entry into the United States, according to the Department of Homeland Security (DHS). As of June, the number jumped to more than 2,300 according to recent media reports.

US Border Policy: Law Enforcement vs "Concentration Camps"
The journey to the United States was strenuous, Nevlin said. He recalled starving and underscored the complications of navigating one’s route to the border.

Nelvin said he attempted to seek asylum at the port of entry, but was turned away by immigration authorities. Fearing kidnapping on the Mexican side of the border, Nelvin said he crossed the border away from the checkpoint to intentionally get caught and detained.

However, until Sunday, Nelvin was one of 32 immigrants that arrived in El Paso, Texas to be received by rights group Annunciation House after they were released from jail so they can begin the process of reuniting with their children.

"I don’t know how we’re going to do it without our kids because we have to be present at court and supposedly have to take our kids, too," Nelvin said.

Of the 32 parents, only three have spoken to their child since they were separated, the group’s legal coordinator Taylor Levy said, adding that the average time the parents spent in detention is 25 days.

"What the administration is doing is not appropriate, we’re all human. We need to pray to God for the people who still have hard hearts," Nelvin said.

Sulman, a single mother and immigrant from Guatemala, was burdened with bad news when she reached the US-Mexico border with her 12-year-old son after a 19-day journey in May.

Sulman told Sputnik she was separated from her child and taken into custody for prosecution for illegal entry into the United States.

"I asked them why I was being jailed if we were fleeing from a country that isn’t doing well, and in my case, fleeing from domestic violence," Sulman said. "I told them I have proof to show them what I’m saying is true, but they told me at the moment it was not important to them."

© AFP 2021 / Sandy Huffaker
'That's the Parents' Responsibility' - Pundit on Families Separated at US Border
US Attorney General Jeff Sessions said on June 11 that migrants from Central American countries cannot seek asylum in the United States on the basis of gang violence or domestic abuse.

Sulman spent 26 days in jail, where she said they were treated badly, without knowing where immigration authorities had taken her child. Authorities gave Sulman a number to reach her son, but the number didn’t work, she noted.

"They never answered a call or they’d turn off the telephones," Sulman said.

A social worker notified Sulman that they found her child and would be connecting them later Monday evening, she said. He was taken to the city of Denver in the US state of Colorado.

"This is [zero-tolerance policy] is very bad, it can cause psychological problems for children by separating us from them, Sulman said. "As parents, we’ve suffered. In jail we wouldn’t eat well and they treated us like criminals."

She continued, "I’ve always worked hard to make sure my kid has to eat."

Sulman’s testimony of the trip from Guatemala to the US-Mexico border shared the same hardships as many others. She said she and her son faced hunger and extreme thirst for the duration of the trip. She noted her friends were assaulted during the trip.

The current immigration crisis at the US-Mexico border is a result of the negative rhetoric coming out against immigrants, founder of the Annunciation House Ruben Garcia said.

"I think it is the result of this constant mantra that criminalizes the refugee. This insidious, never ending, conscientious effort to criminalize the immigrant," Garcia said. "To continually use phrases that they’re drug traffickers, that they’re rapists, that they’re murderers, that they come to take from you relentlessly, the vast majority of which is untrue."

© AP Photo / Guillermo Arias
Immigrant Parents Report Losing All Communication With Kids After Separation at US-Mexico Border
The US Department of Health and Human Services earlier said parents and children were in constant contact through some form of communication during their separation.

He added they expect to receive more immigrant parents at the Annunciation House to aid them in the process of reuniting with their kids.

Although some immigrant parents appear to be released from jail, the crisis on the border is not defused yet.

Earlier on Monday, Secretary of Defense Jim Mattis announced that two military bases in Texas will provide temporary shelter for undocumented immigrants. The US military will provide the Department of Homeland Security whatever support it needs to house the immigrants that the department has under their custody, Mattis added.

READ MORE: US Immigration Are Laws Weakest and Worst in the World — Trump on Twitter

On Wednesday, Trump signed an executive order purportedly designed to prevent the separation of children from parents who are apprehended for illegal border crossings. The "zero-tolerance" policy remains in place but the directive seeks to detain the immigrant families together. Trump’s order directs Attorney General Jeff Sessions to seek changes in what is referred to as the "Flores" settlement agreement in order to detain children longer.

© REUTERS / David Swanson/The Philadelphia Inquirer
US Lawmaker Gives Mike Pence Middle Finger Welcome Amid Trump's Immigration Policy
The 9th Circuit federal court ruled that under the agreement the United States cannot hold immigrant children for more than 20 days even if they are with their parents.

Second Vice President of the American Immigration Lawyers Association Allen Orr told Sputnik last week that Trump’s order is problematic because it would require the detention of children for more than 20 days, something that was settled under the Flores agreement.

The immigration lawyer was referring to Trump’s bid to impose a travel ban on immigrants from five Muslim countries in addition to Venezuela and North Korea. The case has gone through a prolonged and fierce legal battle all the way up to the Supreme Court.