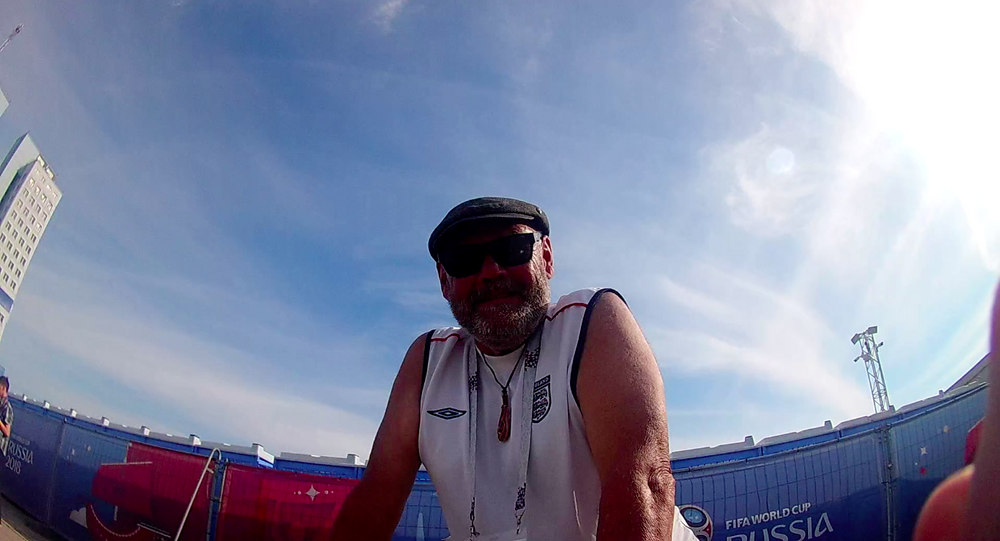 The England fans are out and about on the streets of Kaliningrad. In this very place, on Thursday afternoon, England will go head to head against Belgium. It’s the game that will decide whether England will come second, and enter the round of 16 in Moscow, or win, and play off in the Southern City of Rostov-On-Don.

Sputnik correspondent Maud Start spoke to Tony, a man who has travelled all the way from New Zealand to be in Russia, for his tenth World Cup tournament. Originally from Britain, Tony Plower is a true veteran of the championships. Tony believes that ‘it is coming home’.

Sputnik (Maud Start): Out of all the countries you have travelled to so far, what has been your world cup highlight?

Tony Plower: Out of all of them? Japan. Because I’m a big guy. In Japan, everyone wants to be photographed with the big guy. They’d come up and say ‘Buddah!’, rubbing my round belly for the camera.

Sputnik (Maud Start): Alright, you’re originally from England, were you aware of the scare factory that was churning out scare-mongerey in the press in the run up to the World Cup?

Tony Plower: No, in New Zealand there was really nothing of the sort. Although New Zealand will support Britain’s position, they’ve never reached the extent of saying: ‘No, don’t go to the World Cup, it’s too dangerous’.

Sputnik (Maud Start): OK, and will you be going to go to Qatar?

Tony Plower: No, I’ll be too old, I’m sixty-four. The travel insurance gets too expensive. In Brazil I got robbed. I lost everything. On my insurance, as a younger man of sixty, they had everything waiting for me, a new card and all, in the hotel the next morning. That doesn’t happen over sixty, it just gets too expensive. But also, I am going bald, and that’s putting me off.

Sputnik (Maud Start): Are you predicting that England will win the World Cup this year? Have you ever seen a win?

Tony Plower: I have seen England win once, when I was twelve. We were in Torquay, and I kicked up such a fuss with my mum and dad in the hotel we were staying at, that the hotel manager went out and bought a colour TV. They charged 50 pence for anyone wanting to watch the Cup final. I still have the World Cup ‘Willy’ sticker on the wall at home. You see how the emblem here today is a Wolf. In 1966, it was a World Cup Willy. I still have the badge on the back of that photograph.

I’ll tell you what, if you were to ask me to name that team, I could name it.

Sputnik (Maud Start): OK will you do it then?

Sputnik (Maud Start): Excellent! And if you hadn’t had been following the World Cup tournaments, do you think you would have travelled to all of those countries?

Tony Plower: No, not at all. It was an absolute incentive to travel. I wouldn’t have done it were it not for the World Cup’s. And for that I thank football.

Sputnik (Maud Start): Would you like England to win tomorrow, or would you rather they go for the easier route and lose against Belgium?

Tony Plower: No, I want them to win. I want them to do the best they can do throughout. It’s what Germany normally does, (before today at least). They just get better and better throughout the tournament. But could England actually win? Well, I have been disappointed too many times to put my eggs into that basket.