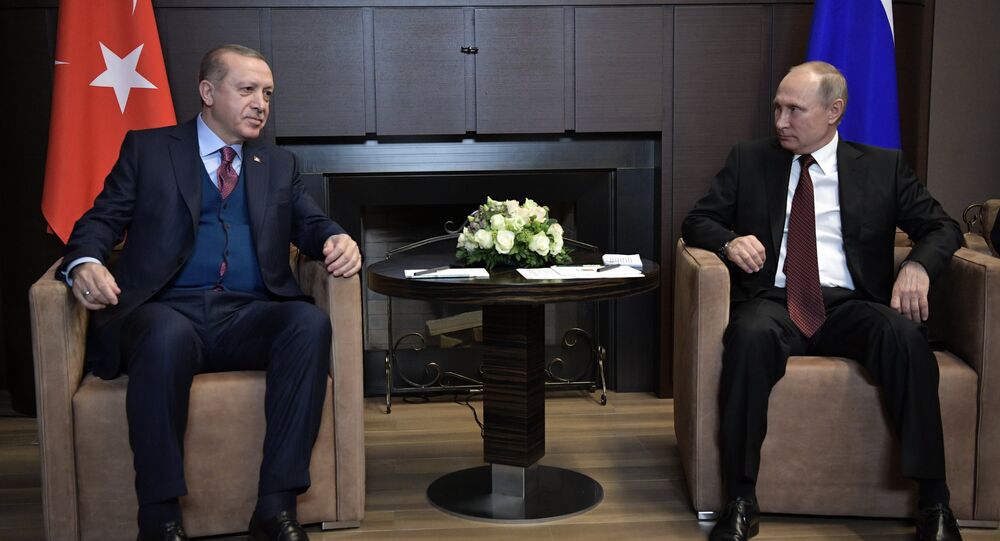 Washington has been struggling to convince Ankara to abandon the deal to buy S-400 defense systems from Moscow, with Assistant Secretary of State for European and Eurasian Affairs Wess Mitchell recently saying that Turkey will face "consequences" if it purchases Russian missile systems.

Sputnik discussed the reasons behind the harsh reaction from Washington towards Ankara in relation to its acquisition of Russian S-400s with Amur Hajiyev, the head of the center for modern Turkish studies at the Institute of Oriental Studies of the Russian Academy of Sciences.

He expressed the opinion that the US is attempting to maintain its influence on Turkey, since the latest developments demonstrate that Washington's grip is lessening. Hajiyev said Ankara is gaining more independence due to its Eurasian and specifically Russian vector of foreign policy.

"Of course, it troubles the West. The prospect of Turkey becoming an independent actor in the region is not something western countries want. The rapprochement between Turkey and Russia leads the West to losing leverage in relations with Ankara. And the West understands that," the scholar said.

Hajiyev noted that S-400 acquisition is not the only thing troubling Western countries. Cooperation with Russia on the Syrian problem, Turkish stream and Akkuyu nuclear power plant contradict the West's vision of Turkey as a "conduit" for its policy in the region.

"The West was not ready to see Turkey conduct an independent multidirectional foreign policy," Hajiyev said.

Faruk Logoglu, former deputy foreign minister and former Turkish ambassador to the US recalled in his interview with Sputnik, that the S-400 issue has been discussed in the US congress multiple times and noted that the recent warnings about possible "consequences" come as no surprise.

"They [such statements] represent a general attitude in the US Congress towards Turkey, which can be seen not only in regards to the purchase of S-400, but also in other aspects of US-Turkish bilateral relations. In the end, I don't think this will actually lead to sanctions against Turkey," the former diplomat said.

Logoglu also stated that Ankara's decision to purchase S-400 systems is "final and irreversible" and that its NATO allies will have to "deal with it."

The US has been attempting to change Turkey's mind about buying Russian S-400 air defense systems ever since Ankara and Moscow signed the contract in December 2017. One of the key pretexts for Washington's demands was fear that Russia may use S-400s to obtain secret data on the fifth generation jet F-35, which Turkey plans to obtain under a contract signed with Lockheed Martin.

READ MORE: US to Introduce Sanctions Against Turkey if It Buys Russia's S-400 — State Dept.

Assistant Secretary of State for European and Eurasian Affairs Wess Mitchell said on June 26 that Ankara would face "consequences" in accordance with Countering America's Adversaries Through Sanctions Act (CAATSA) if it doesn't abandon S-400 deal with Moscow. He also reminded Turkey that the US may put a hold on F-35 shipments in response to the acquisition of S-400 systems by Ankara.

Turkey has repeatedly slammed the pressure being put on it by the US over the S-400 deal. Turkish Foreign Minister Mevlut Cavusoglu confirmed on June 25 that Turkey has no plans to abandon the deal with Moscow regarding the purchase S-400 air defense systems.

Turkish Ex-General: Ankara-Moscow S-400 Deal a 'Response to US' Threats'