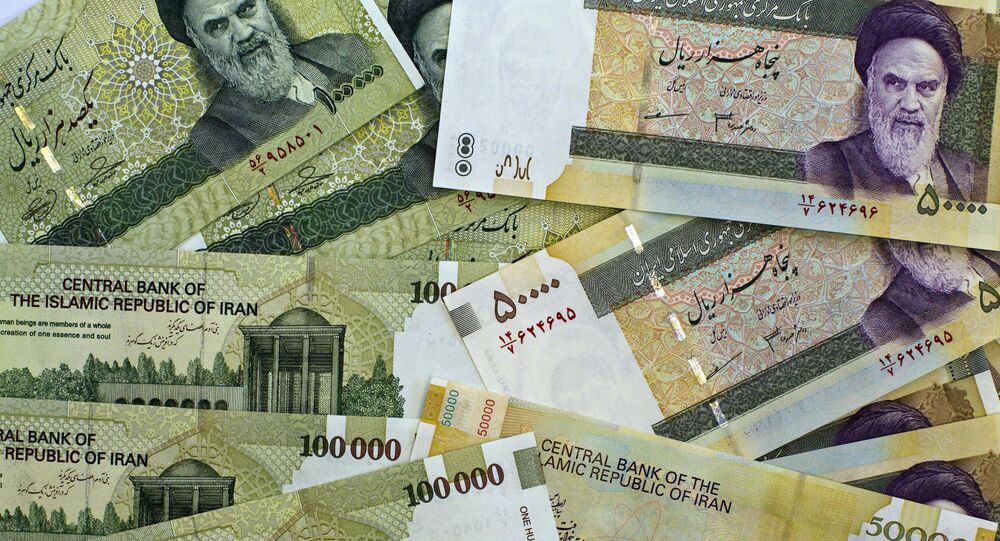 As US economic sanctions on Iran loom, Iran’s currency faces inflation, with the rial having lost half its value in recent months. However, the currency question is mostly psychological, an Iranian professor told Radio Sputnik Tuesday, because it opens new prospects for trade and the government can blame the inflation on the US.

Tensions between Iran and the US have been on the rise since May 8, when US President Donald Trump announced US withdrawal from the Iran nuclear deal and threatened the country with new economic sanctions that will take effect on November 4.

On Monday, hundreds of Iranians gathered in front of the the parliament in Tehran to protest the devaluation over the Iranian rial. During recent months, the rial has lost half of its value falling to about 85,000 rials per dollar. At the end of last year, the cost of a dollar was around $42,000 rials.

"It is crystal clear," Maysam Rezai, a store owner in Iran, told Middle East Eye earlier this week. "The rial has been devalued and dollar's price is surging dramatically. This hurts our business."

Mohammad Marandi, an expert on American studies and postcolonial literature at the University of Tehran, told Radio Sputnik's Loud & Clear Tuesday that the devaluation of the rial, which is more psychological at the moment because Iran has no shortage of wealth, could boost production by local industries.

"There is apprehension because the markets have been rattled and the rial has devalued quite significantly," Marandi told Loud & Clear hosts John Kirikou and Walter Smolarek.

"I'm sure that the Americans and the mainstream media are viewing every sign of dissent in Iran as a sign of revolution, and that is utterly misleading. I think it is overwhelmingly clear that Iranians are blaming the US government for [the devaluation]. It is creating a hostility toward the US government that I don't think I have seen since the initial years of revolution. There is also an extraordinarily large amount of hostility toward Trump," Marandi explained.

On Tuesday, a senior US State Department official said that it expects its international allies to reduce their Iranian oil imports to zero unless they want to face US sanctions.

"We view this as one of our top national security priorities," the official told reporters on a conference call Tuesday, Platts reported. "I would be hesitant to say, 'zero waivers ever,' (but) I think the predisposition would be no, we're not granting waivers."

The official also said that the US has engaged the United Kingdom, France and Germany on this issue and will continue to branch out to new partners in the coming weeks to brief them on the process of reinstating US sanctions against Iran.

"The devaluation of the rial is hurtful for Iranians. However, my personal opinion is that it was inevitable because oil-producing countries purposefully prop up their currency through the trade in oil. It distorts the economy and makes local production unsuitable, because wages go up while the relationship between the Iranian currency and foreign currencies remain the same, making locally produced goods more expensive," Marandi told Radio Sputnik.

"Over the last few years, we have seen an increasingly large number of factories and companies in Iran that produce goods going bankrupt. So, in my opinion, this devaluation is a good thing. If it didn't take place through Trump, it would have been much worse because people would have blamed the Iranian government. But now, the government has the luxury of blaming Trump for this devaluation. It creates a potential for local industries and production," Marandi added.

In fact, the devaluation of the rial is more "psychological" for Iran at this point, according to Marandi, because the country does not have a shortage of wealth thanks to its oil production.

"During the last decade, Iran has been accumulating a great deal of gold," Marandi noted.

The devaluation of the Iranian currency is also likely to intensify trade between China and Iran.

"The market in China is so large that many of Iran's needs are already being met by China. So, the US sanctions will intensify this relationship and trade between China and Iran will go up," Marandi explained.

The 2015 Joint Comprehensive Plan of Action (JCPOA), more commonly known as the Iran nuclear deal, is an international agreement on Iran's nuclear program established in July 2015 between Iran, the US and five other countries, including France.

The agreement was negotiated by former US President Barack Obama's administration as a way to ensure the peaceful nature of Iran's nuclear program. Under the agreement, Iran pledged to not seek, develop or acquire nuclear weapons in exchange for the lifting of sanctions imposed against the country.