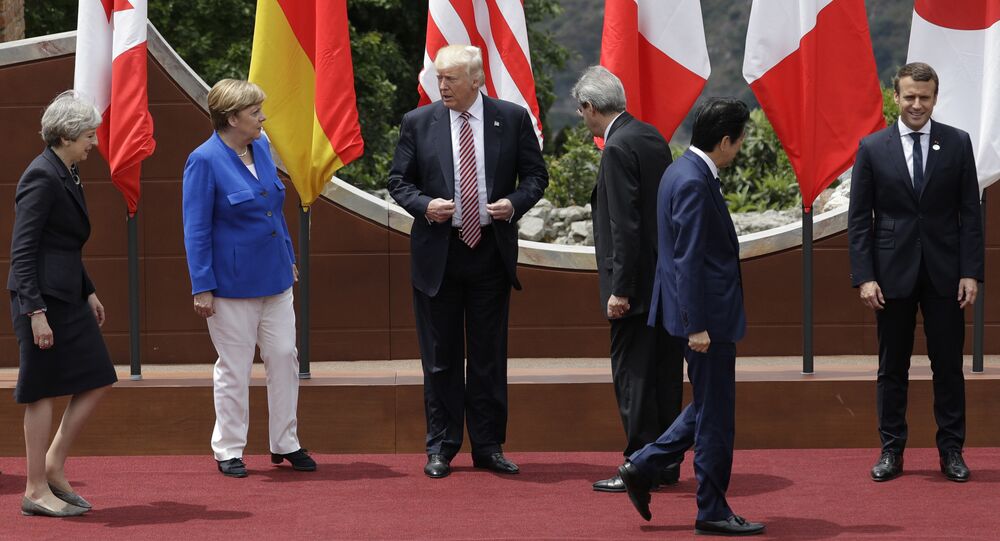 The concept of globalization is falling apart at the seams as Eurosceptic parties take the reins while US President Donald Trump pushes ahead with a protectionist tariff war, Italian academic and author Salvatore Santangelo told Sputnik, emphasizing the necessity of a Russian-European rapprochement.

Speaking to Sputnik Italy, Salvatore Santangelo, Italian journalist, author and professor at the University of Rome Tor Vergatapointed out that the so-called "populist" political movements are gaining ground in Europe due to the negative effects of globalization: "[The people] seek to protect themselves and support political forces operating at two levels, as does the Italian right-leftist government: On the one hand it struggles for the people's welfare and payments to all citizens, on the other hand it controls migrant flows."

Concept of Globalism Bursting at the Seams

© AP Photo / Jesco Denzel
EU-US Tariff War Will Affect Both Sides of the Atlantic – Professor
Meanwhile, the EU-US alliance is crumbling amid nothing short of a tariff war launched by US President Donald Trump in March 2018. After the US president's additional tariffs on aluminum and steel had come into force on June 1 the EU, Canada and some other countries announced retaliatory measures.

Commenting on the ongoing tariff spat, the journalist referred to the story of the Tower of Babel: the attempt to build a "homogenous" globalized world was doomed from the outset.

"The tower collapsed, the population dispersed, and a single language turned into many languages," Santangelo underscored. "A completely homogenized flat world is a utopia. This does not mean that the forces of globalization are weak. But they are counterbalanced by anti-globalization trends. As for the relationship between Europe and Russia, my position is very close to the stance of Ambassador [to the USSR between 1985 and 1989] Sergio Romano: It is important that we return to dialogue as soon as possible."

© AFP 2020 / IAN LANGSTON
Analyst Explains Why EU, Canada and NATO Teaming Up Against Trump
The author cited Trump's remark at the June G7 summit in Canada regarding Crimea: "On the margins of the last G7 summit Trump spoke about the Russian nature of the Crimea and the need to find an opportunity for a dialogue with Moscow," Santangelo highlighted. "We must together resist the challenges of globalization — terrorism, fundamentalism and instability."

The US president had reportedly noted that Crimea was part of Russia. Commenting on the alleged remark, the White House's press secretary, Sarah Huckabee Sanders, told journalists on June 14: "I know it had been reported but I'm not going to comment on a private conversation I wasn't a part of."

Earlier, the US president opined that the G7 needs Russia at the negotiating table: "You know, whether you like it or — and it may not be politically correct — but we have a world to run and the G7, which used to be the G8, they threw Russia out, they should let Russia come back in because we should have Russia at the negotiating table," Trump said, having arrived in Quebec.

'War as Paradigm of Globalization'

In his latest book "Babel: Dai Dazi di Trump alla guerra in Siria: ascesa e declino di un mondo globale" ("Babylon: From Trump's tariffs to the war in Syria: The rise and fall of a global world") Santangelo describes the negative effects of globalization and a global crisis. The central themes of the opus are China's rise, massive migration flows, armed conflicts, the US invasion of Afghanistan to Syria, and the internalization of markets and national identity.

© AP Photo / Hassan Ammar
Israeli Analyst Explains Why Iran Unlikely to Withdraw From Syria
"One of the chapters of my book is about war as a paradigm of globalization," the author pointed out. "The eleventh of September [2001] and the Iraq War [of 2003] were the key period. Ambassador Sergio Romano wrote a number of very important essays about the unipolar world and the expansion of US foreign policy and unipolar American globalism. In fact he wrote about the inability of the rest of the world to cope with this phenomenon."

Santangelo remarked that globalization is accompanied by the "unification of preferences," while the issue of uniqueness and originality is crucial both for the individual and the nation.

"The symbol of the victory of globalization at the end of the Cold War was the opening of a McDonald's in the center of Moscow," the journalist said. "Those who do not want to reconcile themselves with the 'equalization' choose organic products to which they are accustomed and which is more healthy than the food the snack chain is offering around the world."

The author underscored that the same is happening with Islam: The Arab world is feeling the threat of globalization and reacting to it; sometimes in the form of terrorism.

The views and opinions expressed by Salvatore Santangelo are those of the speaker and do not necessarily reflect those of Sputnik.