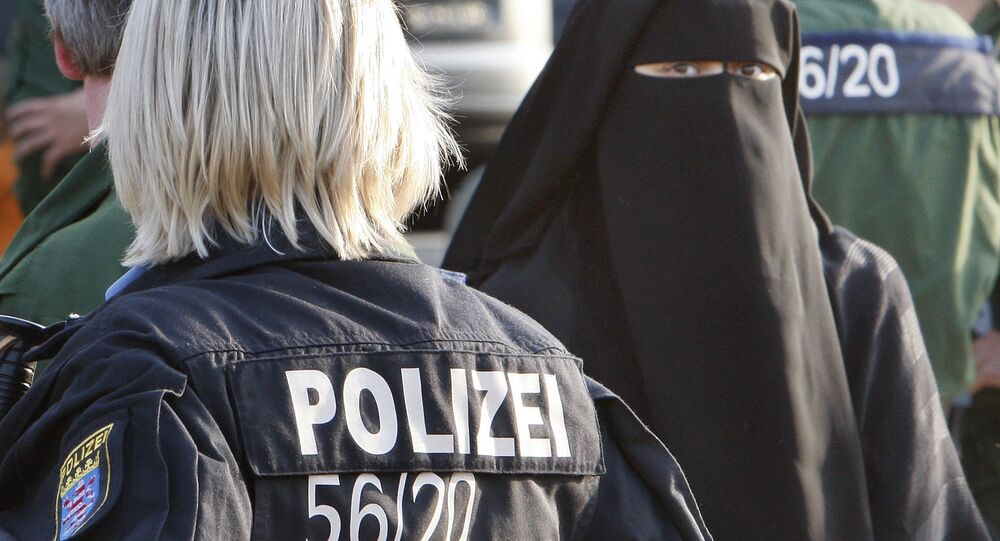 The Al-Mustafa Islamic center in Bremen, Germany collects donations to support Hezbollah in Lebanon the Jerusalem Post has reported on Friday citing a report by Bremen intelligence services. The media outlet also cited a 2017 intelligence report, which claimed that around 950 Hezbollah operatives raise funds in Germany and recruit new members.

Sputnik discussed the issue with Qanta A. Ahmed, a British-American Muslim physician and member of the Committee on Countering Contemporary Anti-Semitism through Testimony, Shoah Foundation, University of Southern California.

Sputnik: How surprising was this report to you, if at all?

© CC0
US, EU Taxpayers Provided $80 Mln to Support Islamic Terrorism – Think Tank
Qanta A. Ahmed: This story I don't really consider news, this is how Europe's Islamists operate, they operate in plain sight. Authorities in the West as well as in the Muslim majority world are aware that terrorism relies on two networks: the terror financial network and the mosque network. The fact that they've uncovered activities at a mosque in northern Germany that suggests financing is funneling back to Hezbollah in any capacity is unremarkable, it's very important that it was reported but this is not unusual.

We know when we look at the Muslim world General Musharraf when he was in power outlawed militants fundraising in Pakistan for various Islamist groups who used mosques.

We know the President Sisi in Egypt outlaws mosques that preach and engage in Muslim Brotherhood ideology, they use human intelligence to shut down preachers that support the Muslim Brotherhood ideology which is the mothership for all terrorism, that's from where Hezbollah has derived even though it's a Shia Islamist group, and it is just that the West has been somewhat slow to recognize that many of these mosques that are masqueraded as places of worship are important nerve centers for the oxygen of terrorism.

Colin Powell, the former US Secretary of State said "money is the oxygen of terrorism," without the means to raise and move money around the world these terrorists cannot function.

Sputnik: Last time you were on the show we were discussing the report that the Great Mosque in Brussels has been training Imams who preached hatred towards Jews, Jihad and the need to prosecute LGBT minorities and you stressed the need for a very frank conversation about Islam both in Europe and the United States, can you elaborate more on that?

Qanta A. Ahmed: Yes, it's excellent that you bring up this point, because the mosque in Bremen was associated with attendees going and observing the Al-Quds day that Ayatollah Khomeini launched, which was a day to ask, demand the fall of Israel which is a militant ideology and certainly, and I'm not able to speak and read German, I'm not familiar with the conversations happening in the German media about this, but very much so Islamism has to be separated from Islam, and that is the work of Muslims.

© REUTERS / Thilo Schmuelgen
Islamist Detained in Cologne Intended to Meet Daesh Militants in Syria - Report
It is very difficult for people outside of the state to really lead those discussions, and the key that this ideology is not related to Islam as Hezbollah has described as lethal, cosmic enmity against Jews and Judaism, everything representing Israel, Zionism in a way that they claim that it's Islam's religious belief and it's not, they are not only believing this but they're putting their money where their mouth is and raising money in order to fuel future wars.

Some years ago I was at a counterterrorism meeting in Israel where we talked about the prospect of the future Hezbollah-Israel war, shortly after the last one that was very brutal and lasted about 53 days, and we know that in the southern part of Lebanon Hezbollah has really corralled private homes of ordinary Lebanese citizens that are very poor, some of them have homes that are built with three stories, and they tell the family: We'll give you this home, you have the first floor and you have the second floor and the third floor is ours. And the third floor is used for the storage of missiles, armaments and weapons.

So it's not as if it's one isolated area where armaments exist, it's scattered through a civilian residential area. So the next war, if there is one between Israel and Hezbollah, will be door-to-door and house-to-house, it will be very terrible. This is how Islamist groups exploit their native and their captive population.

We have to emphasize that the German Muslims that are going to the mosque in Bremen, many of them may be completely innocent, they may be believing; we've just had the holy month of Ramadan where we are required to give to charities. They may feel they're helping refugees or maybe helping poor countrymen in their countries of origin.

© REUTERS / canpix Denmark/Liselotte Sabroe
EU, Russia Need Joint Security System to Keep 'Islamic Extremism at Bay' - AfD
They don't realize how this money can be funneled and travel backward, but also we have a little understanding of how sophisticated these groups are. Groups like Hezbollah are just as sophisticated as ETA was or FARC was, they have some of the largest sources of money that are coming from a location in Paraguay to the tune of multiple millions of dollars, they have global networks of financing.

It's really a predatory alternative economy that Islamist terrorism has developed into. So first we start by differentiating between Islamism and Islam, and by doing this as Muslims, we empower our governments, whether they are German or whether they're Russian or whether they are American, to really go after these criminal gangs that are fueling lethal terrorism.