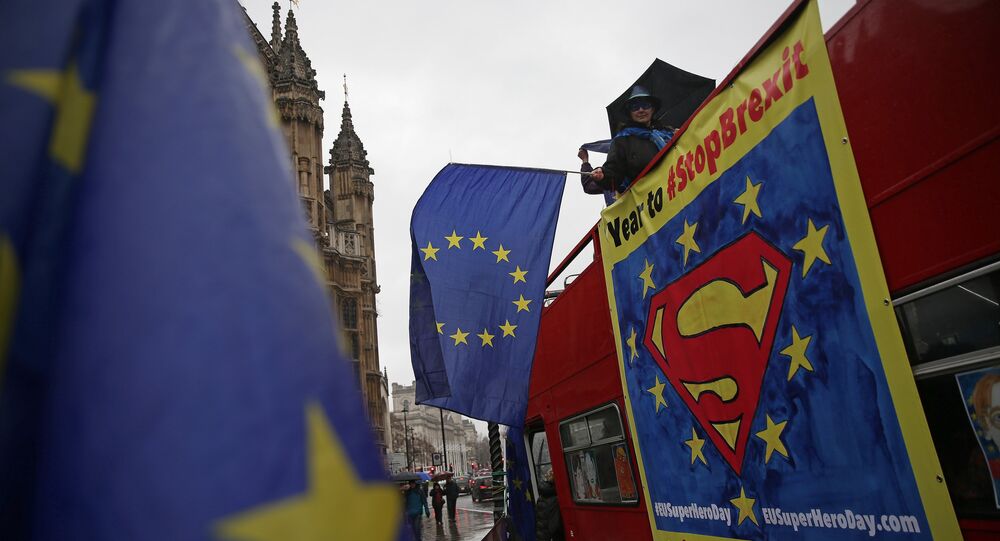 Prof on Brexit Division: 'Economic Catastrophe' vs 'Mlns of Muslims on the Door'

The UK is ready to walk away from Brexit negotiations without a deal, a senior UK Cabinet Minister announced on the second anniversary of the Brexit vote. This comes as tens of thousands pro-EU supporters marched through central London on Saturday calling for a new referendum on the terms of a Brexit deal.

Sputnik discussed this with Steven Fielding, a Professor of Political History and Director of the Centre for British Politics at Nottingham University.

Sputnik: Two years after the Brexit referendum, how different is the current sentiment in the UK about Brexit compared to 2016?

Steven Fielding: The British public is split, increasingly, as negotiations don’t appear to be going in any particular direction and all kinds of problems are being raised in particular with the Northern Ireland border and also the prospect of no deal at all — that could be disastrous for the British economy. So greater and greater concerns are being felt by the people in Britain. In the last poll that I saw is in support of the people who are demonstrating in London, there is a majority, a slight majority of people who are in favor of a second referendum to ratify the deal; hopefully there will be one, sometime next year.

READ MORE: 'Leave' Supporters Rallying in London, Blaming May for Uncertainty Over Brexit

Sputnik: This is actually a demonstration not for a second referendum on whether or not to leave the European Union but whether or not people should have a right to vote on the final deal, now how would that affect the Brexit process?

© AP Photo / Michael Kappeler
'This Means End of Europe': Merkel's Union Partner Accused of 'German Brexit' Plot
Steven Fielding: The reason why there is this demonstration and the reason why the people that are organizing it are saying that they want to try to mobilize public opinion, for those who want to have that kind of a referendum there is no political mechanism within Westminster to actually introduce a second referendum to ratify it because the Conservative party leadership is against having that and the Labour party leadership is against having that, both the leaders of the two main parties that effectively control how the votes are going to go are effectively against that mechanism, so I don’t really see this demonstration really going anywhere unless it starts a process where a big majority of the public are starting to demand a referendum to ratify the deal, and I don’t know whether that would happen. There a smaller demonstrations being organized in London as well to oppose that, so we've got a very divided population.

Sputnik: Even if something were to happen miraculous and they were to get this to go through, there's enough difficulty between the two major parties and even within Theresa May's party there’s a lot of dissent regarding how to handle Brexit. How can you also have the added responsibility of putting this pass the people and then wouldn't this make it harder to get a Brexit deal?

Steven Fielding: It would, but it’s not going to happen. However divided the Conservative government is over at the negotiations even if its sternest critics within the Conservative party back off when push comes to shove and the Labour party is also divided on the issue. The majority of  Labour members actually probably do back having a second referendum but their leader does not, so I don’t see a mechanism of another referendum actually happening. What that is, is kind of an expression of discontent, of fear of what will happen when negotiations conclude; what kind of a deal this government will have managed to get if it manages to get one and the lack of faith in the leaderships of both parties.

Sputnik: There’s been a lot of criticism that the whole referendum was not really thought out. First of all, that it was able to have a victory with such a small percentage; perhaps, some were saying that we should’ve had at least 60/40 or two thirds to or something like that to make such a significant change in the way things have been going for the past 40 years…

Steven Fielding: Yes, this was this was a device that was meant to unify the Conservative party introduced by one of the most disastrous Conservative leaders, David Cameron, who thought he could win the vote and by holding the vote he would unify his party and would stop people going on about Europe all the time, and, of course, he didn’t really think it through it all. I don’t know any serious country to have a major referendum that doesn’t say right from the start that the majority votes that have to decide on this matter, and the majority of people who could’ve voted did not vote, the 52% that voted were the 52% that voted, that wasn't 52% of the British public, a minority of the British public voted to leave, and you’re absolutely right, nobody knew what does that really mean when you leave EU, what does that mean, nobody really spelt it out, and there was so many fears on both sides that there wasn’t a serious debate.

© AP Photo / Adam Hunger
'Not a Major Challenge': US Ambassador Tells UK to Take Inspiration From Trump on Brexit
It was going to be an economic catastrophe from day one if we left and if we stayed there would be millions of Muslims from Turkey who would be on the door the day after, so it was a ridiculous, childish debate and the British people went with their guts and voted on an issue that is an important one within the EU, about immigration, but largely that didn’t vote about economics and all the other advantages the EU can bring, and one of the irony's of the referendum was that people that voted to leave were actually beneficiaries, living in parts of the country that were beneficiaries of EU investment and EU policies and maybe harmed by leaving. This is the basis for people saying we need to have a referendum on the deal because when we voted to leave we didn’t know what we were leaving, it was like the metaphor of saying we want to buy a house but we don’t know what the house is, and it’s only after you’ve left the old house you knew what the new house is going to be like.