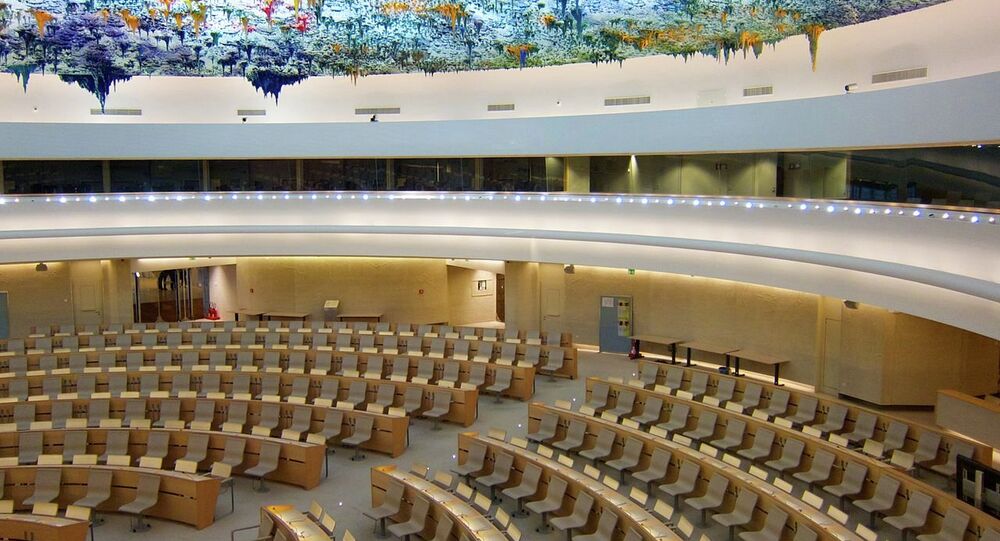 US decision to withdraw from the United Nations Human Rights Council is a considerable blow to the country's reputation. That's according to Russia's Foreign Ministry.

Spokeswoman Maria Zakharova said in a statement that the US demonstrated a deep disregard for the UN and the structures that are part of it, as well as double standards by trying to ram its position through. The withdrawal came on Wednesday after more than a year of tough rhetoric against the 47-nation body, its alleged bias against Israel and the inclusion of human rights abusers.

Sputnik discussed Israel’s reaction to the US decision to withdraw from the UN’s Human Rights Council with Rotem Nimkovsky, a specialist on law for legal practitioners at Bar-Ilan University.

© REUTERS / Denis Balibouse
In Trump's Footsteps: Danish Right-Wingers Call to Leave UN Human Rights Council Over 'Israel Bashing'
Sputnik: Do you think that this decision will ultimately limit the US ability to influence international affairs despite the claims that it was done to support Israel? Because the US has for many years positioned itself as an influencer in international affairs on human rights; they’ve often been very outspoken and supposedly have tried to uphold them. What can you say about that ability and the role of the United States in the international community?

Rotem Nimkovsky: I don’t think that there will be much change with US influence. The problem is the Human Rights Council; despite its name, it’s not completely a relevant institution in actuality.

While insulting Israel for violating human rights, sometimes fictive, sometimes right on the border of being legal, it completely ignores real human rights violations which are occurring in countries all around Israel, like Syria and Iraq and Libya. This is a question of the legitimacy of this council.

Sputnik: Many would point to the fact that the US is an ally and provides weapons to Saudi Arabia, for instance. At the same time, the US considers Saudi Arabia a country that does not have the best record with human rights. Isn’t there a lot of hypocrisy?

Rotem Nimkovsky: There’s a lot of hypocrisy with human rights.

It has bigger critics against selling weapons; even Israel is selling weapons to Turkey, which are being used against the Kurdish forces, the Peshmerga and the YPG – which are the only people really fighting ISIS[Daesh] in Syria and Iraq. But there’s little critique about the Israeli government in regard to that. But weapons sales is something which is growing all over the world, it’s more about economy rather than political incentives.

© AFP 2020 / RICHARD JUILLIART
US Can Only 'Gain Credibility by Leaving' UN OHCHR - Analysts
Sputnik: It’s economy up until the moment when those weapons are used to violate somebody’s human rights.

Rotem Nimkovsky: The US allows people to buy weapons without any tracking. This is really specific, but people are getting shot suddenly by some upset student which has failed or is very angry at his friends. So I can say there’s a little bit of hypocrisy, but the human rights violation isn’t caused only by selling weapons and ammo to other countries.

I’ll give you an example: during the attacks in France at Charlie Hebdo a couple of years ago, there was another attack in Nigeria by the Islamic terror organization Boko Haram. They slaughtered 2,500 people and just left them in the roads and this got very little report in the international media.

Nobody really knows about this because people’s attention was on France and freedom of speech. There’s also a question that maybe France is a sort of a “class A” country and Nigeria may be “class B.” I don’t know how to treat it otherwise. Now we have to look at this HRC, who’re the members of this council? These are the countries in which human rights are being violated constantly in the most radical way; I’m talking about Libya and China and Venezuela, Afghanistan…

© REUTERS / Toya Sarno Jordan
'Cesspool of Political Bias': US Exits United Nations Human Rights Council (VIDEO)
Sputnik: If you look at Human Rights Watch and if you take a look at the record of the US, you’ll also see a lot of problems and of course this is coming right at the same time when the US is being extremely criticized for separating children from their families on the borders and placing those children in camps in the desert where the temperatures reach 40° C in tent villages.

Rotem Nimkovsky: For sure this is a very sad case, but these refugee camps or illegal migrant camps are all over the world. What are you supposed to do with illegal migrants, how can you afford them?

What do you do it if these migrants bring criminal violations or even human rights violations? We see very well what’s happening now in Europe that with the refugees from Syria came also activists of ISIS[Daesh] and Al-Nusra, convincing people to join their forces and their agenda.

Sputnik: The US under Donald Trump has pulled out of a lot of international agreements and organizations. There’s been talk for so many years that the US could actually pull out of the UN.

What can you say about what’s going to happen with these organizations, with the UN, with branches of the UN like the UN HRC? The United States has said “we’re pulling out and we’re going to look for different ways to advance human rights.” What are the different ways that are left?

Rotem Nimkovsky: The HRC doesn’t do its job, it’s only about faulting the Israelis.

It’s become a tool for illegal warfare based on lies which contradicts completely the UN law itself.

The views expressed in this article are those of Rotem Nimkovsky and do not necessarily reflect those of Sputnik.

"You Failed to Bow to Our Dictates!" US Leaves UN Human Rights Council

US Can Only 'Gain Credibility by Leaving' UN OHCHR - Analysts