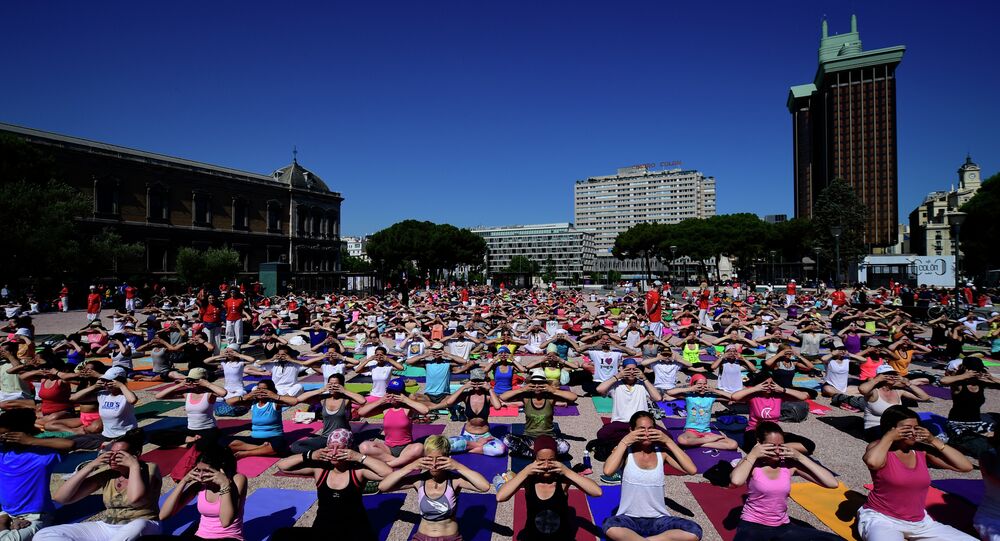 Yoga – a mix of physical, mental and spiritual regimens that originated in ancient India – has become one of the most popular fitness fads in the world. On this year's International Day of Yoga (June 21), Sputnik spoke to Nivedita Joshi, who wrote the first book on Yoga for the visually impaired.

New Delhi (Sputnik) – Nivedita Joshi, a survivor who was healed from a slipped disc, cervical spondylitis and early stage scoliosis with the practice of Yoga with her mentor Yogacharya B.K.S. Iyengar, runs the world famous Iyengar Yoga Centre, popular with the expats as well as the common man in India's New Delhi. A renowned figure in India's national capital, she has dedicated her life to propagate the message of Yoga. On the occasion of International Yoga Day, Nivedita Joshi shared her knowledge and experience of the art, science and philosophy of Yoga with Sputnik.

Sputnik: What is Yoga all about? Tell us more about it and how does it influence one's well-being?

© Photo : juliaalias
Two Siberian Girls Practice Yoga in -40 Degree Weather and Frost (PHOTOS)
Nivedita Joshi: It is so profound that if someone is practicing Yoga in a real sense then you are bound to have peace within yourself, the society and then in the country. Yoga teaches you to share and care. Yoga is incomplete without its eight limbs. Unfortunately, people think Yoga is only asana (posture) and pranayama (regulated breathing). However, the eight limbs of Yoga are Yama (restraints, moral disciplines or moral vows), Niyama (positive duties or observances), Asana (posture), Pranayama (breathing techniques), Pratyahar (sense withdrawal), Dhyan (meditation), Dharana (focused concentration) and Samadhi (bliss or enlightenment).

Each of the limbs is deep in its understanding and purpose. It influences and affects every aspect of our lives and beyond. For example, Yama stands for Satya (truth), Ahimsa (non-violence), Astey (non-stealing), Brahmacharya (continence), Aparigraha (non-coverting). Similarly, Niyama is for Swacch (purity), Santosh (contentment), Tapas (ardor or austerities), Svadhyaya (the study of self) and Isvara Pranidhan (dedication to the Lord).

Sputnik: You lead one of the most popular Yoga centers in Delhi, which is taking ahead the teachings of your Guru and world-renowned Yogacharya B.K.S. Iyengar, tell us more about your work.

© REUTERS / Arnd Wiegmann
Enlightenment: Indian Delegation to Offer Yoga on Icy Slopes During Davos Summit
Nivedita Joshi: I was fortunate to meet Yogacharya B.K.S. Iyengar, who was the disciple of Shri T. Krishnamacharya, who was the principal mentor of the then king of Mysore. Now, his daughter Dr. Geeta S. Iyengar, his son Prashant S. Iyengar and his granddaughter Abhijata are teaching and practicing Iyengar Yoga at Pune center. I run his biggest chapter of Delhi Iyengar Yoga Centre.

Sputnik: You were in the news a couple of years ago for having pioneered the teaching of Yoga for the blind. Please tell us more about it.

Nivedita Joshi: Since the last 3 years, I am using Guruji B.K.S. Iyengar's teachings and his methodology to teach Yoga to visually impaired people and have written the first book of Yoga in Braille. This book was released internationally during the first International Yoga Day celebrations at the UNESCO headquarters in Paris, by the director-general of UNESCO. This year, the Government of India felicitated me as the first person to write about Yoga in Braille.

Sputnik: How has your experience been in working with expats in India?

Nivedita Joshi: The experience with foreign students is great as they are keen learners and devote time to learn as they are trying to understand the divine subject Yoga, which is the best gift from India to the universe.

Sputnik: You also traveled to Russia with your mentor in the year 2009. How was the experience?

Nivedita Joshi: The trip with Guruji to Russia was great as I found Russians have minds like people of the West and hearts like those of Indians. If I'll get a chance to teach in Russia, I'll be very happy to share my knowledge with them.

Awww…What a Cuteness! These Sleeping Furry Ones Will Teach You Yoga