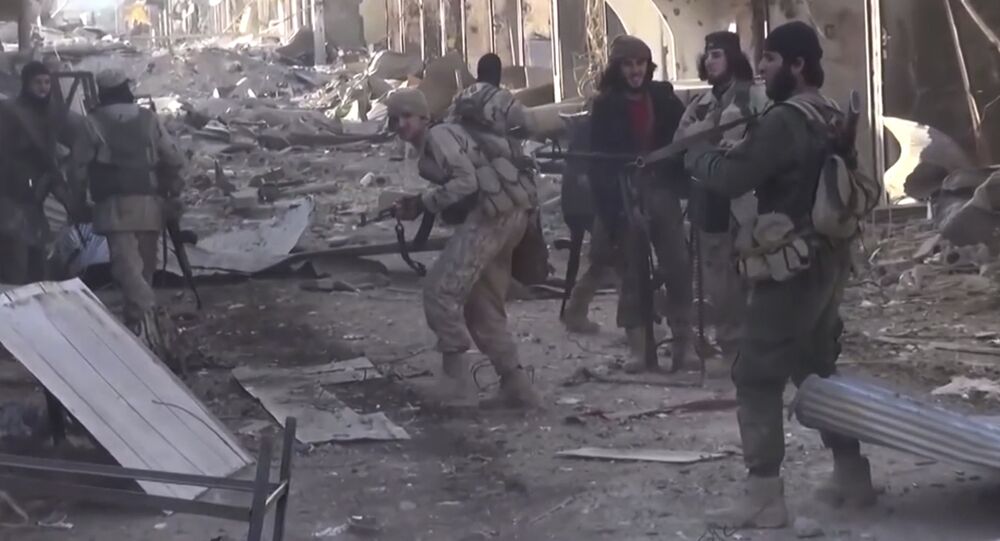 Radio Sputnik discussed the issue of the French and German nationals, who fought for Daesh in Syria and now may potentially re-enter Europe, with Dr. Stig Hansen, Professor in International Relations with the University of Life Science in Oslo, Norway.

Stig Hansen: It's hard to say but it is quite a possibility; you know you have to take local tactical considerations and they might have seen this as the right way to do things in order to gain some tactical advantages locally. Of course they are thinking about their own survival, and traps like that do happen in the battlefield.

Sputnik: Can you tell us what is being said about these alleged exchanges and how extensive are they?

Stig Hansen: It's very hard to say and it's also hard to say how dangerous they would be for Europe. There's a growing worry in Europe about returning fighters also because some of the security services in Europe are rather strained. The potential terrorists are there in such large numbers so they have problems with following these individuals and surveilling them in a good way. But then again, it's hard to say how dangerous such returning fighters are.

© CC BY-SA 3.0 / haitham alfalah / AL-Hasakah Syria
SDF Wipes Out Major Daesh Stronghold in Syria's Northeast – Reports
A couple of years ago, there was a research project going on in Norway and there was an article published where they said that 1 out of 10 or 1 out of 9 fighters returning to their home countries will be involved in some type of terrorism. But it has been contested and other researchers would say "Okay, there are few becoming involved in terrorism, but also they could do actually do very serious things, so it might be a problem and if you have a lot of people returning, 1 out of 9 is actually a large number.

Sputnik: I can imagine that there're a lot of conversations about how to do appropriate vetting and screening. What has been suggested to understand, to evaluate the returnees as far as whether or not they pose a threat?

Stig Hansen: There's a lot of confusion in Europe over that. The legislation is varying; in some countries like the country I'm based, Norway; laws have been tightened, so even membership in the Islamic state is an offence and you can be put in prison if they can trace that you're actually a member; so you can be put in prison. But then, of course, you need some kind of strategy given that you put some of these people in prison because, as we've seen before, prisons can be used to radicalize; it can be a stage if those people aren't handled properly, you're just transferring the problem.

And others don't have that legislation and you have big paradoxes like the jihadi wives. What do we do with the jihadi wives; it's still open for discussion. They didn't go to the battlefield, but some of them provided logistical services that were important for the Islamic State [Daesh]. And legally this hasn't been truly settled inside the European Union. So it's a lot of approaches and it's quite confused for the time being.

Sputnik: What do you do with these people? You can't keep them in prison forever. Is there any kind of plan as to debriefing?

Stig Hansen: There're standardized models. The most famous model is perhaps taken from Denmark; it's the Aarhus model, with focus on de-radicalization, on action rather than ideology, so each way could get people less violent. And these models have been used on right-wing terrorists before and even on some left-wing terrorists. Increasingly they are used on jihadists as well. So these models have been tried and I think they have to be systematized and put into gear.

© AFP 2021 / DELIL SOULEIMAN
Western-Backed Syrian Rebels Release Daesh Jihadis From Europe in Secret Swap Deal - Report
The problem now for many countries is that we haven't been properly prepared for what to say; basically prison radicalization, so we need to think more carefully about that. We need also to think carefully about the balance between the radicalization programs and punishment, because some of these people have committed large atrocities; according to law, they should be punished.

Stig Hansen: It's hard. Atrocities in a country that doesn't function properly and with porous borders, so some of these people might have committed atrocities inside Iraq as well atrocities committed in a situation where a lot of other parties committed atrocities. There's a lot of bias there. It's rather hard, but one way of doing things is to make it criminal, a criminal offence just to participate in the Islamic State and we're seeing several countries going in that direction.

That's one way of handling it, but as the evidence becomes less advanced, you don't need to tie them directly to the atrocities. But some have committed atrocities, so the sacrifice you actually do when you criminalize Islamic State membership is that maybe you will move the focus away from some of the largest atrocities that are hard to trace in the battlefield.

© Sputnik
Daesh Training Camp for Children Uncovered in Syria (PHOTO, VIDEO)
But I think there're a lot of problems there and I think the Syrian authorities, it's a long way to go before they have really investigative capacities and perhaps even strategic interest in looking into this matter. So it's a big problem and it's hard to solve, but there're some issues that you can do, like criminalizing membership in the Islamic State.

Sputnik: Some Western countries have also refused to take responsibilities for their nationals being held in captivity. What are the reasons behind that?

Stig Hansen: It's a big moral discussion actually. A lot of serious politicians in the West look at people being held in captivity that have been Islamic State members as forms of traitors, to a certain extent that they yielded their loyalty by ending their loyalty towards their state in the West, they also yielded their right to citizenship rights.

On the other hand, inside Western Europe, they are afraid the numbers of the radicalized; if it goes above a certain threshold the police will be inefficient and lack capacity to surveil them, so that's also one of the considerations when they return.

*Daesh, also known as IS, ISIL, ISIS, is a terrorist group banned in Russia and many other countries.

The views expressed in this article are solely those of Stig Hansen and do not necessarily reflect those of Sputnik.