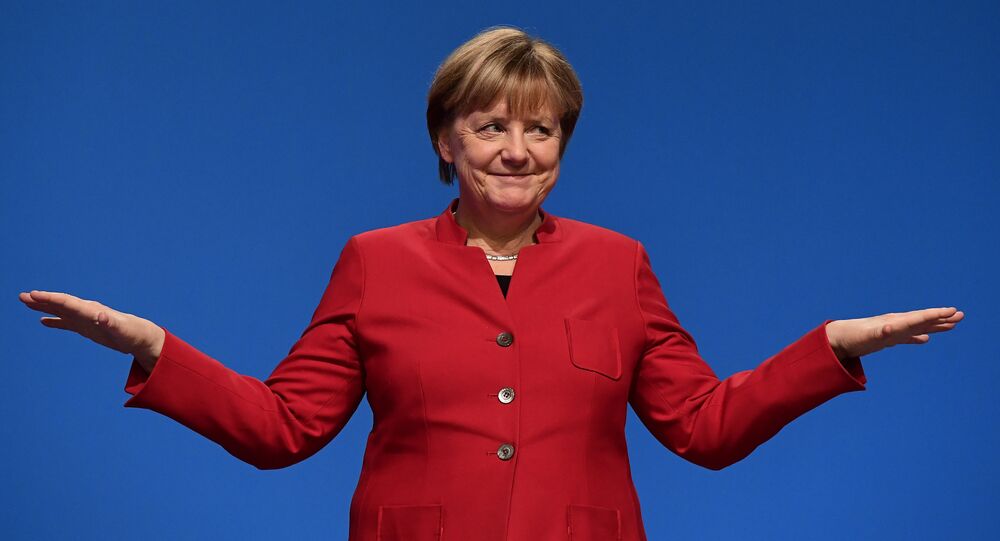 Merkel Non-Confrontational Because She Knows Coalition May Fall Apart - Analyst

Sputnik: If this ultimatum is not fulfilled what consequences will that have for Angela Merkel and can you comment a bit on her actual position right now in terms of government and support? What should she really do to preserve her position?

Philip Anderson: As we all know she's always a person who claims to negotiate or to maintain a dialogue right into the early hours of the morning in any kind of situation. And that's the attitude she's taking here not to be confrontational because she knows that on the one hand the CSU is electorally under pressure and the CSU, also to some extent, is behaving irrationally but she knows that the price could be if her coalition falls apart then that'll be catastrophic for the German government.

It would have repercussions, reverberations across Europe. And so she's prepared to compromise to some extent, some would say, facing a dictate on the part of the CSU politicians that she's got to get some kind of agreement from Europe.

The interesting point is to what extent is this part of the rhetorical de-escalation now. At the moment in order to maintain face, to save face, the CSU is saying she's got to find some kind of agreement. Because over the course of the next two weeks ideally there should be some kind of de-escalations so that even if she didn't manage to attain a radical change, which is very unlikely, a radical change in policy they'd be able to say she's done her best let's come to some kind of agreement on this.

© REUTERS / Hannibal Hanschke
Germany's Merkel Pledges to Support Italy on Migration Issue Amid Pressure
What we can definitely say is that CSU behind-the-scenes must be under enormous pressure from all of the CDU sister parties and their associations in the other 15 German states. And there is one point of pressure, potential massive pressure, which the CDU can subject the party here in the South too.

That is to say if the CSU really aims to, went for the break, if they said ok we don't care we're prepared to allow the coalition to go under, then what the CDU can say is okay in the case of the next election we as an independent party, the CDU will also stand for election and take some of your votes. That's the ultimate threat that was tried once 40-50 years ago and there was a huge conflict between the so-called sister parties.

And if it came to the crunch that's what Angela Merkel's party could say this time, okay you insist on following your line but there's going to be the break up then when you have your election in October then we shall have an independent party as candidates for a non-conservative alternative and that would be really frightening for the CSU.

So I think they would retreat from the brink if that came to that sort of break.

Philip Anderson: Yes, there is a threat, there's a real danger. Everything you read in the media, in the German media and the international media indicates that in a way the CSU are behaving like fire-raisers. They're standing in the lobby of the building and they've got torches in their hands and saying shall we or shan't we and of course that's extraordinarily dangerous. Things could get out of control.

Sputnik: And what would be the consequences if it did fall apart?

Philip Anderson: That would be quite wide-ranging. To some extent from the present point of view, we'd have to say incalculable. It would almost certainly lead to Angela Merkel having to resign; not being able to continue as chancellor and if that were the case then there would be new elections and the biggest danger of this is that the kind of the policy, populist policy which the CSU has been pushing actually promotes the interests of the party to their right, Alternative for Germany. Because the main thing that Alternative for Germany has been pushing in terms of personnel policy-making they have been saying Merkel must go.

© AP Photo / Michael Sohn
Paris and Berlin Urge Debate on EU Security Council Creation – Joint Declaration, Solution of Migration Issue
So if the CSU is actually the party which ultimately would secure Merkel's downfall then I think there's going to be new elections then the parties of the right and the Alternative for Germany would be able to say what we've always called for has come about give us your votes we'll push for an alternative.

And if that degree of destabilization took place within the German body politic even stronger right-wing party within parliament and no single figure within the CDU that they could really unite around and extremely divisive culture of bitterness between the main parties the main conservative parties at least then what would happen in terms of new coalition building and how would that affect Europe?

The main stabilizing factor in many ways in terms of rising populism economic insecurity, people's fears, etc. has been Germany and it's been under Merkel. What would happen if that was suddenly gone and torpedoed by her own side? Psychologically and in terms of voters' behavior, I'd say the consequence would be incalculable.

The views expressed in this article are solely those of Philip Anderson and do not necessarily reflect those of Sputnik.