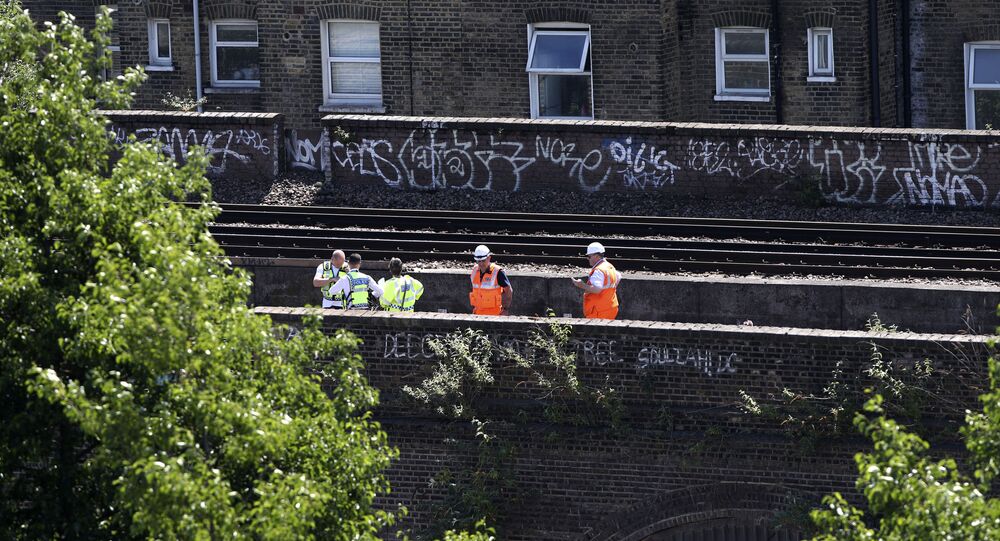 Three graffiti artists who were killed by a train in south London have been named by police. Sputnik spoke to a man whose son knew one of the victims and he said he was shocked by the "callous" reaction on social media.

British Transport Police says it is investigating the exact circumstances surrounding the deaths of the three men at Loughborough Junction, near Brixton, on Monday, June 18.

Two of the men were named on Tuesday, June 19, as Harrison Scott-Hood, 23, and  Alberto Fresneda Carrasco, 19, who was born in New York but was a Spanish national.

"His absence has left a deep hole in the family," said a spokesman for his family.

“We are completely heartbroken by the loss of our only son, Harrison. He was the love of our life…"

The mum and dad of 23-year-old Harrison Scott-Hood pay tribute after his death near Loughborough Junction yesterday https://t.co/SwaFYFwE93 pic.twitter.com/VnenXePhZh

Mr. Scott-Hood's parents Susie and Perry said their son was "loved by everyone" and had just returned from travelling in Vietnam and Cambodia.

"He was an intelligent and wonderful boy who had so many friends….he was a beautiful artist….Harrison completed us. He is irreplaceable," they said in a statement.

The third victim has not been named by police but the trio were known by their "tags" — Kbag, Lover and Trip.

Jim Jordan, who knew Harrison, said he had not been a hooligan but was a "gentle lad" from north London who saw himself as a "revolutionary artist".

He said he was shocked by some people's reactions on social media.

"It's shocking how people can be so callous. They know nothing of these boys, but assume their intentions were simply to deface and destroy and that's not the case at all. That is the way social media — especially Twitter — works though. Most of my experience of Twitter is very positive, but the idiots making these comments jump on these kind of incidents to mouth off their prejudiced narrow ideas without any care for the victims. I even had one guy direct tweet me to say these people don't deserve sympathy — for all he knew I could have been cradling my weeping son, it's monstrous," Mr. Jordan told Sputnik.

Sorry but if these people who were killed at Loughborough Junction turn out to be graffiti artists then I'm afraid they had it coming. All very sad but for the sake of spraying some shite on a wall they died, If anything good comes of this I hope it's that it acts as a deterrent

​Spray cans were found near the bodies after police and ambulance crews were called to the scene.

"When graffiti artists do get on to the tracks, there is massive risk," Superintendent Matt Allingham told reporters.

"His absence has left a deep hole in the family."

​Mr. Jordan said more needed to be done to encourage graffiti artists to get involved in street art.

​"There is a responsibility on the rail companies to make railway lines safer, but the 'revolutionaries' will always try at least to break in. I'd like to see the transport companies fund graffiti artists into safer ways. The danger aspect is I suppose part of the attraction — these kids don't want the safe route," Mr. Jordan told Sputnik.

#LoughboroughJunction These people were vandals so nobody should have any sympathy for them — not nice for the poor train driver though.

​Train Taken Out of Service After Graffiti Attack

Earlier this month a brand new £17 million (US$22 million) train owned by Govia Thameslink Railway was taken out of service after seven out of 12 of its carriages were sprayed with graffiti at sidings in West Sussex.

It was towed to sidings in Bedford, where it was completely cleaned and repainted.

For those of you on Twitter who think just punishment for trespass and graffiti on the railways is to be hit and killed by a train — it isn't. #LoughboroughJunction

​Helen Patterson, who filmed the damaged train, said it had been "trashed" by "thugs".

"The perpetrators must have brought a ladder to reach the top of the carriages' side panels, and probably had an air compressor and spray gun, rather than aerosol cans, to cover such a large area in the time," said a GTR spokesman.

"Worst of all, by trespassing on the railway the vandals put their own lives at great risk," he added presciently.

The comments on twitter about the bodies found at #LoughboroughJunction sicken me. Being hit by a train is an awful way to die and no one deserves that. Having seen bodies that have been hit by a train I can honestly say its horrific & life changing.

After ‘F*** Nazi’ Graffiti and Criticism,German Charity re-Opens for Foreigners