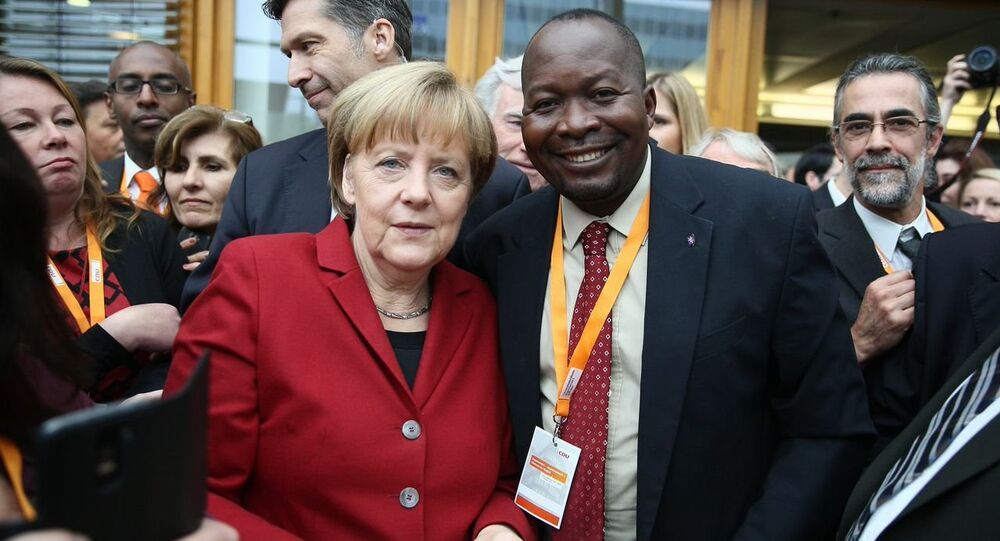 Black CDU Politician on Dark Side of Germany: 'Society Like Another Universe'

Cameroon-born politician and author Robert Atangana has written an account on the unprecedented demographic challenges facing Germany and its division "between partisans of globalization or multi-culti and ethno-centrists."

The book, titled "Without Plastic Surgery," features an "unapologetic, uncensored, unfiltered" autobiographical account of the hidden racism and other problems Atangana faced after arriving in Germany as a student from Cameroon, and what motivated him to establish a cultural connection between his native Africa and his newfound homeland.

Speaking to Sputnik Deutschland, the CDU politician said that the events rocking Germany today on the subject of immigration motivated him to write his book.

"Politicians and the media talk a lot about migration, integration and assimilation. They constantly discuss things in terms of figures and quotas. But there are not enough opinions out there of the people whom all this directly concerns. I've decided to reflect on paper the lives of the people hiding behind the figures," Atangana explained.

© REUTERS / Markus Schreiber
Germany's Merkel Accepts 2-Week Ultimatum From CSU Amid Migrant Row - Reports
Interested in art and visual communication from a young age, Atangana came to Germany in 2001 with the help of the Goethe-Institut, a non-profit cultural association that operates around the world and promotes international cultural exchanges. Quickly learning German and interested in politics, the young man joined the student wing of the Christian Democratic Union Party at the Kassel School of Art.

"I had a lot of friends at university," the author recalled. However, over time, he admitted, he began to be gain an awareness of Germany's hidden problems, including racism. "This was the dark side of things," he said.

"Society was like another universe," Atangana explained. "University is more 'internationalized' than German society. At university you communicate with teachers and students from around the world. But in society, you find yourself in a space where families have lived together with one another for generations, and sometimes have trouble accepting outsiders."'

Elected in Kassel as a "builder of bridges between cultures," Atangana became deputy chairman of the CDU in the Kassel district of Kirchditmold and, in 2010, became a member of the CDU federal conference of mandate holders with an immigrant background. There, he said, he was able to come to an understanding of the kinds of problems faced generally by immigrants.

© Photo : Robert Atangana
The cover and back of the Without Plastic Surgery, Atangana's account of his experiences in Germany.

Atangana himself ran into problems, including legal problems which left him "disenchanted" with the legal system, which he says is not truly neutral to foreigners. "As an immigrant, it seemed to me that justice and neutrality did not play any role for the court." In the end, Atangana appealed to the courts to "consider us, migrants, as human beings," and even wrote a letter to the German president.

© AFP 2020 / Christof Stache
About 78,000 People Apply for German Asylum in First 5 Months of 2018 - Reports
In 2015, Atangana returned to Africa, engaging in the implementation of various social projects in Namibia and Botswana. Some of these projects were funded by the German Federal Foreign Office. In Botswana, Atangana founded a German cultural center and helped to open the only German-language library in the country.

In Windhoek, Namibia, the official has helped organize the Days of African Children's Cinema, organized with the help of city authorities, the Goethe Institut and several partners from Kassel.

Atangana says he intends to put more focus on his work as an author and is searching for a German publisher. His book "Without Plastic Surgery" has been published in South Africa, but a German-language version is still in progress.