According to The Daily Mail, World Cup fans had been issued a warning that the Russian mafia could be readying prostitutes to blackmail fans by threatening to send revealing pictures to their wives. Mark Perryman, writer, research fellow in sport and leisure culture at the University of Brighton gave his take on this.

Mark Perryman: I don’t think it has anything to do with England and Russia. If you look at the previous tournaments, I think like in South Africa 2010, in Brazil 2014 in particular, we had exactly the same type of media buildup where fans would go; I went to South Africa, we were told that we could be raped, murdered, and carjacked.

That was going to be on a good day. Nothing of the sort happened: fans came to find that it was a fantastic country, lovely people, great food, great environment, great reception; same with Brazil. … The media has kind of transferred this gross misrepresentation of England’s fans, because we were told all English fans were racists and xenophobes, fascists, hooligans and so on, and the vast majority are not.

REAM MORE: England Football Team on the End of a Flood of Online Memes

Sputnik: Who benefits from these accusations, which the newspapers are alluding to? 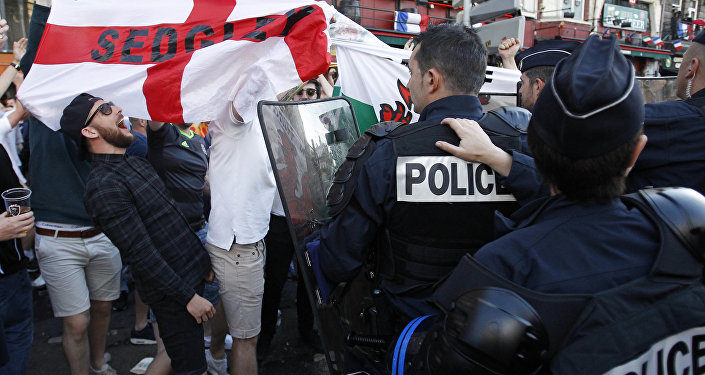 © AP Photo / Michel Spingler
England Fans Warned by UK Police to Be 'Culturally Aware' in Russia
Mark Perryman: I think grossly cynical, it’s the journalists and the owners of newspapers – the journalists want a story to write, and the newspaper owners want the newspaper to sell. And if you can create these extremities in coverage, in their major buildup, … in terms of violence, racism, authoritarianism and so on, then it sells newspapers, if you want to read about it and people are scared about it; and of course what happens is actually that it deters people from travelling. So, nobody really benefits from it.

What I said to English commutators, and hopefully it won’t offend Russian listeners: this is Putin’s great opportunity, this is Russia’s opportunity to showcase the World Cup; the last global sporting event of this kind of magnitude was of course Moscow 1980. Probably, the safest and best time you could possibly choose to visit Russia would be truly the four weeks of the World Cup, because … [anything dangerous] that might happen over other periods, simply won’t during the World Cup.

The views and opinions expressed by Mark Perryman are solely those of the speaker and do not necessarily reflect Sputnik's position.