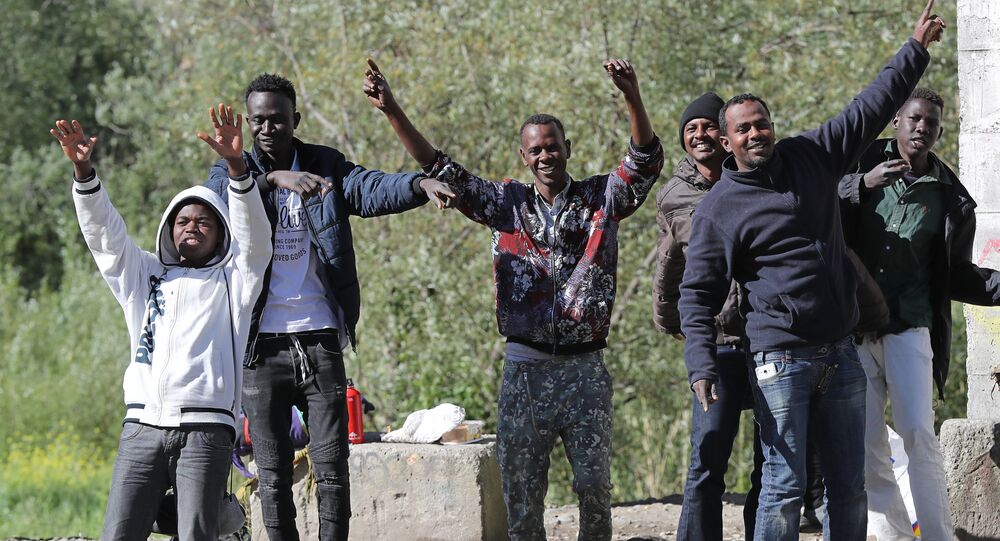 Earlier in the day, Italian Prime Minister Giuseppe Conte confirmed a planned meeting with Emmanuel Macron, which had been put at risk after the French president blasted Rome’s “cynical” response to the crisis over the migrant ship. Sputnik has asked Mario Borghezio, a member of the European Parliament, to analyze the spat between the two nations.

Reflecting on Macron’s accusations that the Italian government was “irresponsible” for denying entry to   the Aquarius vessel, stranded in international waters with hundreds of migrants onboard, Borghezio, a politician from Italy’s Northern League party, explained that Rome may have not opened its ports, but it provided “full humanitarian assistance" to those aboard.

“In this situation, Italy has given every guarantee that people rescued by Aquarius will receive full medical and humanitarian assistance,” Borghezio told Sputnik.

© REUTERS / Stefano Rellandini
Italy's Refusal to Accept Migrant Ship 'a Way to Provoke Reaction From EU' - Analyst
The MEP also defended the approach of the sitting Italian minister of the interior, who denounced the "hypocrisy" of the French government, whose border with Italy is closed, in order to prevent migrants from crossing the Alps to reach France.

Borghezio went on to say that the French side should recognize and accept the Italian point of view in order to renew the dialogue between the two nations, which “have traditional ties.”

The politician highlighted that it was essential to reform the 28-member bloc’s policies to boost security of the external borders of the European Union.

"As the German Interior Minister has recently said, it is necessary, above all, to defend the external borders of Europe. But we have to be united to do that, therefore we have to change the European policy."

Beyond criticism of the French government for its remarks on the Italian migration policy, Borghezio didn’t hesitate to explain what he sees as the “weakness” of Rome in the European institutions.

"Italy must play a more significant role among the EU countries. We are one of the founding nations and unfortunately, governments have created an image of being a weak country that does not have the courage to stand up for its positions on many issues, not just on immigration. This will change completely: Italy is becoming a sovereign country again," he added.

On June 14, Conte confirmed that he would meet the French president after French Minister for European Affairs Nathalie Loiseau made a statement that the two leaders had held a “sincere talk” despite the row and that Macron still wants the Italian prime minister to visit France.

Italy’s new coalition government has taken a hardline stance on migration, as the European Union seeks to negotiate the so-called refugee quotas and the Dublin rule, which requires that would-be refugees file for asylum in the first EU member-state they arrive in. In early June, Salvini travelled to Sicily, where he told the crowd that Italy could not be Europe's "refugee camp" and denounced the Dublin rule, which had led to “an obvious imbalance in management, numbers and costs,” penalizing Mediterranean nations.