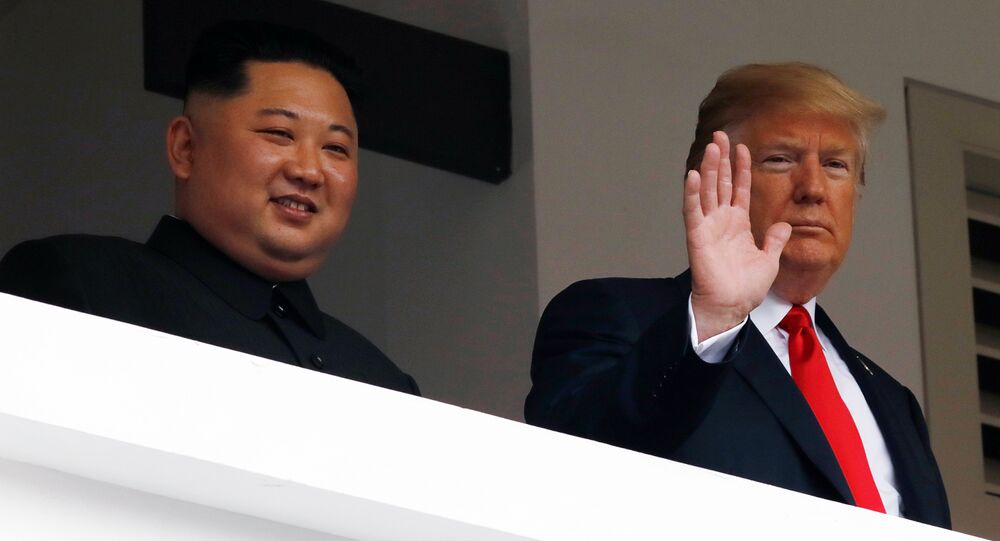 WASHINGTON (Sputnik) - Pyongyang and most of its neighbors will likely benefit the most from the US-North Korea rapprochement if it truly leads to regional stability although China may see it as a possible strategic setback and Russia may feel left out in the cold, analysts told Sputnik.

On Tuesday, US President Donald Trump and North Korean leader Kim Jong-un met at the summit in Singapore and committed the United States and North Korea to establishing new bilateral relations and building a lasting peace on the Korean Peninsula.

Trump and Kim signed an agreement at the end of a bilateral summit outlining the two countries’ commitment to work towards the denuclearization of the Korean Peninsula. The US president gave North Korea security assurances and indicated he would suspend military drills with South Korea, if Pyongyang gives up its nuclear development program.

While future success depends on the promised high-level follow-up meetings to implement the goals of the summit, the bigger winner of the first historic meeting is the North Korean leader, Charles Armstrong, Korea Foundation Professor of Korean Studies in the Social Sciences in the Department of History at Columbia University, told Sputnik on Tuesday.

"He [Kim] received recognition on the world stage by meeting as an equal with the President of the United States, and an agreement with the US to improve relations without conceding anything except to work toward ‘complete denuclearization of the Korean Peninsula,’" Armstrong said.

© REUTERS / Pool via Reuters
Kim Jong Un, Donald Trump, Accept Mutual Invitations to Visit Each Other's Countries
But overall, Armstrong added, if the summit fulfills its promise to build a stable peace on the peninsula the people of Korea will be the "biggest winners."

Professor Kanishkan Sathasivam from Salem State University also told Sputnik on Tuesday that there are a lot of benefits for North Korea from the outcomes of the Singapore summit.

"Ending their pariah status, integration into the global community, lifting of crushing sanctions, economic development, officially ending the Korean War, and strong security guarantees from the US," Sathasivam said. "The big potential disadvantage is that Kim may face some sort of coup attempt at home from people in the North Korean military who are angry about the rapprochement with the US."

The meeting in Singapore, which was held after intense trading hawkish insults and military threats is "entirely advantageous and there are no disadvantages," Sathasivam, who has served as chairperson of the Department of Political Science since 2008, said.

"The US is facing multiple problem situations in various parts of the world and would love to have at least one less major problem on their plate that they have to deal with," he explained. "Furthermore, this particular problem is a rare one in being a direct threat to the US homeland. So, a direct threat to the US homeland will be removed; the global nonproliferation regime will be re-legitimized and strengthened; and the US may gain the financial benefit of no longer having to spend money defending South Korea."

© REUTERS / Jonathan Ernst
Scholar on Trump-Kim Summit: Beginning of Road Full of Detours and Bumps
"But at the same time, if this process ends up a failure, the US still can go back to crippling sanctions or even war — which was very likely this year if this process had not been initiated," the professor added.

Sathasivam also pointed out that the summit outcomes are good for both the region and for the world, and believes that "South Korea and even Japan will see it in completely advantageous terms."

While the summit between Kim and Trump was vital and extremely important, its results are still very limited and lack some concrete actions.

Armstrong told Sputnik that on a scale of one to 10 (with 10 being the best), he would give the summit a 7.

"It is a very important declaration of principles and goals but very vague on specific actions," he said.

The professor went on to say that two important elements were missing.

"There was no mention of any process for dismantling North Korea's nuclear program, and no mention of establishing liaison offices or other concrete steps toward normalizing relations between North Korea and the US," Armstrong explained. "The joint declaration was much less detailed and specific than the inter-Korean Panmunjom Declaration of 27 April."

© REUTERS / Susan Walsh/Pool
Substantive Achievement of Kim-Trump Summit: US and North Korea Commit to Korean Peninsula Denuclearization – Prof
Sathasivam also stressed that the meeting between the US and North Korean leaders was "extremely significant."

"Even though the US has had poor relations with several other countries in recent years, Cuba, Iran, Myanmar, etc., the estrangement was by far the deepest and widest with North Korea," he noted. "So, to be able to bridge that wide gap, and do it so very suddenly and quickly, is an amazing feat. And, since the standoff with North Korea originated during and because of the Cold War, this breakthrough can be seen as the closing of the last chapter of the Cold War."

Sathasivam pointed out, however, that the outcomes are very limited for now.

"That is to be expected since this was just one five-hours long meeting. But within these expected limits, it has been a very good and very successful meeting," he added. "If the two sides can continue to build on this meeting in good faith and honor, then the eventual outcome can only be a very positive thing for everyone – the US, North Korea, the region and the world."

Sathasivam believes that Russia and China may feel uncertain and have some doubts about the summit.

"China and Russia, however, may have some misgivings. For China, despite all of their rhetoric, I believe there are those in high levels of the government, and perhaps President Xi [Jinping] himself, for whom having this issue remain active is a good thing as a way of making things difficult for the US," the professor said. "For Russia, I think President Putin may be a little unhappy that he does not get to be a direct participant in this process even if he generally agrees with its direction and outcome."

The Russian Foreign Ministry said in a statement on Tuesday Russia welcomes the US-North Korea summit and will continue to make efforts to support the political and diplomatic process on the Korean Peninsula. The ministry added it believed that the normalization of the countries’ bilateral ties, for which they said they were aiming, was an integral part of the resolution of the Korean Peninsula’s issues.

© REUTERS / Jonathan Ernst
'Document Was Going to Be Vague': Analyst Explains Trump-Kim Summit Results
Russian Foreign Minister Sergey Lavrov said that the very fact of the meeting was possible, but noted that the Russian side has not seen any documents yet. China, in turn, said that the results of the Trump-Kim meeting were an important step toward denuclearization and lasting peace on the peninsula.

In June, China proposed a so-called double freeze plan which stipulated North Korea ceasing its nuclear activity in exchange for the United States and South Korea halting their joint military drills near the peninsula. Russia supported the Chinese initiative and proposed to develop a roadmap for the gradual restoration of trust and creation of conditions for resumption of six-party talks. Back then, Washington rejected the plan. During Tuesday's summit, Trump pledged to stop the US-South Korea war games, which he called "provocative" and "inappropriate" under the circumstances of negotiating a deal with Pyongyang, which in its turn reiterated its denuclearization commitment.