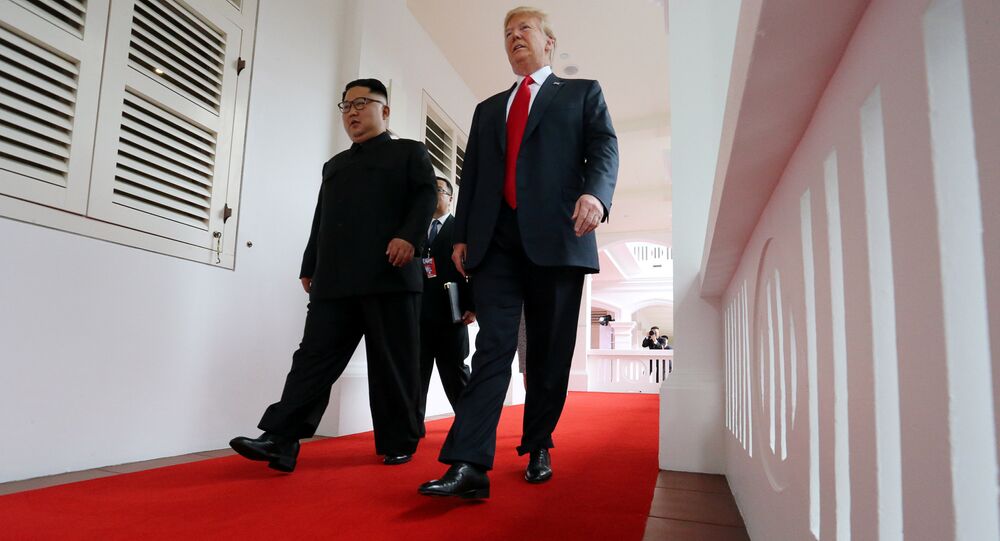 US President Donald Trump and North Korean leader Kim Jong-un have held their first ever meeting in Singapore. The sides signed a four-point declaration, which includes a commitment to establishing bilateral relations, joining efforts to build peace and the denuclearization of the Korean Peninsula.

Sputnik discussed the first ever summit between an incumbent US president and a North Korean leader with Charles Armstrong, a historian and professor of Korean Studies at Columbia University.

Sputnik: What can you say about what this will actually mean for North Korea and for its leader?

Charles Armstrong: Well it's in many ways a great victory for Kim Jong-un. He is in a certain sense a real winner of this. This kind of a face-to-face meeting with a US president is something that North Koreans have wanted for decades and Kim Jong-un can say he succeeded.

He was the first leader to get the US president to meet with him and he can bring back this great victory to his country and focus on what he says his priority now, which is the shift from the nuclear weapons development to improving the North Korean economy.

Sputnik: How would you assess the agreement that they ended up signing? There is split here: some people are downplaying the importance of what is actually outlined and others are saying "this was a great result and more than we could actually have hoped for."

Charles Armstrong: Well, I expected the meeting to result in a declaration of principles and goals rather than something with specific, action implementation elements; but I have to say it was even more vague and lacking in substance than I expected. It has got a lot of great language in it about improving relations, moving towards peace and prosperity, a stable peace regime, but almost nothing concrete is offered.

It doesn't say specifically that North Korea will give up its nuclear weapons, only that North Korea is committed to working towards complete denuclearization of the Korean Peninsula. And perhaps the only specific item mentioned in a declaration is commitment to recovering US POW [prisoners of war] remains from the Korean War, which is very important, but really is not the top priority towards achieving peace on the Korean Peninsula.

Sputnik: Do you think there could be any other concessions, short of lifting sanctions, by the US and/or other countries in the world, the UN and so forth?

Charles Armstrong: I think that lifting sanctions is probably the key priority right now, but I think that… One thing that surprised me is that there was nothing in the joint statement or comments about how to really move forward with reducing tensions and normalizing relations, such as setting up liaison offices in each other's' capitals or hotline between the two militaries and so on. We will see.

I think, suspending military exercises is the one thing the US can rather un-problematically do in order to get concessions from North Korea, because lifting sanctions, at this point, before North Korea moves forward toward denuclearization, will encounter a lot of resistance from other people in the American political system.

So, this is just the beginning of what is going to be a long and complicated road with many detours and bumps, no doubt and we will see what happens as it is going forward.