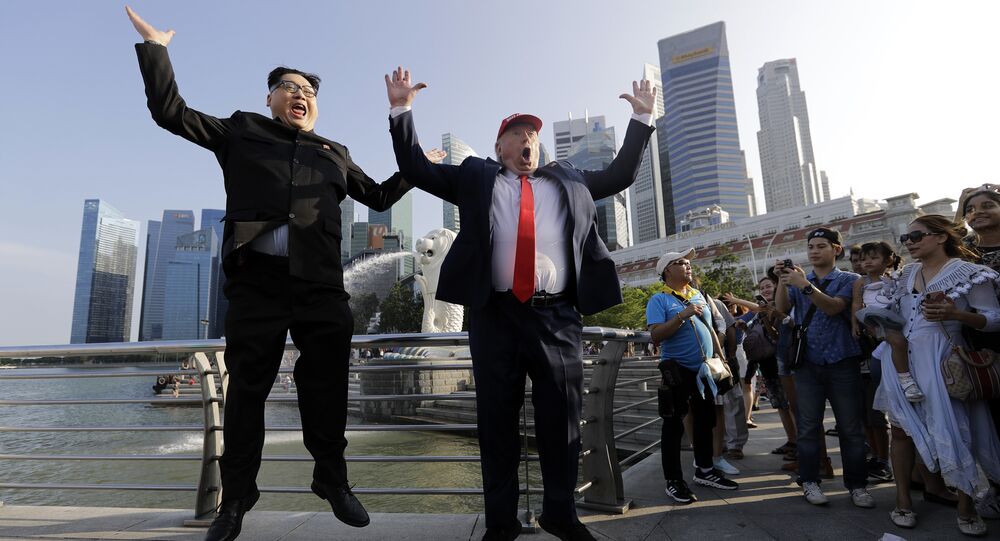 The leader of North Korea and the US president will meet during a summit in Singapore slated to take place on June 12, where they will discuss the prospects for denuclearization of the Korean Peninsula and lifting of the sanctions imposed on the DPRK. Sputnik questioned South Korean scholars on their expectations for this summit.

Paik Hak-soon, the president of the Sejong Institute believes that Trump's words of being able to determine the "sincerity" of Kim Jong-un's intentions in one minute is a sign that the two countries have already reached an agreement on the summit's agenda. The scholar is confident that the summit itself is a result of a mutual understanding reached between Washington and Pyongyang that all future agreements must be adhered to by the parties to them.

The head of the Sejong Institute also pointed out that the Singapore summit will likely be surrounded by an aura of pomp and circumstance, although it won't last long as most of the key events will take place on the first day. Paik Hak-soon added that DPRK would expect to receive guarantees for maintaining its hold on power and economic cooperation in exchange for abandoning the nuclear program.

"In order to reach an agreement at the first stage, all mutual demands in the sphere of security, diplomacy, economy, etc. will be laid out on the negotiating table and will become a part of a 'comprehensive package deal.' The next stage will see the implementation of this deal on two parallel 'tracks': meeting on denuclearization on the one hand and fulfilling obligations promised in return for denuclearization, on the other," Paik Hak-soon said.

Park Won-gon, a professor of international relations at Handong Global University, has a different opinion on preliminary agreements. He said that one can only judge their existence after the first meeting between Trump and Kim Jong-un. The scholar is confident that if such agreements are reached, the summit will be a success.

READ MORE: Tea for Two: What May Come of Trump-Kim Summit in Singapore?

At the same time Park Won-gon pointed out that no agreement has so far been reached on Complete Verifiable Irreversible Guarantees (CVIG) [the US part of the project with the DPRK, which in turn would provide similar guarantees on denuclearization — CVID]. According to him, this means that a lot of points remain to be discussed by the sides.

The professor noted that it is also hard to judge the existence of any preliminary agreements due to the fact that everything about the Singapore summit is aimed at creating a "dramatic effect."

"Trump claims that 'he has been preparing for this dialogue [between the US and DPRK] his whole life' and calls himself a 'master of the deals,' forming public opinion on the upcoming meeting as a process of striking a deal. He also actively uses his 'unpredictability' and tries to make everything as exciting as possible," Park Won-gon said.

The scholars questioned by Sputnik also disagree on the predictions concerning a possible peace agreement. Paik Hak-soon expressed an opinion that since the president of South Korea was not invited to the summit, there will be no announcement on officially ending the Korean War.

"The best option to announce it would be to do so in Panmunjom on July 27 [where the Korean Armistice Agreement was signed 65 years ago]," the head of the Sejong Institute said.

On the other hand, Trump might want to use the opportunity to improve his own image and preliminary announce the end of the war, the scholar added.

Park Won-gon recalled Trump's words saying that it is easy to strike such a peace agreement, but it is hard to tell what new problems it may create.

"If Trump hurries with announcing the end of the war, he may face domestic criticism, claiming he 'got nothing from North Korea, but already made concessions,'" the scholar said.

The professor also noted that China had already announced its position saying that Beijing is an important party that must also be responsible for announcing the end of the war. According to Park Won-gon, this means South Korea will have to take the US and China's position into consideration, when negotiating a peace agreement with DPRK.