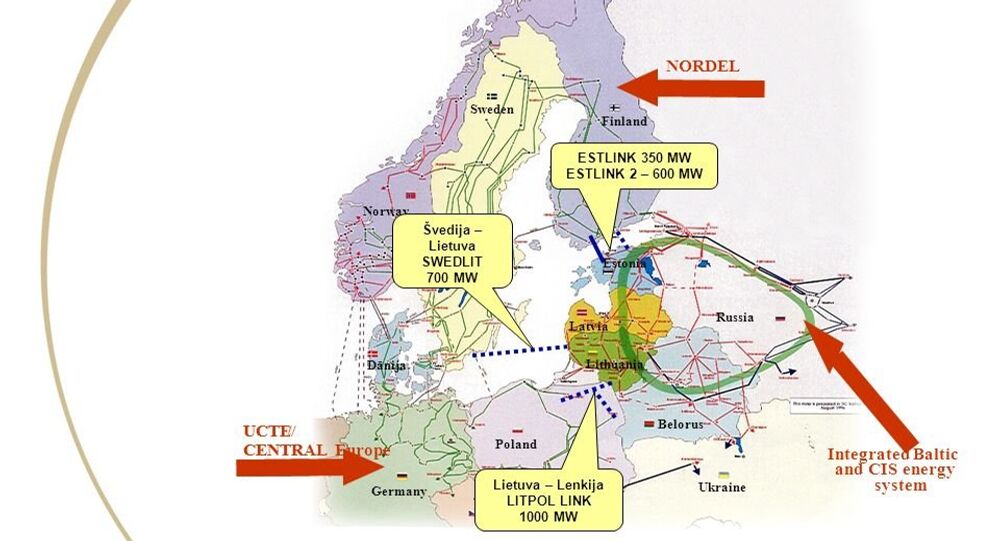 Amid NATO's ongoing military buildup in the Baltic countries, and former Estonian President Toomas Hendrik Ilves' recent warning that Russia would "lose St. Petersburg" if it dared attack the region, its current leaders have said that the countries have something much more tangible to 'fear' from the east.

Speaking at a press conference of the Baltic countries' prime ministers on Monday, Lithuanian Prime Minister Saulius Skvernelis complained that even though Lithuania, Latvia and Estonia have now been part of the European Union for close to 15 years, they remain stuck with an electrical power transmission system connecting them to Russia.

Estonian Prime Minister Juri Ratas assured his colleague that the Baltics are set to strike a deal with Poland later this month on how to integrate with the continental European grid. "The separation of our electricity system from Russia and its integration into Europe will increase our security," Ratas said.

© Sputnik / Sergey Guneev
Estonia Warns Russia It May Lose St. Petersburg – Ex-President
The Baltic states are part of the Soviet-era BRELL energy ring linking Belarus, Russia, Estonia, Latvia and Lithuania, and remain dependent on the system despite repeated pledges to exit and join the European grid with grant support from the EU's 'Connecting Europe' fund.

According to Finland's Helsingin Sanomat newspaper, the Baltic countries may face a 'hybrid threat' from Russia via the electricity grid if Moscow withdrawals from the BRELL ring in the 2020s, when Kaliningrad becomes more energy independent. The Russian exclave is currently building a nuclear power plant which is expected to come online in the mid-2020s.

The three countries have pledged to disconnect from BRELL by 2025 and join the European system via Poland. There is currently one cable link between Poland and Lithuania, known as LitPol Link, and Warsaw is negotiating more connections. However, as Helsingin Sanomat points out, these projects have considerably low capacity than the Baltics' connection to Russia.

Arvi Hamburg, chairman of the Energy Council of the Estonian Academy of Sciences, calls the plans to switch "a political project," and questions their effectiveness. "Taxpayers will incur additional costs, but our energy security will not increase," the expert said.

© REUTERS / Ints Kalnins
NATO Special Forces Conduct Trojan Footprint Drills in Baltic Region - Estonian Military
Challenging Prime Minister Ratas' suggestion that being part of the BRELL network is a security risk, Hamburg pointed out that Russia could not even cut off its capacity, at least not to Estonia, since the country is largely energy self-sufficient. He also stressed that Kaliningrad's energy output would be more beneficial as part of a larger system than a separate energy island, and that cutting the BRELL network would therefore make no sense for Russia.

Despite joining the European Union and NATO in 2004, Estonia, Latvia and Lithuania remain connected to Russia in a variety of ways, including rail gauge, oil and gas pipelines, and energy grid infrastructure. Before the 2014 crisis in relations, their economies were also heavily dependent on Russia's, and subsequently hit hard by the agricultural sanctions/countersanctions war between Russia and the West.