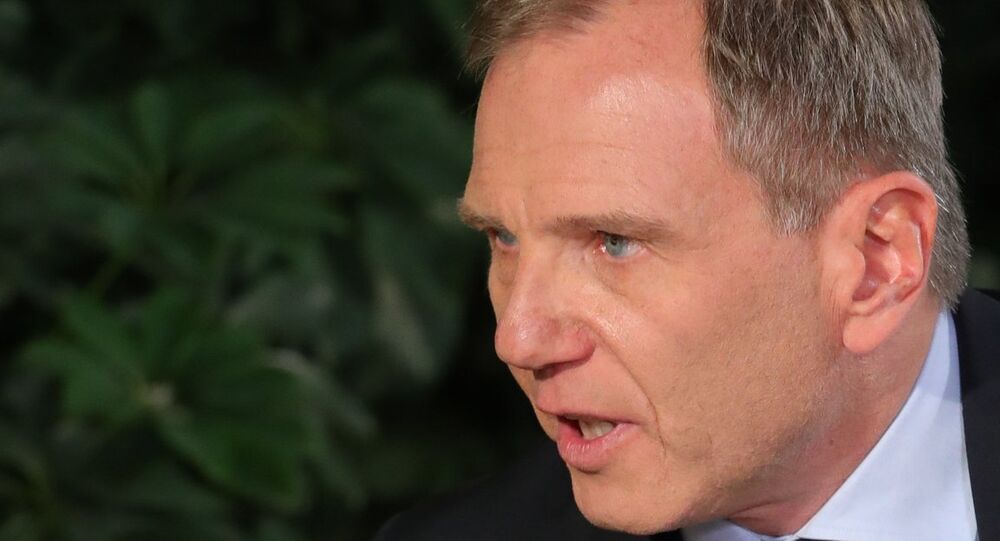 German Media Has Lost Its Grip on Reality - Analyst

Leading German-language media outlets are creating their own conception of the world, indoctrinating themselves and thereby losing their grip on reality.

It is clearly demonstrated by their coverage of Russia-related issues, Ulrike Reisner, a political analyst with "Creative Diplomacy" (PICREADI), said in her analysis of the latest interview of Russian President Vladimir Putin with the Austrian Broadcasting Corporation (ORF).

In the run-up to his June 5 visit to Vienna, Putin gave an interview to ORF host Armin Wolf. The latter repeatedly interrupted the president, which ultimately led to Putin at one point asking the interviewer to be patient and let him finish before asking any further questions, quickly switching to German to convey his message.

The research starts with a short historical overview of Austrian-Russian ties, stressing that Vienna’s attitude toward Moscow has long been "marked by a combination of commitment and pragmatism."

The author noted that the two countries had consistently encouraged economic cooperation, tourism exchanges, as well as maintained strong ties in the energy sector.

© Sputnik / Mikhael Klimentyev
Austrian Host Sheds Light on His Toughest Interview – With Vladimir Putin
Austria, for example, has been purchasing Russian gas since 1968 – the fact that Vienna was the first country in Western Europe to sign a supply contract with the then Soviet Union might yet again be explained by pragmatic commitment, Reisner said.

According to the researcher, the Austrian public accompanied Putin’s state visit with predominantly friendly interest, unlike media, which has got so politicized that it has ultimately lost grip on the reality.

"Media reality, however, looks somewhat different … German language media is decreasingly committing itself to the diversity of opinions, but increasingly indoctrinating the public with its political and social dogmas. This, at the moment, specifically refers to Russian politics," the interview’s analysis, providing an insight into the issue, read.

Interruptions, Simplification to Give Desirable Twist to Interview

The research notes that the analysis of the content and the wording of the interviewer's questions revealed his preconceived opinion on the issues concerned.

"The interviewer did not ask questions with an intention to collect new information, but merely asked questions to get his own opinion confirmed. This procedure requires a special kind of questioning technique, including interruption, offence, leading questions, erratic changes of topics, and sometimes even provocation," the paper said.

© Sputnik / Mikhael Klimentyev
Putin Speaks German to Ask Austrian Journalist Not to Interrupt Him (VIDEO)
The research said that, instead of having been qualified as an example of "rude and unprofessional behavior," the interview was touted by the broadcaster as an "impressive journalistic achievement."

Another unwritten law of this interview technique is to keep the message simple, which "should not be allowed to falter due to complex and challenging answers on the part of the interviewee," the research noted.

The expert pointed to the interviewer’s implicit message, which had been pushed through during the interview — that the famous quote of Louis XIV – L´Etat c’est moi – could be allegedly projected on Putin.

Editing and 'Nuances' in Translation Also Come in Handy

A comparison of the interview’s "full versions," published on the Kremlin’s and the broadcaster’s websites also sheds light on how editing was used for simplification of messages.

The research noted that the broadcaster’s version did not contain all of Putin’s remarks on the alleged chemical attacks in Syria, pointing to their staged nature; and entirely omitted his comments on former Georgian President and ex-Governor of the Ukraine's Odessa Region Mikheil Saakashvili.

© REUTERS / Francois Lenoir
Putin on MH17 Crash: No One Takes Russia's Arguments Into Account
"Although the reasons for this might be manifold and justify further analysis, it is a fact that this piece of information was kept away from the audience completely – unless Russian sources of information weren’t used," the paper concluded.

Finally, the research looked into how the desirable narrative was subtly supported by biased wording.

The paper brought the overuse of the term "Machthaber" (potentate) by German media as an example. The term has predominantly negative connotations and is generally applied to what it considered to be totalitarian or abusive regimes.

To conclude, the research noted that the interview had been hyped as something extraordinary, a message which was also based on the fallacious assumption, as senior Russian officials regularly give interviews to various media outlets from all over the world.

© Sputnik / Alexei Druzhinin
Tough on Camera, Likeable Off: Megyn Kelly Reveals What It Was Like to Interview Putin
Predominantly positive reflections on the interview and the interviewer were published in leading German language media the day after the broadcast, while the work was also cited and re-cited by almost all global media, the research noted.

So, the interview technique has not been questioned, though one of the ORF’s core principles is to ensure objectivity, the report concluded.

PICREADI — Public Initiative "Creative Diplomacy" — is a Moscow-based non-governmental organization founded in 2010 by a group of new generation experts committed to develop and support civil initiatives in public diplomacy and foreign affairs.

US Media Giants Cleared to Bid For Sky Takeover