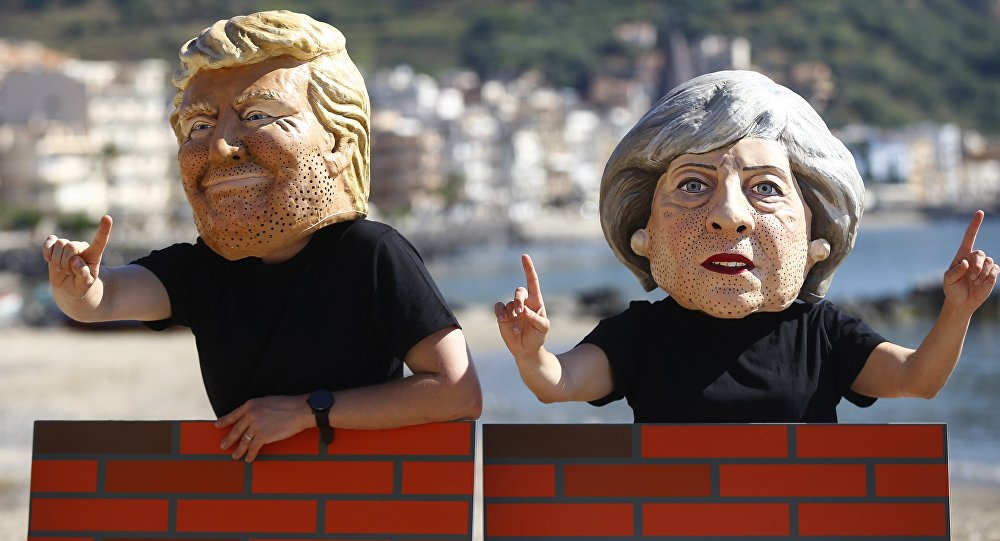 According to US media reports, UK Prime Minister Theresa May will use the G7 summit in Canada to extinguish a plan to counter alleged Russian aggression. Sputnik has discussed Theresa May’s agenda for the meeting of the world’s largest economies in Canada, which begins on June 8, with Earl Rasmussen of the Eurasia Center think-tank in Washington.

Sputnik: What is your take on the alleged British proposal to counter an alleged Russian threat? Does it come as a surprise to you?

Sputnik: What is your take on what Theresa May is bringing to this summit? Do you think she stands with the other European members that are attending? What do you think about her relationship with Donald Trump?

Mr. Rasmussen: Yes, the relationship with her and Mr. Trump is – with almost anyone I think –is challenging. He’s unpredictable. And his mode of operation is that he likes to be, even in this business environment, he likes to be unpredictable. I think that’s frustrating for a lot of the other leaders, especially the backing down of international agreements. That has really gotten people upset, and the trade war.
What is Theresa May bringing to the table here? I don’t think she’s aligning completely with the rest of Europe. She’s got a lot of issues going on, Brexit, the whole complete failure of the Salisbury, Skripal’s case, backing the US with the false-flag chemical attack in Syria. She’s got a lot of issues and she’s got a lot of challenges, I think. I would be surprised if she still prime minister next year some time.

Sputnik: One of the things she’s going to be discussing at this meeting is she wants to have a special response, international rapid response unit, to deal with Russian assassins. Is that going to be one of the biggest deals during this meeting?

© REUTERS / John MacDougall
German FM Refuses to 'Hush Up' EU-US Tensions as War of Words Heats Up
Mr. Rasmussen: We’ve got a lot of issues. You see a strong business side on Germany, especially Germany, and France. Then you’ve got the establishment of the new government in Italy; you’ve got Greece, Bulgaria, you’ve got the Czech Republic, you’ve got a strong feeling within the EU to grow and continue to build the relationship with Russia, and kind of get past where we have been, to move forward. Obviously, the UK is fighting that, and, perhaps, is aligned with some people within our own US government as well. I think that it’s partly the reason; I don’t think that she’s aligning with the intentions, underlying intentions. One of the things that they are obviously going to have to decide on within the EU is whether to continue sanctions on Russia. So, I think, this is a mechanism to raise the Russia hype and Russia scare although it’s really not there, in preparation for that as well.

Sputnik: On the other hand, we have Europe. And I don’t know if she is not really in sync with them. To what extent do you think the potential trade war with the US, between the US and Europe, will actually affect whether or not Europe drops sanctions on Russia?

Mr. Rasmussen: I don’t know if they are going to at this point, because the US will probably put strong pressure on them. … The businesses are losing like a hundred billion euros a year. Then the sanctions and [threats] on the Iranian side and on the trade side, it’s not just Russia. It’s also backing out of the Iran deal and threats of sanctions related to that, and then a trade war here. So we are talking about hundreds of billions of euros a year of lost revenues for European businesses. At some point governments need … look at reality.

I think the US is becoming more isolationist; and I think, the UK is being forced into that role as well. Hopefully the Europeans will stay together, although they’ve got internal challenges as well. But I think you’ll see a gradual softening of the relationship between the rest of the EU and Russia. They have got to look out for their own citizens, their own security.

Sputnik: The Europeans have asked to be relieved from the sanctions, the secondary sanctions that would apply to European companies. What do you think is going to come of that? Do you think that the Europeans will end up having to pull out of the JCPOA?

© REUTERS / Christian Hartmann
Trump Fires Back at France, Canada as Macron Speaks of 'G6' Confronting US
Mr. Rasmussen: I personally think that the JCPOA […] was a very good agreement. It could have been a little more rigid, but I think that it was a very good agreement and backing out of it, I think, was a huge mistake for the US. And then to further sanction our allies, if they continue to support an international, not a US, not a bilateral agreement, but an international one, approved by all five [UN] permanent Security [Council] members, this is very damaging for the US’s reputation.

The views and opinions expressed by Earl Rasmussen are those of the speaker and do not necessarily reflect Sputnik's position.