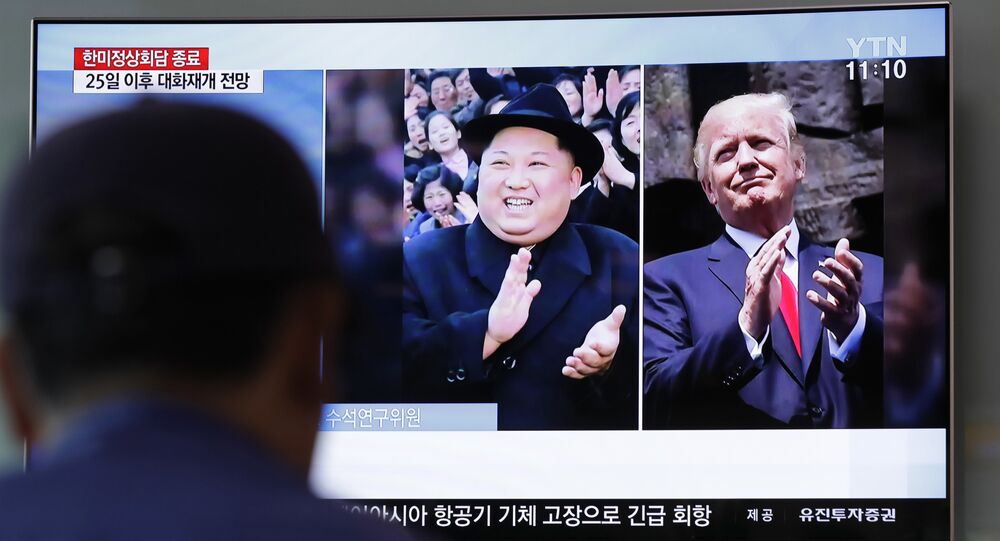 Tommy Yang - If US President Donald Trump and North Korean leader Kim Jong Un fail to produce a concrete timeline and define a specific date for the complete elimination of Pyongyang’s nuclear arms program, the highly anticipated historic summit between the two leaders could become a total failure for Washington, experts told Sputnik.

After more than two weeks of what is described as "microwave diplomacy," when officials from both the United States and North Korea worked around the clock to straight out key differences, the first summit between current leaders of the two nations is expected to take place on June 12 in Singapore as originally proposed.

The extra diplomatic efforts from both sides became critical in saving the summit, after Trump sent a letter to Kim Jong Un on May 24 announcing his decision to cancel the meeting due to "open hostility" from the North Korean side. Trump subsequently reversed his decision, after Pyongyang softened its rhetoric and sent a senior official to deliver a personal letter from Kim Jong Un to the White House last week.

Despite Trump’s swift change of heart on the summit being viewed as his typical strategy to gain an upper hand in ongoing negotiations, his meeting with Kim Jong Un needs to produce a concrete timeline clearly defining a final date when North Korea will denuclearize completely to avoid turning into a debacle, political analysts argued.

"During the summit in Singapore, it’s possible for both sides to make concessions. The United States could accept the proposal from North Korea that it will be a phased denuclearization process. But Trump needs to demand a specific timeline for it. For example, complete denuclearization needs to finish before June 30, 2019. It’s fine to divide the one-year time frame into 100 phases. But the ultimate goal is to accomplish complete denuclearization. If the final agreement from the summit does not include a specific date like this, it means that the summit has absolutely failed. If that happens, it’ll be a major victory for Kim Jong Un and demoralizing defeat for Trump," Zhang Liangui, an expert on North Korea at the Central Party School, which trains Chinese officials in Beijing, told Sputnik.

During meetings with senior officials from China and Russia, Kim Jong Un expressed his willingness to commit to a "phased and synchronized measures" toward denuclearization in recent months. In the Panmunjom Declaration released following the inter-Korean Summit in April, the two Koreas said they agreed to carry out disarmament in a "phased manner."

The expert explained that previous failed peace talks such as the six-party talks during the 2000s proved that North Korea’s promise on denuclearization without agreeing to a detailed and executable schedule could not resolve the nuclear crisis.

© AFP 2021 / Anthony Wallace
Who Will Pay for Kim Jong-un’s Hotel Room During US-DPRK Summit?
"To be honest, if we follow the phased denuclearization process as North Korea proposed, it’s very likely to repeat what happened during the six-party talks. From the beginning of the six-party talks in 2003 to its end in 2009, all parties negotiated for over six years without reaching any substantial results, which only led North Korea to become a nuclear state. For example, if North Korea demands to divide the denuclearization process into 10 phases with each phase being 2 years, it means it would take 20 years for it to complete. This kind of promise becomes useless, because who knows what will happen in 20 years. Sadly, many people did not take the lessons from the failed six-party talks seriously," he said.

To resolve security concerns over Pyongyang’s nuclear arms program, six nations, including North Korea, South Korea, the United States, China, Japan and Russia, held a series of meetings in the Chinese capital Beijing from 2003 to 2009. But negotiations failed after North Korea decided to pull out of the six-party talks in April 2009 and resumed its nuclear enrichment program.

After Trump released the letter publicly to terminate the summit with Kim Jong Un in May, the North Korean leader invited South Korean president Moon Jae-in for a surprising unplanned meeting and reiterated his commitment to denuclearization, as part of his efforts to save the summit. Trump also praised warm and productive statement from North Korea when he decided to reinstate the summit.

For Kim Jong Un, securing a meeting with the US president can already be declared as a political victory, experts suggested.

© AFP 2021 / Markus Schreiber / POOL
DPRK Makes Money Off US, Its Allies by Selling VPN, Facial Recognition, Encryption Software to Them - Report
"Kim Jong Un is very much into having a summit with Trump. It will be a symbolic concession to North Korea. When you haven’t really worked out regarding to the roadmaps and time framework of denuclearization, holding a summit meeting with a North Korean leader is already a concession [from the United States]. That’s because North Korean leaders have aspired to hold a meeting with a US president for a long time. But the US position has always been: you have to denuclearize and become a normal state first. I think this has been the consistent position from the US side since the Bill Clinton administration," Kim Jae-chun, an international relations professor at Sogang University in Seoul and a former South Korean government adviser, told Sputnik.

For Trump to declare his summit with Kim Jong Un to be a success, he has to produce a better nuclear deal with North Korea than the one he withdraw from recently with Iran, the Seoul-based expert argued.

Trump announced his decision to pull out of the JCPOA on Iran’s nuclear program in early May.

"The fact is this [the JCPOA] was a horrible, one-sided deal that should have never, ever been made. It didn’t bring calm, it didn’t bring peace, and it never will," Trump said in a statement released by the White House.

© AFP 2021 / EPA PHOTO/PA/TIM OCKENDEN
US Diverts B-52 Bombers From Korean Peninsula After DPRK Threat to Kill Summit - Reports
South Korean president Moon was completely blindsided when Trump announced his decision to cancel the summit with Kim Jong Un abruptly in May. A photo circulated widely on social media showed Moon frowning heavily while hosting an emergency meeting in response to Trump’s shocking decision.

Since taking office in May last year, Moon has always worked to improve relations with North Korea and facilitated communications between Trump and Kim Jong Un to make the summit in Singapore a possibility. The South Korean president is likely to seek to benefit from a successful summit between Trump and Kim Jong Un by joining the two leaders in Singapore after the summit and agree to a joint peace treaty to end the Korean War officially, professor Kim from Sogang University suggested.

"Moon’s position has always been: as long as there is a summit and the leaders walk out together with smiles on their faces, it’ll be his definition of success for the summit. As soon as the summit concludes, Moon would be very quick to demand the declaration on the end of the Korean War. I think he’s very anxious to fly to Singapore on June 13 and declare the end of the Korea War together with Trump and Kim Jong Un. He’s just keeping a low profile right now, because he’s not 100 percent certain what’s going to happen during the Trump-Kim summit," he said.

The expert added that Moon plans to vote early in a local election, expected to take place on June 13, to clear his schedule for possible a possible trip to Singapore.