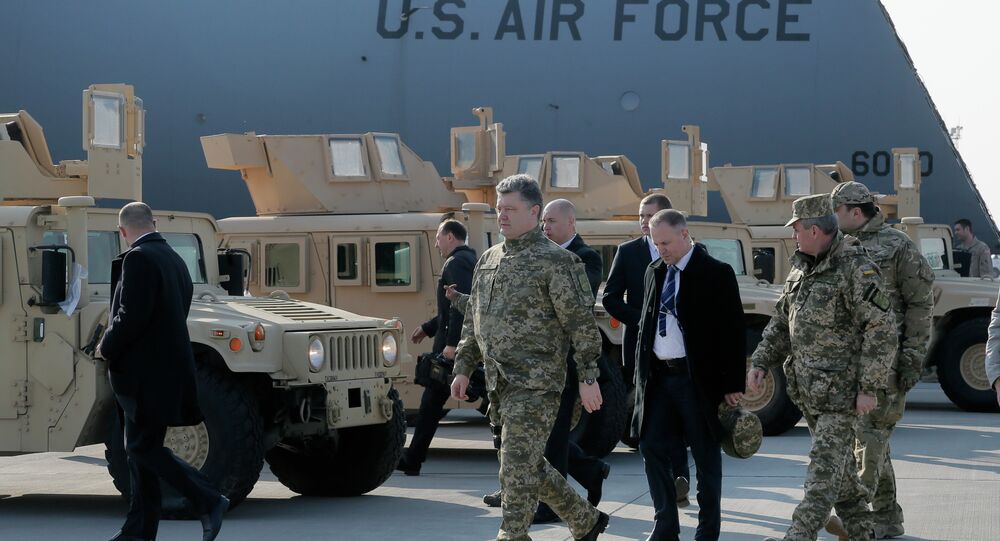 The US State Department has been reluctant to criticize Kiev for cracking down on Russian journalists including last month after Ukrainian Security Services staff broke into the office of RIA Novosti Ukraine in Kiev and detained reporter Kirill Vyshinsky.

Former US Army Major and historian Todd Pierce told Sputnik on Tuesday that the US government or any US media outlets were unlikely to have any objections with Poroshenko’s comments because the remarks support a broader anti-Russian agenda and because free press is no longer an American value.

"Since 2001 US corporate press has completely given itself over to the US government’s ‘Perception Management,’ meaning a constant ‘conditioning the battlefield’ in the words of the Rand Corporation," Pierce said.

For example, Pierce explained, Poroshenko accusing Russian state media of triggering instability as his own government prosecutes journalists is what US psychological operatives call "projection," a cognitive dissonance of sorts that distracts from the truth and deflects attention to reinforce other ready-made false tropes and narratives.

© Sputnik
"Murdered" Journalist is Alive - Poroshenko's Credibility in Question
In fact, the Ukrainian president was not required to produce any evidence to support his false and unsubstantiated claims for Washington or the mainstream American media, Pierce observed.

The media in neither the United States nor in the European Union was interested in reporting accurately on the suppression of press freedom in Ukraine because they followed official positions on whipping up distrust and conflict with Russia instead, Pierce warned.

"They don’t want to as inciting war against Russia is deemed in our [Western] 'interests,’" he said.

The US government would not correct Poroshenko’s false and unsubstantiated accusations and would continue to ignore the significant influence of neo-Nazi movements in Ukraine, American University in Moscow President and Founder Professor Edward Lozansky told Sputnik.

"I think that as long as neo-Nazis help in exerting pressure on Russia one shouldn't expect criticism of them coming from the official Washington," Lozansky said.

© AP Photo / Sergei Chuzavkov
Poroshenko Asks World for 'Formula to Counter Russia's Meddling in Any Election'
Poroshenko’s very government was the outcome of fabrications and US spin, he said. The 2014 riots, for example, were falsely portrayed by the United States as a popular uprising, Lozansky explained.

"The whole Maidan Revolution had nothing to do with freedom, democracy or helping the Ukrainian economy," he said. "It was all about the geopolitical weakening of Russia without any regards to the interests or sacrifices of ordinary Ukrainians."

The anti-Russian bias in the US and Canadian governments and their support of Nazi forces in Ukraine was a continuation of notorious policies that both countries had adopted to protect Nazi war criminals after World War II, Lozansky pointed out.

"There is nothing new. Back in the Soviet times the US and Canada provided refuge to many Ukrainian Nazi collaborators who could be useful in the potential conflicts with the USSR," he said.

© AP Photo / Valentyn Ogirenko/Pool
Germany Surprised Over Twist in Journalist Babchenko Case, Urges Investigation
In late May, Kiev introduced sanctions against Rossiya Segodnya Information Agency, which Sputnik belongs to, and RIA Novosti Ukraine portal. Margarita Simonyan, the editor-in-chief of RT broadcaster and Sputnik news agency, hit back at misinformation allegations in an April interview to the Swedish SVT channel. Simonyan said that Western media often used every opportunity they had to show Russia in a bad light.