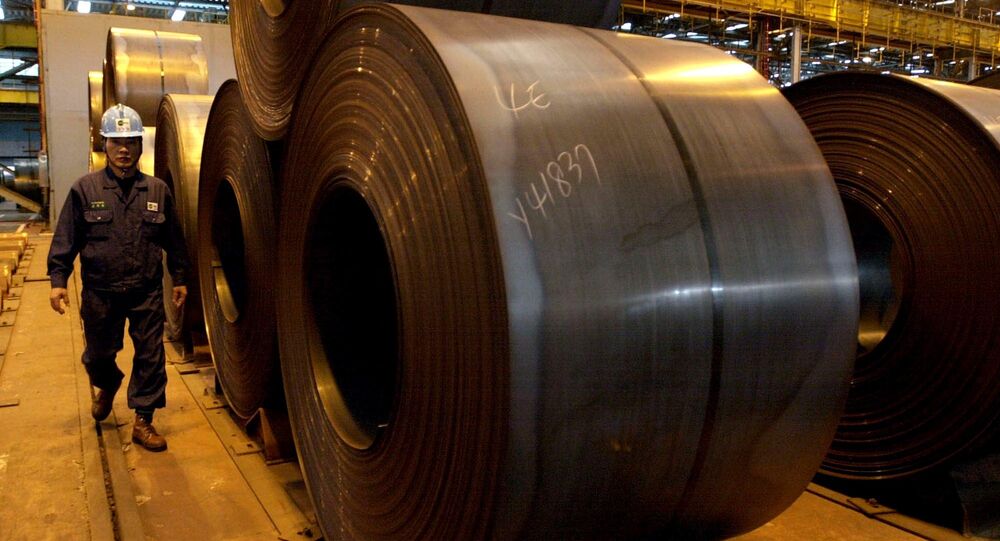 Washington is facing criticism from its G7 allies over the US steel and aluminum tariffs. In the run-up to this week’s G7 summit, finance ministers and central bank governors from six of the group's countries have slammed the US decision and vowed to fight back. The French economy minister also warned that a trade war could begin in "a few days."

Sputnik: More than a ripple, of course, of response, there's been a lot of response coming in from both targeted countries and the EU in general. France has given the United States a few days to avoid a full out trade war, in your opinion what are the chances that Washington might backtrack?

Raoul Leering: First of all this is definitely a setback for Donald Trump, he has been following a strategy of trying to blackmail countries by giving unilateral concessions to the US without having to give anything in return, he wants better terms of trade for the US and what he does give in return is take away the tariffs for those countries that he has exempted.

© REUTERS / Fabian Bimmer
G7 Vows to Fight US Steel, Aluminum Tariffs
There are a few countries that have given in to that demand from Donald Trump, South Korea, Argentina, Brazil and China to a certain extent, but a few countries have not given in, especially the EU, which is definitely a setback because retaliation will happen now and that means that there will be a negative side to this for Donald Trump as well, economically speaking.

Sputnik: Let's look at some of the likely retaliatory scenarios coming out of Europe.

Raoul Leering: It's really scattered, we see that according to the WTO rules we cannot retaliate to the full amount of this 6.4 billion tax that the US has put on steel and aluminium from the EU, but it's 2.8 billion and then scattered among 185 products, so it will not be of a very significant influence for a lot of those products, but it's more politically determined because he's targeting those products of important Senate members of the Republican Party.

Sputnik: What kind of an impact are we going to expect from all of this on the Eurozone and growth predictions of the European Union?

Raoul Leering: Well, that package of 6.4 billion tariffs on us, export of 6.4 billion euros of aluminium and steel if you look at total exports is only a third of a percentage of total EU exports worldwide.

So it's relatively limited and if you express it in terms of the GDP it is even smaller, but the danger of all of this is that it can escalate into a much broader trade war, which would then have a much more significant effect on the European economy than we will see for the time being because it is limited to the steel and aluminium for the time being.

Sputnik: Of course, the fallout from all of this, from all the tit-for-tat measures, and the full out trade war, if it happens, will hit consumers, in what countries are they most likely to be hit the hardest?

Raoul Leering: It depends at what products you're looking at. If you are looking at what region, if you're looking at the EU, for starters, the biggest producers and exporters of steel to the US are to be found in countries like Germany, the Netherlands and Italy, but if you look at what it means for total exports then there are other countries that are hurt to a larger extent, and Greece is one of the examples.

So it depends on whether you look at the total value, or whether you look at the importance of that sector for the economy of the given country within the EU. Now the other way around, the damage for Americans will on the one hand be, for example, bourbon whisky, which exports are not that much to other countries, but 40% of the export goes to the EU, so that's on top of the list of products that will be relatively hurt most and a few of the other products are to be found in cosmetics, motorcycles like Harley Davidson and the like.

Sputnik: How is Europe going to be able to compensate for the losses? And how fast will it be able to do this?

Raoul Leering: I think that this depends on how long this is going to continue. As Wilbur Ross, the US Commerce Secretary, has put forward the fact that tariffs are now in force doesn't mean there can be no negotiations continued. So what they've been doing with China is also the objective of the policy towards the EU, it's put the tariffs up and keep the pressure on the trade partners to try and get some concessions from those trade partners in the months after the start of the tariffs.

So it depends whether the EU is prepared to give in or whether they are going to continue with their principal stance and if that would be the case, I would not be surprised if Donald Trump would also put a tax of 25% on the imports of European cars and then we're talking of more significant effects on the European economy, about 0.1% point for GDP and almost 1% of exports, and if that tit-for-tat goes on, things can get pretty nasty.

Sputnik: Of course, countries of the EU will be looking at other options and we've already been hearing calls for lifting the anti-Russian sanctions, the Austrian vice-chancellor again reiterated the need to lift anti-Russian sanctions, how likely could this happen amid this trade row with the US? And would the EU be able to sustain both the US tariffs and sanctions on Russia, economically?

Raoul Leering: It's very hard to predict anything towards that point, whether there will be a link with lifting the sanctions imposed on Russia or not. I think for the time being there are no real serious signals in that direction, and I don't really have a strong opinion whether that's going to happen or not.

The views and opinions expressed by Raoul Leering are those of the speaker and do not necessarily reflect those of Sputnik.