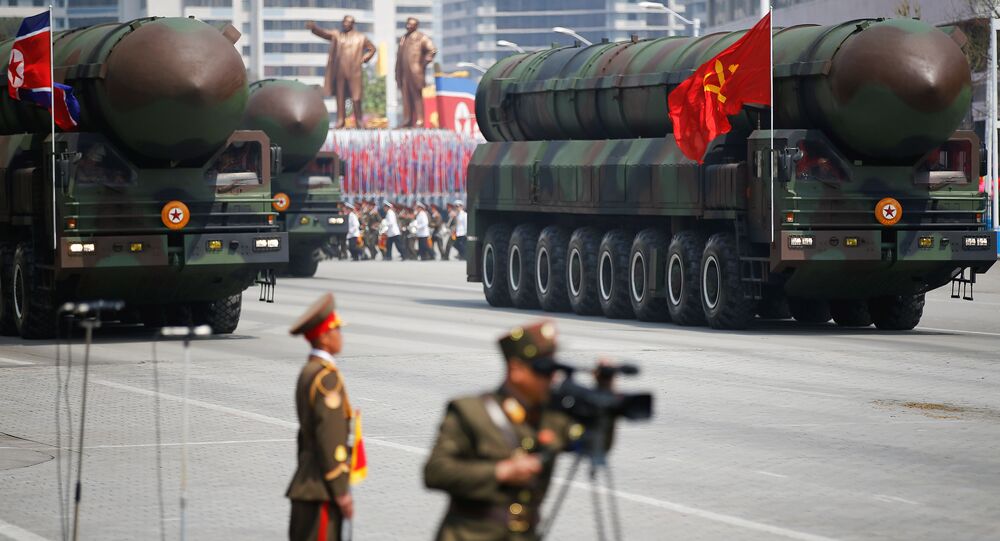 DPRK 'Won't Give Up Nukes Given Libyan, Iranian Experiences' – Fmr US Diplomat

North and South Korea have agreed to hold high-level military talks later this month amid preparations for a summit between President Trump and North Korean leader Kim Jong-un in Singapore. Speaking to Sputnik, former State Department diplomat and writer Michael Springmann outlined what the world should expect from the talks.

Sputnik: High level officials of the two Koreas are expected to meet on a number of occasions in the coming months, with one of the meetings focusing on military issues. What is your take on this slew of inter-Korean activity and negotiations, all ahead of the potential momentous Kim-Trump talks?

© CC0
Singapore Working Hard to Ensure Kim-Trump Meeting Goes Without Problems - Defense Minister
Sputnik: How likely are the representatives of the two Koreas to meet, bearing in mind that they did earlier cancel their talks?

Michael Springmann: They canceled them and then apparently from what I've seen had meetings on Saturday, the 26th of May in the demilitarized zone. I think a lot of the issue about whether the two Koreas will meet sometimes comes from the United States, with pressure on one side to accede to its will rather than the inter-Korean will.

Sputnik: President Trump has reportedly said that he does not want President Moon or Prime Minister Abe to be present at his expected talks with Mr. Kim. Why do you think he prefers to act alone in this matter?

Michael Springmann: I think there are a couple of reasons. One of course is that President Trump is widely seen by some people as a narcissist who believes the world revolves around him, and wants complete control of everything surrounding him. So I think he wants to keep as many people out of the final decisions as possible.

© AFP 2021 / JUNG YEON-JE
Japan Defense Chief Warns Against Rewarding North Korea for Willingness to Talk
On the one hand though, I can see keeping Abe out, because he's a hardline right-winger who is desperate to thwart North Korea having nuclear weapons. But I think that President Moon of South Korea ought to be in, because the negotiations really affect both Koread; it affects the entire peninsula and the entire population of the peninsula. So I think Moon should be there and I think it's a mistake to exclude him.

Sputnik: In the meantime there's news of F-22 fighter jets temporarily deployed to an airbase in Japan's Okinawa. What would be the reason behind this move? Could it create a certain tension ahead of the potential talks?

Michael Springmann: I think it does. I think the reasons behind  the move are remarkably obscure and strange. Granted they've rotated F-22s from a base in Alaska to Kadena, Okinawa several times in the past. But at this point, just before the talks, I find it really peculiar, because the talks are supposed to be in Singapore, which is something like nearly 4,000 km or nearly 2,300 miles from Okinawa.

I can't figure out what they're there for. I can't see anybody wanting to attack the flight that the North Korean leader Kim Jong-un will take…

© REUTERS / Yuri Gripas
US Troops in South Korea Off Table at Trump-Kim Summit - Pentagon Chief Mattis
So I think this is really peculiar, because Kadena airbase is the largest American Air Force base in the Pacific Ocean. I don't know whether you want to think that they're there to perhaps shoot down Kim's plane and then claim that someone else did it or more fancifully do it directly and say he was attacking them. I don’t know, but I don't see any real good reasons to move more warplanes into the area.

Sputnik: Japanese and US defense officials have agreed to maintain pressure and sanctions on North Korea in a bid to make it abandon its nuclear capabilities. How achievable is this aim?

Michael Springmann: I don't think it's very practical or achievable. I think the North Korean leadership knows all about what happened to Libya when Muammar Gaddafi gave up his plans for any kind of nuclear weapons and he and his country were destroyed. The North Koreans see the enormous pressure being placed on Iran by previous American administrations and that of President Trump. They don't [even] have nuclear weapons and yet they're being pressured to give up any possibility of ever achieving anything significant in the way of nuclear power in the country.

© AP Photo / Evan Vucci
Trump Confirms Summit With North Korea's Kim Jong Un on June 12 in Singapore, Says Pyongyang Wants Denuclearization
So I think the North Koreans can read the tea leaves, and may possibly give up a couple of their weapons and missiles. But I don't think they're going to abandon anything, because they've got the world's attention and they've got themselves security in knowing that if they are attacked they can fire back a missile tipped with a nuclear warhead anywhere in the region. I think it's fanciful; I think the US has got to guarantee the North Koreans something besides threats and destruction of their country if they don't give up their atomic bombs.

Michael Springmann served in the United States Department of Commerce and as a diplomat with the State Department's Foreign Service, and went on to become a whistleblower, writer and independent political analyst. The views and opinions expressed by Mr. Springmann are those of the speaker, and do not necessarily reflect those of Sputnik.