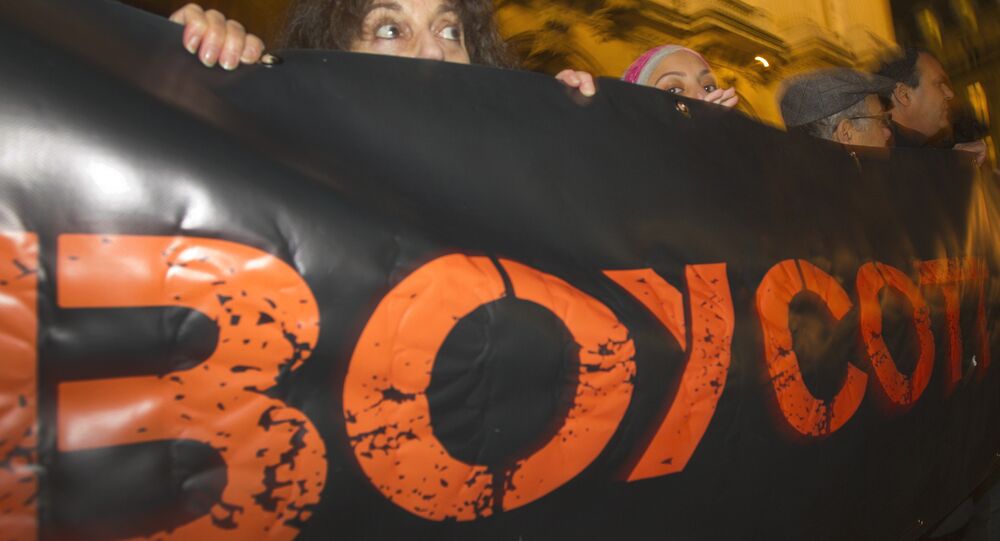 A German party, the Third Way, has been labeled as anti-Semitic and accused of presenting a security threat in a newly released report by a German intelligence agency. According to the report, the party, linked to the pro-Palestinian BDS* movement, has denounced Israel as a terrorist state and calls for a boycott on Israeli products.

Sputnik discussed the significance of this with Dan Diker, fellow and project director of The program on BDS and Political Warfare.

Sputnik: What is the significance of the fact the German homeland security service has labeled the Boycott, Divestment, Sanctions (BDS) movement-linked party as anti-Semitic?

Dan Diker: It's the first time that any internal security service in the world has labeled BDS a national security challenge or problem, or threat. The security services are very right to identify that BDS and their associated political warfare strategy as a national threat to the Republic of Germany as well as to other Europeans, and the reason is that the German authorities have discovered a direct connection between very clear anti-Semitic statements by what they call the 'red-green alliance'.

The authorities have noticed this connection to what had been Nazi talk back in 1933 and I think this is the fright of the German authorities because it really reminds them of a very dark time in German history, where it began with ideological warfare and ended up with the Holocaust.

Sputnik: Is going to have far-reaching consequences for politicians, for entities that are dealing with BDS?

Dan Diker: Clearly there are economic implications, mostly what we're seeing in Germany is they are leading the rest of Europe, but seeing that they're not prepared to make available facilities for BDS activities, but let's remember the threat of BDS is not the economic impact, it's the political warfare characteristic of BDS, that means in short, when far-left German groups, for example, have known to be directly in contact with and supportive of the Lebanese based Hezbollah and the Hamas, this is what the real danger of terrorism is, that begins with BDS and ends up with terror and I think that is what many in the West are beginning to see right now.

The students at the University of Heidelberg took a recent decision to prohibit any type of BDS legislation and I think that the American universities would do very well to pay attention to the type of coordinated action and morally clear action that these universities in Germany have taken.

Sputnik: In other words from say a moral issue it becomes actually a direct security threat?

© AFP 2019 / ODD ANDERSEN
'Incredible Solidarity': UK Muslim Group Slams Anti-Semitism in Full-Page Ad
Dan Diker: It is a direct security threat, and I thank you for asking that question. What begins with this type of idealogical hatred that is completely in line with types of statements that we hear out of Hezbollah, ISIS, Hamas and other radical Islamic organizations will end up killing Europeans although it starts with Israel, and I think that Germany is seeing the hidden evil hand behind all of this and many become tricked, and deceived, and manipulated into thinking that because it starts with three letters — BDS — it means it's not dangerous, but as you said in your question, it is a security threat that would end up boomeranging on European host countries in which there are many, many Islamists, more than 20-25 million that are making their home on the European continent and share the exact same ideology as the Hamas, Hezbollah and ISIS.

I think that is something that the European governments ought to pay attention to, and I think that's exactly to what the German internal security services are signaling with their outlawing of BDS.

Sputnik: Anti-Semitism, of course, is such a sensitive issue in Germany, why do this sentiment still exists in the country? What factors actually contribute to the fact that its lingering presence there?

Clearly Israel is a strong nation-state with a very robust people that come from a hundred different countries, including Germany, and other European countries and from Asia, so Israel can defend itself, but one sees a tremendous amount of increase in this traditional anti-Semitic behavior were Israel is being held to a double standard that other countries are not held to, and that is one of the definitions of anti-Semitism.

© AP Photo / John MacDougall/Pool
'Berlin Wears a Kippa' Rally Against Anti-Semitism Stopped Amid Threats
One cannot understand if one looks subjectively what the source of the hatred is, Israel has taken the leading role in helping other countries around the world with water, with agriculture, with healthcare, with weapons and military defense, and one really wonders, Israel which is a multicultural democracy that has a Jewish character but has robust Muslim, Christian minorities that are protected completely by law, why this anti-Semitism, anti-Israelism, this Jew hatred in the form of anti-Israelism is peeking actually these days, it is something, certainly, that Israel and the Israeli government is very concerned about, the Israeli people are very aware of, and in Israel they always say: "Never again!"

The German people and the German government are among the best friends that Israel has, Israeli people have a deep appreciation for the German people at this time especially in guarding against the possibilities of a downward spiral into the type of terrible tragedy that overtook the world 70 years ago.

Sputnik: And yet there are countries within the European Union that do not denounce the BDS movement as anti-Semitic, why would the issue be so divisive?

© REUTERS / Axel Schmidt/Pool
German Music Award Abolished Over Anti-Semitism Dispute - Reports
There is a certain degree of fear by the European governments at the fast growing number of Muslim immigrants coming from Arab countries such as Syria into their borders and while there are many good and fine people in those refugee communities there's also a number of people who are not fine and good, and certainly are culturally threatening the European character, and also have had violent backgrounds and connections to terror groups, they've received money from some of these Islamist groups, and Germany also has experienced in the last three years a number of serious radical Islamic terror attacks, that give the German authorities reason for pause.

When you put all of these things together, you find a certain sensitivity in Germany that does not yet exist in some of the other countries, and I think that they ought to rethink or think clearly about the type of violent ideological expressions that they allow to take place in their cities.

*BDS — A Palestinian-led movement for the Boycott, Divestment, Sanctions movement works to end international support for Israel's oppression of Palestinians and pressure Israel to comply with international law.