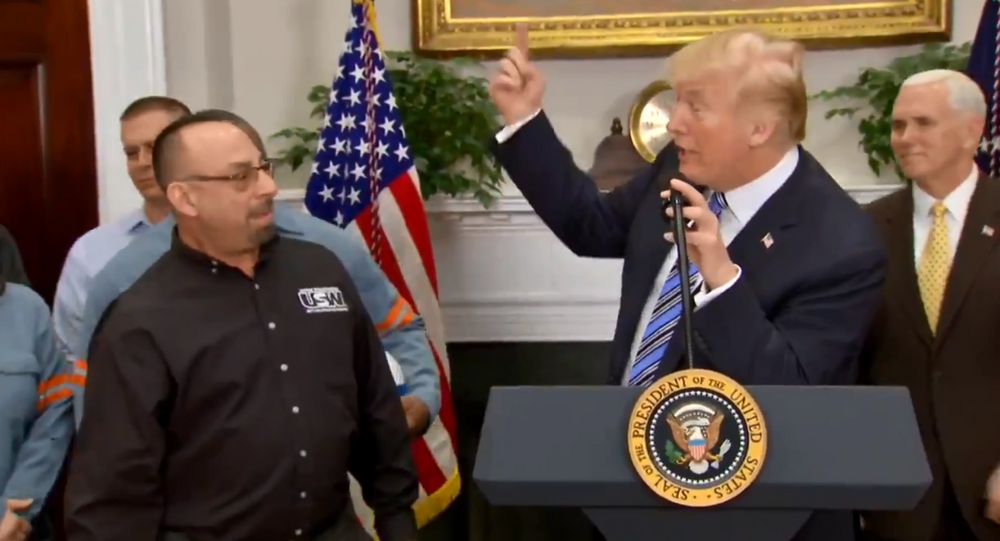 The Trump administration has hit steel and aluminum producers from Europe, Canada and Mexico with tariffs, thereby prompting countermeasures from the Canadian government. Walid Hejazi, an associate professor of economic analysis and policy and academic director at the Rotman School of Management, Canada, has offered his take on the issue.

Sputnik: I remember several guests joining us here at Radio Sputnik some time ago and when all of this initially hit the news and they were saying: "No, no no, it won’t go so far as to become an all-out trade war," but it looks like it could get there.

Walid Hejazi: Indeed, when you have rational actors, the idea be that trade is good for the global economy; and one thing about economists: economists can almost never agree on anything, but one thing they all agree on is the benefits of open and free trade.

Sputnik: Is this just a case of shortsightedness? Is this the Trump administration not looking beyond just the immediate profit it could get?

Walid Hejazi: I actually think it’s more fundamental than that. I believe that Donald Trump is in hold of his supporters, his whole mantra of "Make America Great Again." They still believe that entire global economy cannot move forward without the United States at the center. That’s the belief. So the argument they have is: "You need the United States in order to be prosperous." And that’s old thinking: the global economy has changed dramatically, with the rise of Asia, with the rise of the BRICS countries – Brazil, Russia, India and China.

What this is showing is that – "Well, you know, the United States, if you want to play a hard ball, we are not going to give you whatever you want in order for us to have access to the US market, because you need access to Europe, you need access to Canada and Mexico.  It’s a two-way street." So I think that this old thinking on the part of Trump and his advisers is very misguided and it’s dangerous.

Sputnik: Justin Trudeau of course immediately announced countermeasures: How efficient could they be? Could they in some measure contain the US trade war ambitions?

Walid Hejazi: Absolutely. As an academic [in the Cabinet], I give the Canadian government incredible credit for the approach, as well as the Europeans. When you have strategic trade policy, the idea, for example: The Canadians and the Europeans can put tariffs on goods coming from the US, including things like Harley Davidson motorcycles, bourbon and orange juice.

Why did they choose these strategic products? Because the Canadians and the Europeans are looking at swing states in the United States. And by putting tariffs, for example, on the imports of orange juice or oranges from Florida into Canada or Europe, the economy in Florida will suffer.

And with the midterm elections coming up in November, all of the Republican candidates in these swing states are going to be negatively affected. So how can this response be effective? It’s going to really hurt the Republican Party in the mid-term elections. And as long as Democrats are elected that will take away the ability of Donald Trump to implement policy.

Trump Hits "Allies" With Stiff Tariffs: The Politics Behind a Trade War