Washington's abrupt change of heart regarding the US-Chinese trade dispute could have been triggered by a number of reasons, analysts told Sputnik, citing the US’s fading economic growth and the substantial pressure on President Donald Trump inside the US as some of the apparent causes.

Donald Trump's recent flip-flops on US-Chinese trade relations reflects the nervousness and anxiety of Washington over the fall of the country's real economy and production, which makes the US "a colossus with feet of clay," says Bian Yongzu, a researcher with the Chongyang Institute for Financial Studies at the People's University of China.

"The fact that Trump quickly changed the previous decision is, among other things, a sort of tactic aimed at solving the US-China trade dispute," the researcher presumed in an interview with Sputnik China. "It is known that during Vice Premier of the State Council of the People's Republic of China Liu He's visit to Washington [on May 17-19] the parties reached only a general agreement. US Secretary of Commerce [Wilbur] Ross will come to Beijing this week on Saturday [June 2] for consultations on specific sensitive issues."

The Chinese scholar presumed that the parties would hold detailed conversation during the upcoming talks.

According to Bian, the pressure recently exerted by Washington on Beijing has sent a signal to Ross to adopt a tougher position in negotiations with the Chinese side.

"Of course, it does more damage than good to the US-Chinese negotiations," he emphasized. "It could only complicate the situation and have a negative impact on the atmosphere [of the talks]." 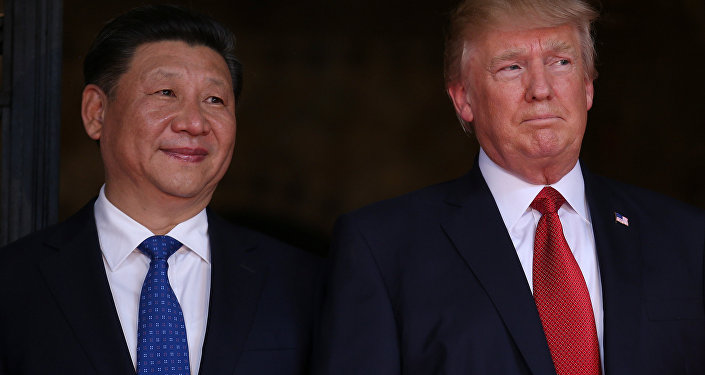 © REUTERS / Carlos Barria
To be Continued? China Wins First Round of Tariff War, Trump Not Satisfied
While the US's economic strength is waning, Washington is unlikely to seek out reasons for this situation in its policies, but try to pin the blame on others, the scholar opined.

Following the release of the US-China joint statement on a "truce" in a "tariff war" on May 19, Washington unexpectedly announced a series of new measures against China on May 29.

The announcement revealed that on May 22, Trump signed a memorandum against "discriminatory and burdensome trade practices by China" as part of a White House effort to "protect domestic technology and intellectual property."

Furthermore, the statement said that "the United States will impose a 25 percent tariff on $50 billion of goods imported from China containing industrially significant technology, including those related to the 'Made in China 2025' program," adding that the final list of the goods would be published on June 15 and "tariffs will be imposed on those imports shortly thereafter."

Li Kai, a researcher at the Shanxi University of Finance and Economics (SXUFE) believes that "the fact that the US can easily change its decisions can be explained by the following reasons: First, the US hopes to achieve its strategic goals in the negotiations."

© AP Photo / Cliff Owen
'Biggest Long-Term Challenge' in Asia is China, not DPRK – US Korea Envoy Pick
According to Li there are two of them: one is to reduce the huge deficit in US-China trade and another is to restrain the development of the "Made in China 2025" program.

The scholar pointed out that China had already made steps to tackle the problem of the trade deficit. At the same time, he admitted that Beijing is not interested in backpedaling on its Made in China 2025 initiative.

"China will never agree to this," Li highlighted. "Therefore, after the publication of the joint statement [on May 19], and despite the temporary cessation of the trade war, there has been a pressure on Trump in the US. Based on their sense of superiority, Americans believe that the US should derive maximum benefit from negotiations with China and achieve its own goals to the detriment of China. This will not happen, but this is one of the reasons why the US has reconsidered its approach to the introduction of tariffs on Chinese imports."

For his part, Alexander Larin, a leading researcher at the Institute of Far Eastern Studies of the Russian Academy of Sciences, does not exclude that the two countries are conducting behind-the-scenes negotiations, which could lead to sudden announcements on the part of Washington.

"Probably, various [US] political forces are trying to influence Trump," Larin suggested. "Perhaps this explains why the US reacts to the negotiations with China — in which it still cannot achieve its goals — so impulsively. As a result, it could aggravate general contradictions. The Chinese side's effort to turn the trade dispute into a peaceful settlement does not meet an adequate response from the US."

© CC BY-SA 2.0 / 대한민국 국군 Republic of Korea Armed Forces / Navy Rim of the Pacific Exercise
US's New 'Indo-Pacific Command' Aimed at Challenging Beijing Amid South China Sea Tensions - Prof
The Russian academic has envisioned that tensions between the US and China will be aggravated even further. According to Larin, it could be explained by Trump's overall strategy that has already led to the escalation of contradictions between Washington on the one side and China, Russia and the European Union on the other.

"In fact, because of this, turbulence becomes a global phenomenon," the academic remarked.

Beijing's official reaction to the White House's May 29 statement was not long in coming. A representative of the Ministry of Commerce of the PRC stated that the announcement clearly contradicts the recent bilateral consensus reached between China and the US in Washington.

"We urge the United States to keep its promise, and meet China halfway in the spirit of the joint statement," Chinese Foreign Ministry spokeswoman Hua Chunying said, adding that Beijing is ready to take "resolute and forceful" measures to protect itself.

EU Commissioner: EU Decided to Launch Legal Proceedings in WTO Against US, China

'Biggest Long-Term Challenge' in Asia is China, not DPRK – US Korea Envoy Pick