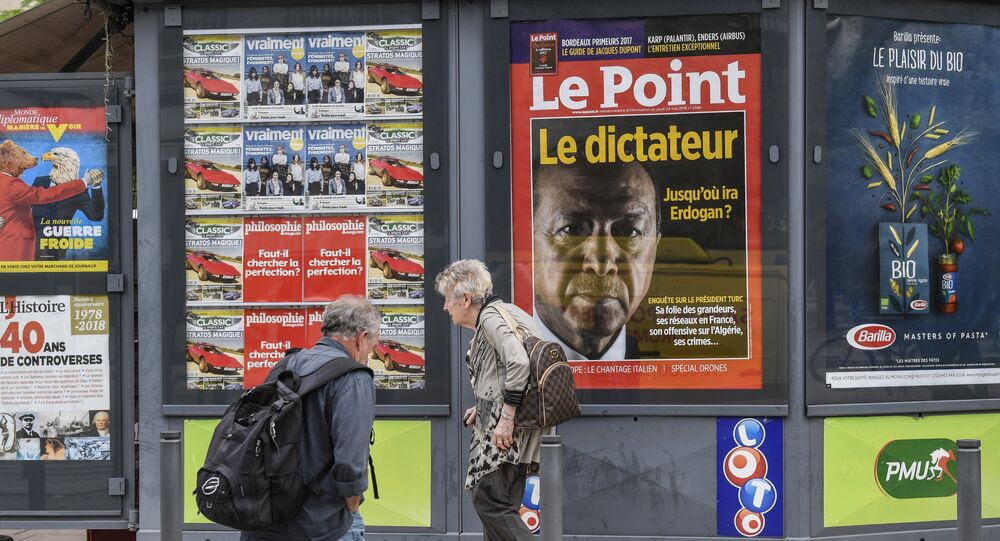 According to him, Le Point calling Recep Tayyip Erdogan "the dictator" is an "extremely offensive and unacceptable verbal attack against the Turkish President, which can be seen as an insult to Turkey as a whole."

READ MORE: 'NATO Member is at War With Another One' — Analyst on Turkey-France Relations

"Macron is extremely concerned about Turkey's advance in the Balkans and its rapprochement with Russia. He even stated that he was ready to support Greece in the event of a military action against Turkey. Let me remind you that in one of his previous interviews with Le Point magazine, Macron complained about the 'compulsory necessity of regularly contacting Erdogan'," Sait noted.

He suggested that "France is dissatisfied with the strengthening of Turkey's position in the region, especially an agreement on the purchase of Russia's S-400 missile systems."

READ MORE: France Sends Special Forces to US Base in Syria — Reports

"With time ticking until the June 24 elections in Turkey, French authorities began using various ways to tarnish Turkey's [political] image. But such attacks will not have the expected impact on Turkish voters," Sait emphasized.

"Additionally, in an effort to compete with Germany within the EU, France has intensified its interaction with Washington. Currently, France and the US are jointly operating in the Eastern Mediterranean and Syria, something Turkey is opposing. For this reason, we have repeatedly seen steps by France which are directly out of line with Turkey's interests and national security," Bozkurt underlined.

He added that "the most striking example of this is France's support for the Kurdish Democratic Union Party [blacklisted by Ankara as a terrorist organization], which actually means that Paris support the idea of dismembering Syria."

"In the Eastern Mediterranean, France also conducts anti-Turkish policy, supporting Cyprus' EU membership and rendering military support to Cyprus. And now France again stands on the side of the front headed by the United States," Bozkurt concluded.

© AP Photo / Bertrand Combaldieu
Macron Demands Release of French Journalist Detained in Turkey During Talks With Erdogan
Earlier this week, President Macron branded the actions of supporters of Turkey's ruling Justice and Development Party "unacceptable," after they were tearing down Le Point advertisements to protest the magazine's article about Turkish President Erdogan.

Macron tweeted that "you cannot put a price on freedom of the press; without it, it's dictatorship."

Slamming Macron's comment on the actions of AKP supporters, Turkish Foreign Minister Mevlut Cavusoglu said in turn that democracy is not only about "insults, curses and lies by one side," but also about taking into account the "sensitivities of the other."

In the article, entitled "The Dictator. How far will Erdogan go?" Le Point asked the rhetorical question whether the Turkish President is "a new Hitler."

Around 15,000 Rally in France Demanding Release of PKK Leader by Ankara