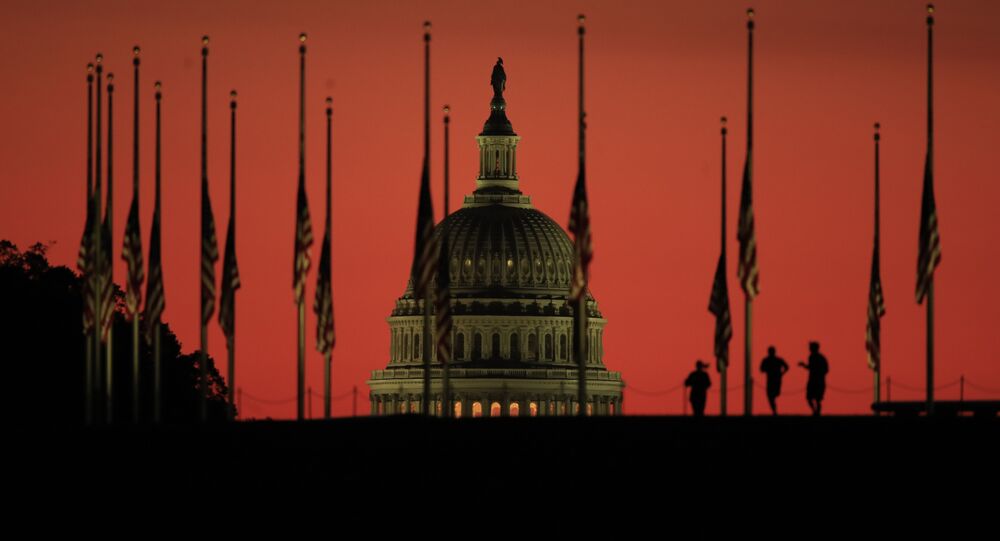 Many Americans know very little about the nearly 400 think tanks occupying space in the nation’s capital. Investigative journalist and senior editor of the Grayzone Project Max Blumenthal joins Loud & Clear on Radio Sputnik to pull back the veil on the organizations shaping the narrative inside the Beltway.

https://www.spreaker.com/user/radiosputnik/americas-think-tank-military-industrial-_1
"Think tanks have basically become kind of a money dump for foreign countries, arms manufacturers and corporations who are seeking to buy influence in Washington. And what they can do is not only install fellows, senior fellows and researchers who will push their line and do policy research that advances their imperatives — whether it's Saudi Arabia, Qatar, Turkey, pro-Israel interests or Lockheed Martin, BAE Systems, the British arms manufacturer, or Chevron," Blumenthal told Loud & Clear hosts John Kiriakou and Brian Becker.
© Sputnik / Natalia Seliverstova
Moscow Slams Atlantic Council's Report as 'Attempt to Add Fuel' to Syrian War

According to the Brookings Institution, who receives most of its money from a handful of billionaires and the Persian Gulf state of Qatar, there are 393 think tanks in Washington, DC, and an additional 149 in the neighboring states of Virginia and Maryland, as of 2009. That number has likely grown since then, as America has opened new theaters of conflict across the Middle East and North Africa.

"I say they're all tank and no think," Blumenthal quipped.

"These are the funders of these gigantic institutions," Blumenthal said of the oil and arms giants and foreign governments bankrolling DC's marketplace of ideas. "And when I say gigantic, I mean in a physical sense. You look at the Brookings Institution, you look at The Atlantic Council, which occupies several floors of a building on K Street. You look at the New America Foundation, which has this gigantic office a block from the White House, and you have to wonder how they pay for that. I mean the rent and leasing in Washington is enormously expensive and you look at their funders and it's just a who's-who of the arms industry, gulf states, and supposed US allies, who in many cases are pushing permanent war or are responsible for some of the worst humanitarian catastrophes in the world," Blumenthal said.

© Sputnik
Neocon Think Tanks Not Russian Media Are the Enemy Within

The think tanks help shape US foreign policy and the national consensus around it through a shadowy web of "experts" who are cited across the mainstream media as independent analysts, despite their questionably independent revenue streams.

For the layman to actually get a sense of how the sausage is made, "You have to RSVP," Blumenthal told Loud & Clear. But even then, citizens who question the establishment may be barred from such private events. "Last week, the Foundation for the Defense of Democracies, which is backed by the pro-Israel interests and Saudi Arabia, UAE and the arms industry, refused to allow me into a briefing they were holding, or discussion they were holding on elections in Lebanon and Iraq. They just simply refused to have me in there, because I'm Max Blumenthal, I guess."

Blumenthal further emphasized how the public is locked-out of the discussion. "Even outsider journalists are often not allowed into these events. But if you do attend them, you're going to see everything wrong with American foreign policy. It really is distilled perfectly into the think tank world."

US Expands Sphere of Influence Through EU and Atlantic Council