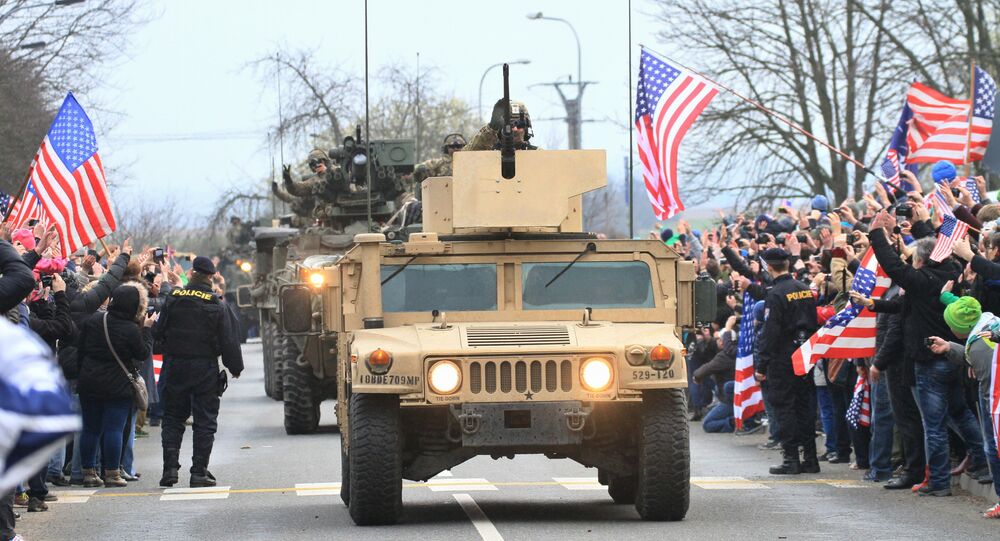 Commenting on a US military contingent's ongoing deployment to the upcoming Saber Strike war games in Estonia via Czech territory, Martin Zapletal, a Czech activist, told Sputnik that he would continue to protest Prague's policy of promoting US interests.

Czech activist Martin Zapletal said that when it comes to the US's participation in the Saber Strike drills, the Czech Republic is in a situation where "we need to express ourselves and protest in a peaceful, non-violent form."

"The United States' policy does not change and they have been pursuing the same political course for several years. Their policy jeopardizes the security of not only of Europe, Russia and the whole world, but my country's security as well," Zapletal stressed.

According to him, "the very movement of [US] troops is unsafe from the psychological point of view."

"In my opinion, the purpose of this event is to make us get used to re-deployment of troops and see the friendly US military, which is trying to build up American democracy, the consequences of which we have seen for several decades across the world," Zapletal pointed out.

Describing NATO as "just an instrument of US policy," he pledged to stage more protests against the Czech government's drive "to support US policy and promote their interests."

Zapletal also rejected allegations about Moscow sponsoring his activity and said that those in the Czech Republic who oppose the policies of the US and the EU are immediately portrayed as Nazis, racists and xenophobes.

"I cannot tolerate it. … We, Czechs, should live in a sovereign state and cooperate with all the countries," he concluded.

In June 2016, a veteran of the Czech Armed Forces, Lieutenant Martin Zapletal, was detained by police and charged with organizing mass disturbances after he took off his pants and tried to block US military vehicles passing through the streets of the Czech city of Viskovo. Speaking to Sputnik, he explained that his actions were "of political nature" and that he sees all this as a provocation against Russia, aimed at fueling the conflict."

A US convoy of about 400 armored vehicles and 1,000 servicemen is due to cross Czech territory and arrive in Estonia to take part in the Saber Strike drills, which will be held in Poland and the Baltic States between June 3 and June 15.

The exercises are touted by NATO as the alliance's resolve to defend its eastern member states, which will drill elements of mutual interaction between army units during the forthcoming war games.

© REUTERS / Kacper Pempel
How NATO Uses "the Russian Scare" to Justify Alliance's Eastward Expansion
Separately, the US will deliver a total of 3,300 personnel and 2,500 pieces of equipment, including 87 Abrams tanks and 18 Paladin howitzers, to Estonia, Latvia and Lithuania, as well as Poland, Romania, Bulgaria and Hungary as part of Operation Atlantic Resolve.

The purpose is to increase NATO's military buildup in Eastern Europe and the Baltic States amid the ongoing Ukrainian crisis, with Western countries using alleged Russian interference in Ukrainian affairs as a pretext.

Russia has repeatedly expressed its protest against NATO's eastern expansion, saying that it will undermine regional stability and result in new tensions.

The views and opinions expressed by Martin Zapletal are those of the analyst and do not necessarily reflect those of Sputnik.