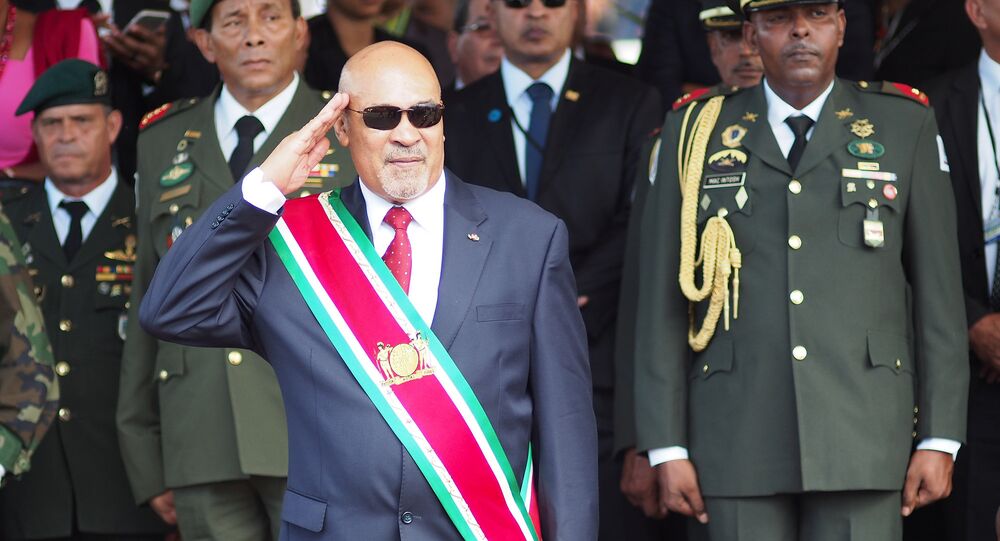 'He Will Probably Never Go to Jail': Why Surinamese President May Escape Justice

The President of Suriname, Desi Bouterse, is on trial in the former Dutch colony for a series of political murders dating from 1982. Sputnik spoke to John Gimlette, an author who has written a book about Suriname, about the chances of Bouterse ever going to jail.

Bouterse, a former Surinamese army sergeant, has also been convicted of drug smuggling in the Netherlands and the Dutch government has cancelled all but essential aid to the impoverished nation on South America's Caribbean coast but he remains popular in Suriname.

"He is populist and tells people what they want to hear. A lot of people wear Desi for Presi t-shirts," Mr. Gimlette told Sputnik.

#Onthisday 1980: In Surinam, prime minister Henck Arron is deposed in a military coup and replaced by a military dictatorship led by Dési Bouterse. pic.twitter.com/vHuzRrbTl1

Dutch remains the language of Suriname and the crime at the heart of the case is known as the "Decembermoorden" (December Murders).

Bouterse and 15 other army officers had ousted a democratic government in 1980 — accusing it of corruption — during what was known as the "sergeants' coup".

© REUTERS / Ranu Abhelakh
Supporters of Suriname's President Desi Bouterse, who chairs the ruling National Democratic Party (NDP), attend his final campaign rally ahead of the May 25th parliamentary elections, at the party headquarters in Paramaribo, May 23, 2015

Over the next two years they claimed down on political opponents and on December 8, 1982 they rounded up 15 Surinamese journalists, lawyers and academics in Fort Zeelandia, an old Dutch fort in the capital, Paramaribo.

They were gunned down by a soldier with a machine gun perched in a window overlooking the bastion where they were being kept.

5 more years! Neks noh fout! Still going strong. Who is with me..

"The fort is in the center of Paramaribo and it's very pretty and made of brick. It looks like something from Amsterdam or Delft. There are two bastions facing the river and the murders took place in the left-hand one. Nowadays it is a tourist destination but there are lots of bulletholes in the walls," Mr. Gimlette told Sputnik.

"The Dutch police investigated the murders and they drilled out the bullets and did tests to find out the elevation of the shots. They decided they were fired from an upper window using a machine gun," he told Sputnik.

"It's quite chilling to go there. The bulletholes are so lurid and dramatic. You can see the cells where they were kept and candles burn in those cells in memory of those who died. They are lit by opponents of Desi," Mr. Gimlette told Sputnik.

'Desi Calls Himself A Marxist'

"Desi calls himself a Marxist but all politicians in Suriname use that term. They are not Marxists in the way we'd understand it," Mr. Gimlette told Sputnik.

Bouterse, who is now 72, came to power during the last decade of the Cold War but Mr. Gimlette said he was of little interest to Moscow.

"But there was a crazy plan by someone at the CIA to invade Suriname. It was just a stupid idea. They were going to use South Korean troops to do it so that the US would not be implicated. It never got off the drawing board," Mr. Gimlette told Sputnik.

#SURINAME: President Desi Bouterse is to visit Brazil in March and, before the summer monsoon starts up, he will tour India, Morocco, and the United Arab Emirates (UAE). He will also visit Russia and Serbia later this year. pic.twitter.com/iMbNmpiqt7

The trial heard an affidavit from Fred Derby, a trade unionist who was the only survivor of the massacre.

In June last year a prosecutor recommended Bouterse be sentenced to 20 years in jail for the murders.

"As military leader, he was not only present during the summary executions, he also decided the fate of the victims. He behaved like a judge, and robbed his victims of their most valuable possession, their life," prosecutor Roy Elgin told the court.

"We are, of course, very happy the prosecutor has debunked all the stories of Bouterse, who has always persisted he is innocent. We expect nothing but Bouterse actually getting convicted for a 20-year prison sentence, in a few months from now," Hugo Essed, a lawyer for relatives of the victims, said in June 2017.

Maroons in the Jungles of Suriname during the interior war against Desi Bouterse. pic.twitter.com/PsmtTnc0iW

But the court has still not set a date for when it will make a final ruling.

"The trial is actually being held in his house, which was built at public expense. The trial is held there for his convenience," Mr. Gimlette told Sputnik.

Bouterse has previously accepted "political responsibility" for the killings but insisted he was not present and in 2012 the Surinamese parliament, packed with Bouterse allies, passed a law giving him and others an amnesty.

"He is probably never going to go to jail for it," Mr. Gimlette told Sputnik.

Bouterse was the military leader of Suriname until 1991 when democracy returned.

In the late 1980s he fought an insurgency by Maroons — the descendants of former slaves — led by his former bodyguard, Ronnie Brunswijk, in the Surinamese interior.

But in 2010 he elected president and re-elected five years later.

Bouterse was convicted in absentia in the Netherlands for trafficking cocaine in 1999 but he cannot be extradited under Surinamese law.

Suriname — once known as Dutch Guiana — became independent in 1975. It is flanked by Guyana, a former British colony, and by French Guiana which remains part of France and is home to the Ariane rocket launching facility at Kourou.

The views and opinions expressed by John Gimlette are those of the expert and do not necessarily reflect those of Sputnik.

Armored fish and cowboy frog discovered in the tropics of Suriname