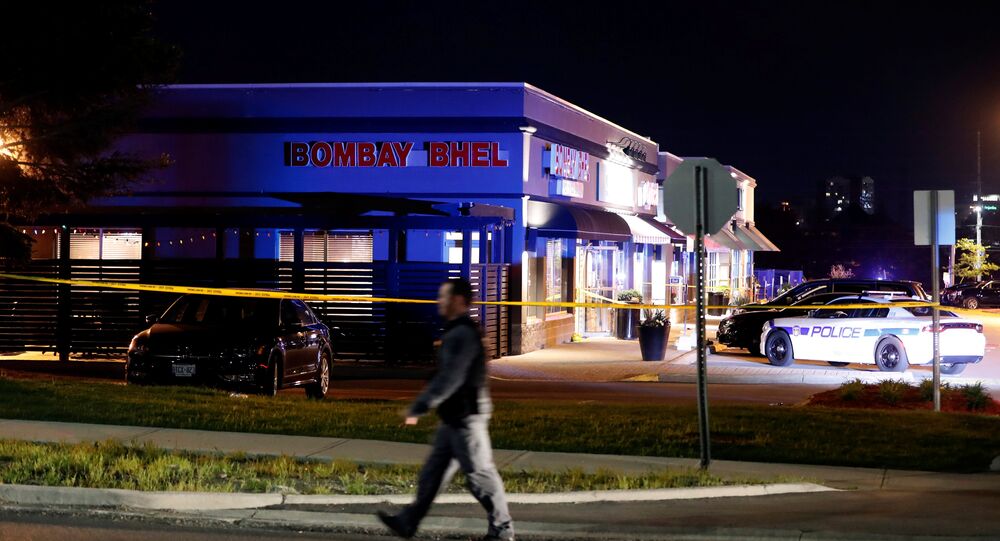 Canada's the Star news outlet has reported that speculation over possible motivations for last week's bomb blast at a popular Indian restaurant in the Canadian city of Mississauga has caused tensions to rise in the country's South Asian communities, going on to suggest a number of causes, from white supremacy to Islamic terror to Sikh nationalism.

Sputnik discussed the suspected terrorist attack in Canada with Dr. Lorne Dawson, co-chair of the Canadian Network for Research on Terrorism, Security and Society.

Sputnik: What prompted this particular attack in Canada in your view, because there has been speculation all over the Internet and the media for possible reasons?

Dr. Lorne Dawson: It’s definitely just speculation at this point, we have little or no accurate information, really, to determine if it’s a terrorist act at all and then what kind of  terrorist act it might be. We definitely need to know more about the identity of the attackers, and, of course, what possibly might be their motivation. In your lead-in peace all of those things are possible, it could be rooted in some kind of Sikh terrorism attack for Sikh independence, because that issue is still alive in the Sikh community in Canada. It could also be something connected with Islamic terrorism as well, or a reaction to immigration by some kind of white supremacist group. It is impossible to tell from the video available the identity of the attackers, their faces are so covered and there are no obvious markings on their clothing.

Sputnik: These types of events seldom happen in Canada, but this is the second one in just a month; is this just an unhappy coincidence or do you think it’s some kind of a pattern?

Dr. Lorne Dawson: No it's just an unhappy coincidence, what might be more interesting, although this is pure speculation too, but if it turns out that the attack on the restaurant is just a business dispute or a criminal matter, someone trying to put pressure on the restaurant owner over some kind of criminal activity, then the interesting aspect could be that we have two situations where the individuals are imitating techniques used by terrorists. In the case of the van attack on Young Street, there is no good reason to think it’s terrorism proper, probably just regrettably a disturbed individual, but it is interesting that he chose to emulate the kind of vehicular attack that ISIS has been calling for and that we’ve seen in London, Nice, Germany and elsewhere, so this creates a scenario of  people copying terrorists and that could pose a new kind of public safety risk.

Sputnik: Making it more difficult to investigate incidents like that.

Dr. Lorne Dawson: Definitely and certainly almost impossible to predict in any way, usually if it's a terrorist attack, we're talking about the restaurant attack, the terrorist, of course, wants publicity for their cause, and there’s usually some kind of announcement that would accompany the attack. In this case there’s been no kind of announcement, it is a curious factor. Canada has a very small number of terrorist plots and an even smaller number of terrorist attacks in Canada; we’ve been extremely fortunate, but Toronto is a major metropolitan center of 4 million in the greater Toronto area and it has one of the highest proportions of immigrants of any city in the world, with upwards of 50% of the population of the city having been born somewhere outside of Canada. There’s been a long-standing concern that disputes and struggles outside of Canada might find their way of migrating to communities in Canada, other than the Air India bombing by the Sikh separatist movement in 1985, we've been able to avoid that so far.

Dr. Lorne Dawson: Of course there is concern among some sections of the Canadian population about what is happening, but we have to realistically recognize that Canada, contrary to the popular opinion, really has one of the most restrictive, carefully managed immigration programs in the world, so that regrettably, to be honest, Canada for the most part is going after the highest level of people around the world, because you have to work through a point system and you basically have to demonstrate that you would be economically viable in Canada. Of course, we do have a reasonably liberal refugee policy, but these are still very small numbers overall, greater than in places like the United States, we're much more generous, but nowhere near places like Sweden and countries of that nature, and people get worried about those refugees, but the fact of the matter is we've never had an attack perpetrated by somebody who is a refugee to Canada.

Sputnik: And yet attacks like this could, of course, inspire people to start talking about the need to change Canada's open policy towards migration and taking a harder stance, like the US; do you see this happening?

Dr. Lorne Dawson: I can see a backlash element, because we have had a bit of a rising tide of anti-immigrant sentiment in certain parts of Canada; it's still quite a minority position, but it’s a position that didn’t even exist, let's say, 10 years ago. Especially in Quebec, where the French population of Quebec already feels that it’s a bit of pressured minority and then they become very concerned about other minorities entering into Quebec culture and diluting the French culture of Quebec. Less so in the rest of Canada and, of course, in places like Toronto the vast majority of citizens in Toronto are themselves immigrants, so it’s a different ball park in a large metropolis like Toronto.