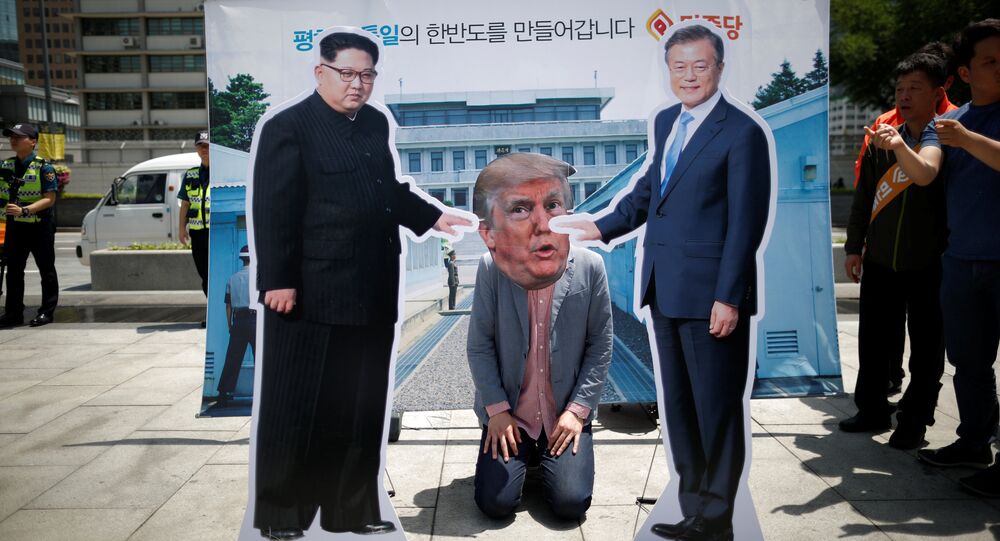 On Sunday, US President Donald Trump reaffirmed his commitment to meet North Korean leader Kim Jong-un in Singapore despite his announcement earlier in the week that the much-anticipated rendezvous was cancelled. Sputnik discussed the latest developments in US-North Korea relations with Jenny Town, the managing editor of monitoring group 38 North.

According to Jenny Town, Kim Jong-un’s reported second summit with his South Korean counterpart Moon Jae-in in the “truce village” of Panmunjom comes as a surprise amid uncertainty surrounding the Kim-Trump meeting.

While many speculate that the two heads of state might have discussed the possible encounter between the US president and the North Korean leader, Town said that “it’s hard to say what they talked about.” At the same time, she expressed some degree of certainty that the two had touched upon the issue, for instance the letter to Kim, posted on Trump’s Twitter, or how to put the US-North Korea summit back on track.

Sadly, I was forced to cancel the Summit Meeting in Singapore with Kim Jong Un. pic.twitter.com/rLwXxBxFKx

North Korea, in turn, reacted with a “very complimentary” tone to Trump’s response, praising his efforts, “unprecedented by any other president, to create a historic North Korea-US summit,” and expressed its willingness to proceed with talks “at any time.”

President Trump welcomed the “warm” statement from Pyongyang, having later announced over Twitter that the United States was involved in “very productive” negotiations with North Korea about resuming the summit.

We are having very productive talks with North Korea about reinstating the Summit which, if it does happen, will likely remain in Singapore on the same date, June 12th., and, if necessary, will be extended beyond that date.

When asked if the US president had made a “chess playing move” and if Kim’s statement had changed Trump’s view on the talks, Town said that the entire situation, including the Trump letter itself, cancelling the historic summit, came as a surprise, even though he had hinted that “it was possible to pull out of the meeting.”

“We’re not prepared for ups and downs of the diplomatic process, and that’s generally why you don’t do this type of diplomacy in the public. […] Everything is so public, and it’s become more about the show than more about the substance,” Town said.

The flurry around the Trump-Kim meeting has brought some positive changes to the images of both heads of state, which have come a long way from threats to exchanges of “warm and productive” statements.

“Trump really wants this [the meeting] to happen, because it would look very good to his base, and again it would be something no other president has done. But there’s a reason no other president has done it, and I think that part of the reason why it hasn’t happened in the past is because there are expectations that go along with a political benefit to North Korea,” Town said.

© AFP 2021 / Anthony Wallace
S Korean President: North Korea, US Need Direct Dialogue to Establish Peace
She added that if the meeting happens, diplomats will have to deal with the issue of what they are “accomplishing in the meeting,” and decide if they “really are going to have an outline of an agreement that will then get negotiated down and what that will do for North Korea’s nuclear status in that process.”

On Saturday, Reuters quoted Trump as saying that he was still “looking at June 12th summit in Singapore.”

“We’re doing very well in terms of the summit with North Korea. It’s moving along very nicely. So we’re looking at June 12th summit in Singapore. That hasn’t changes. So, we’ll see what happens,” Trump was quoted as saying at the White House.

Earlier in the day, Seoul’s presidential office said that Moon and Kim had met for the second time in the demilitarized zone, and the North Korean leader had reportedly expressed a “fixed will” to hold the summit between Pyongyang and Washington in Singapore, as well as his commitment to denuclearize the Korean Peninsula.