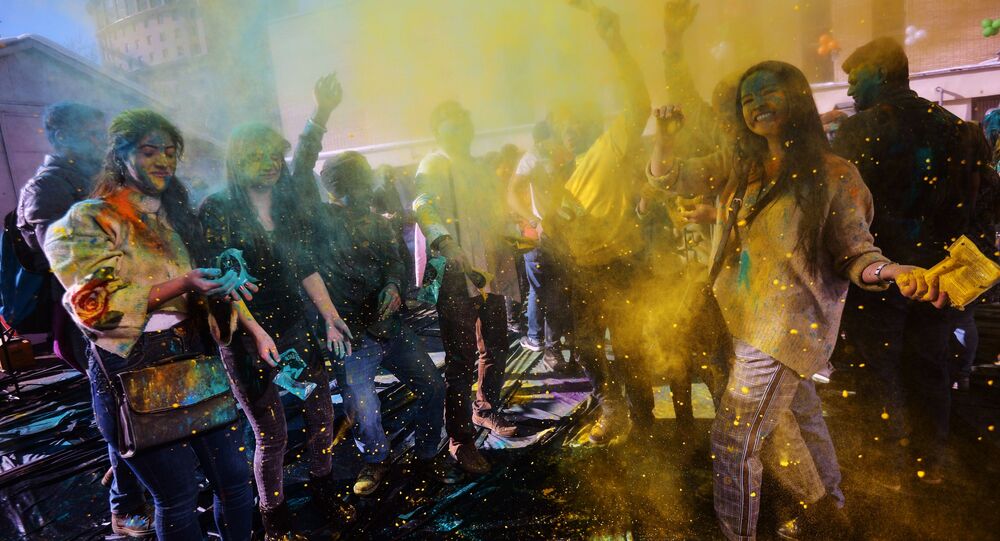 'Friendship Without Culture Not Correct': Sammy Kotwani on Russian-Indian Ties

On the sidelines of Russia's SPIEF in St. Petersburg, Sputnik spoke to Honorary President of the Indian Business Alliance Sammy Kotwani about cultural relations between the two countries and the upcoming cultural events in Russia.

Sputnik: What is your assessment of the current cultural relations between Russia and India?

Sammy Kotwani: We’re the oldest friends and friendship without culture is not correct. So, every year we celebrate four big events and this year there’re going to be five big events.

So it’s 9 days of international yoga in the Moscow park VDNKH Ostankino and there we’re talking about everything from all different types of yoga, inviting all the yoga centers in Moscow to come and inviting all the Moscow citizens, it’s free of charge. All of the Indian events are of no money because these are cultural events. So all the events are free of charge and inviting the whole of Moscow to come and join these events.

Sputnik: How difficult is it to organize an event like that and what can the Muscovites and guests of the Russian capital expect from this event? What are the highlights?

Sammy Kotwani: Every event is different. The highlight is, first of all my personal understanding is that it’s an event for all people, for babushkas [elderly women] and everyone who can’t afford to travel to India. So I bring India to Moscow. That’s the first thing. The second thing, is as you said, there’s nothing without culture and every event is different – the yoga event is more about yoga, India Day’s about showing the whole of India, so there’s a live marriage, there’s a fashion show with Indian women who are staying in Moscow, there’s a chess competition, there’s a big bazaar, there’s an Indian kitchen and we have a cultural program going on. So all the Russian people participate there.

There’s more Russian participation and there’re a lot of local artists coming from India. So you know, this time we’re doing for 3 days, 10-12 August, so for 3 days you’ll forget you’re in Moscow park Sokolniky. We bring you bright colors, everything’s so colorful and every time God has been with us.

The hottest day in Moscow is when we’re doing India Day. So every time journalists say you bring sun with you. So it’s not Indians who come for India Day, India’s the organizer. It’s Russians who come. And it’s talking about love and friendship. In all of the events we do with the help of our sponsors we do lots of free giveaways.

All the old people get Indian cloth to make cloth for the dresses. We give tea in a free giveaway, we have Indian suppliers of cosmetics, we give free cosmetics; we try to give and we have a lot free. So in the lottery, when you buy the lottery, every lottery gives you a prize other than the main prize of getting a free ticket to India, in every ticket you get a prize. And all this money goes to charity organizations; so all of the events have something to do with charity.

Whenever somebody gives me something, we give for charity and when you buy a ticket you get a prize and all the money collected goes to charity. So it’s one way of helping the Russian poor kids or kids with no homes, or the kids with no parents. So we take care of orphans every time. All the events have more of charities. That’s how we bring more love. Why should somebody give me money? Because it’s going to the right place. So it’s more of the charity.

Views and opinions expressed in this article are those of Sammy Kotwani and do not necessarily reflect those of Sputnik.