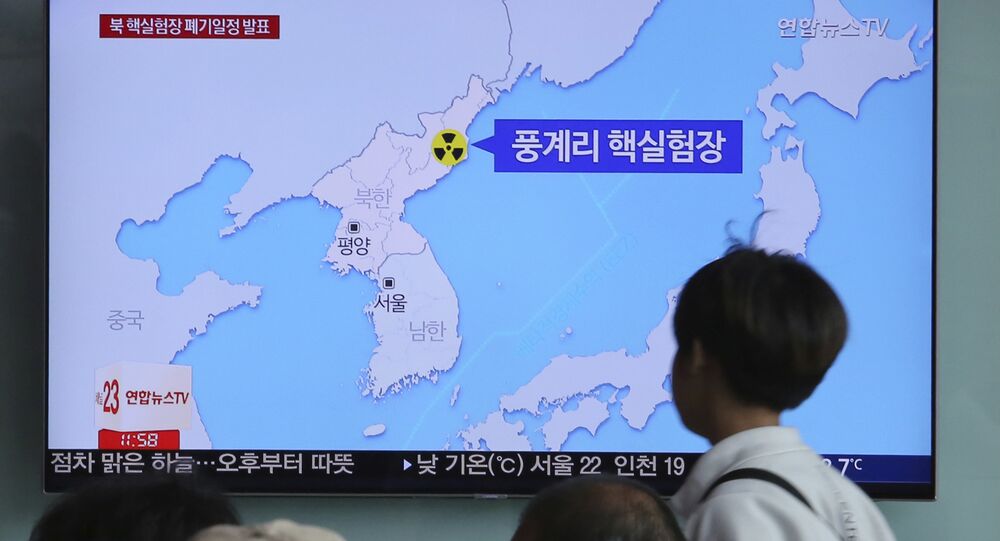 WASHINGTON (Sputnik) - The US unpredictable and threatening approach to North Korea has even frustrated American allies and is unlikely to achieve the long-term objective of denuclearizing the peninsula, analysts told Sputnik.

On Thursday, US President Donald Trump cancelled his summit with North Korean leader Kim Jong-un that was originally scheduled to take place on June 12 in Singapore. The meeting was canceled after hostile exchanges between Trump administration officials and Pyongyang including US threats to topple the regime.

© REUTERS / Edgar Su/File Photo
White House: US Team Still May Head to Singapore to Work on Trump-Kim Summit
Trump said on Friday, however, that conversations are underway right now with North Korea and a canceled summit with Kim Jong Un could go ahead on "the 12th."

Many world leaders have expressed their frustration on Trump’s decision. Kremlin spokesman Dmitry Peskov said Russian President Vladimir Putin regretted the cancellation of the US-North Korea summit, pointing out that Kim did everything he was asked to do including destroying the Punggye-Ri nuclear test site.

Trump began 2018 with direct threats to the North Korea and derisively called Kim Jong Un "rocket man" and promised to wipe him off government off the earth. The US president changed his tone during the spring when he began to pay compliments to Kim.

In his letter to Kim on Thursday, Trump said although he looked forward to meeting with Kim, it was "inappropriate" at this time given comments the White House considered hostile.

"In a contest of who can be the most erratic leader, President Trump beats Kim Jong Un hands-down," Senior Fellow at Stimson Center and Founder of 38 North, the leading web portal on tracking Pyongyang’s nuclear activity, Joel Wit told Sputnik.

Wit added that Trump’s unsteady approach has left "everyone scratching their heads," including US ally South Korea.

Institute for Science and International Security President David Albright said in a statement on Friday that North Korea’s destruction of the Punggye-Ri nuclear test site can lay the basis for negotiations to denuclearize the peninsula and should not be seen as a maneuver to deceive as some Trump officials suggested.

Earlier this week, Pence in an interview with FOX News warned North Korea that the "military option" was still on the table and suggested that the United States might have to implement the "Libya model" of regime change, hinting at the bloody overthrow of former Libyan President Muammar Gaddafi. Pence was mimicking remarks made earlier by Trump National Security Adviser John Bolton.

Korean deputy foreign minister Choe Son Hui told KCNA that Pence was a "political dummy" and called the US vice president’s remarks "unbridled and imprudent." The minister warned that Pyongyang would reconsider holding the talks on June 12 if the United States continued unlawful and outrageous acts.

Gray mentioned that North Korea does not want to suffer the same fate as Libya which has been virtually dispersed after ending its military programs.

"Trump did nothing to allay North Korean fears on this point and instead continued to verbally threaten Pyongyang," he said.

Gray expressed the hope that both countries will continue talks even without a summit, "albeit at a lower level."

Joel Wi added, however, that no matter what happens it will not be good for the United States.

Earlier in the day, Defense Secretary James Mattis said the US military is ready to take action against North Korea if necessary. At the same time, he confirmed that the June 12 meeting could still take place if diplomats manage to put it together.

Trump Suggests Summit With Kim Might Not Happen, Demands Denuclearization

Trump Insists on Denuclearization Amid Threat of Kim Talks Being Canceled