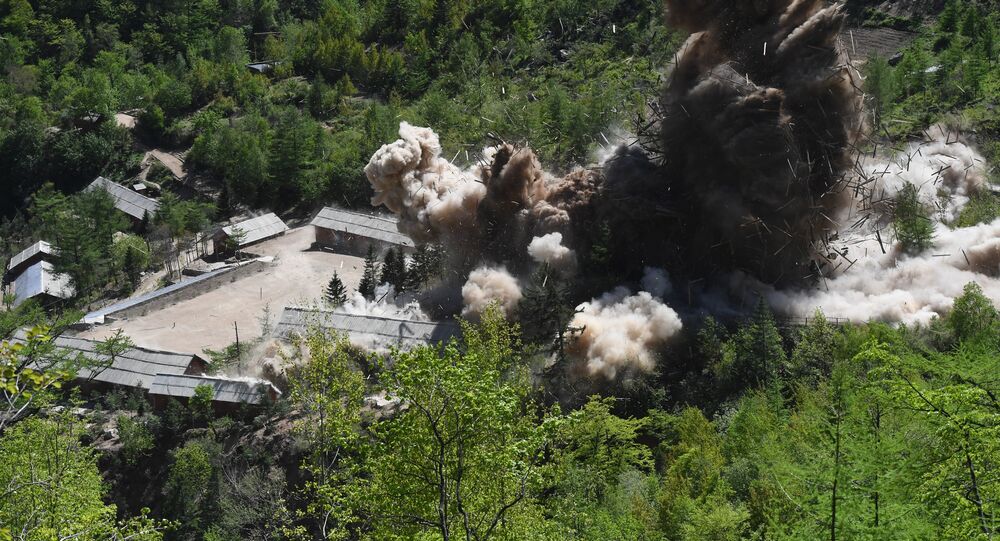 WASHINGTON (Sputnik) - North Korea’s dismantling of its nuclear weapons test site should be seen as a positive step towards resolving the crisis on the Korean peninsula, Institute for Science and International Security President David Albright said in a statement on Friday.

"North Korea’s action should not be trivialized but viewed as an important step to reduce tensions and lay the basis for denuclearization negotiations," Albright said. "It is not fair to portray it as part of an effort to hide or disguise its nuclear weapons capabilities."

North Korea’s action, he added, is even better than a freeze because it represents a permanent disabling of the site. Three minutes of film footage taken by a journalist makes it clear that major buildings and tunnel entrances were destroyed, according to Albright.

© AP Photo / Evan Vucci
Trump: US Engaged in 'Very Productive Talks' With North Korea About Reinstating Summit
But like many disabling steps, North Korea could likely resume nuclear weapons tests within a few months by digging tunnels in nearby mountains, Albright said. Moreover, the action does not affect North Korea’s existing stockpile of nuclear bombs and its ability to make additional weapons, even if the lack of a test facility could inhibit the nation’s ability to field reliable and deliverable warheads, according to the release.

On Friday, Trump signaled that the meeting with Kim may actually go forward after the US president received a "warm" letter from Pyongyang. In comments published by North Korea's state-run news agency KCNA, Kim said on Friday that he wanted the United States to know Pyongyang wants to sit down at "any time" to solve problems with Washington.

Before founding the institute, Albright worked with the International Atomic Energy Agency (IAEA) from 1992 to 1997 and was the first non-governmental inspector of the Iraqi nuclear program. He was also a Senior Staff Scientist at the Federation of American Scientists.