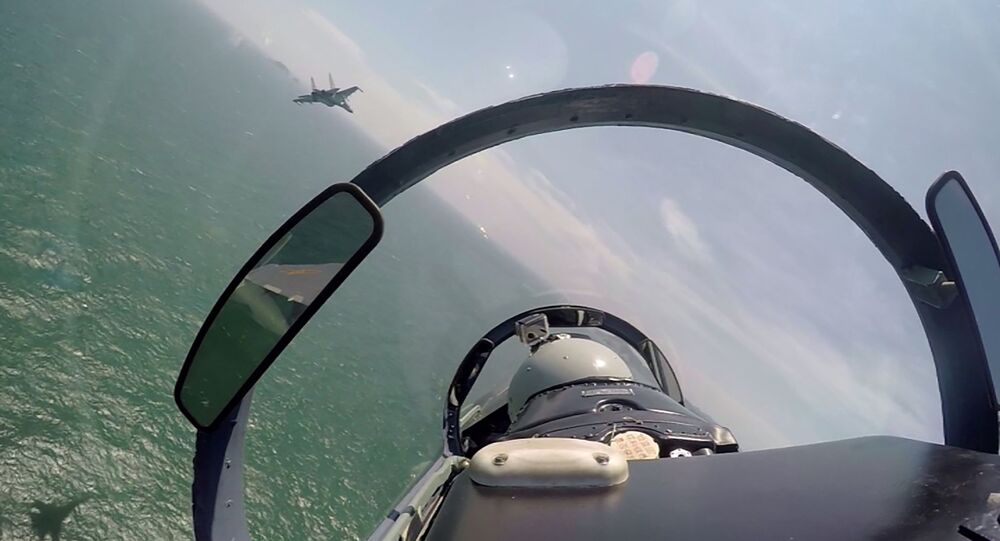 Washington's decision to disinvite Beijing to international naval drills over what it called "the militarization" of the South China Sea is unlikely to affect China's policy with regard to the disputed maritime region, analysts told Sputnik, stressing that the US move has followed a truce in the US-China tariff war.

The US's withdrawal of an invitation to China for the 2018 Rim of the Pacific Exercise (RIMPAC) under the pretext of Beijing's construction activities in the South China Sea clearly demonstrates the unscrupulousness of Washington's goals, says Shen Shishun, the director of the China Institute of International Affairs' Center for South Pacific Studies.

"China is operating exclusively within the confines of its sovereignty in the South China Sea," Shen told Sputnik China. "Undoubtedly, [Beijing] carries out both earthworks on reefs and military exercises within the framework of the protection of the country's sovereignty. The US does not want to understand this. Additionally, China's joint exercises with other countries or international organizations are conducted to bolster mutual trust, partnership and cooperation, to develop military contacts and exchanges and ensure transparency in the military sphere."

In contrast, Washington is striving to demonstrate that it is the only actor that brings justice to the region, the scholar noted, adding that the invitation withdrawal is just a pretext to exert further pressure on China. Still, Shen believes that the effort is futile.

"China remains confident," he said. "Its actions aimed at protecting [national] sovereignty are consistent and firm."

© AP Photo / Ng Han Guan
US-China Trade Frictions Indicate 'New Normalcy' in Bilateral Ties – Economist
Russian political analyst Alexander Lomanov echoes Shen: Regardless of whether China will participate in these [RIMPAC] maneuvers or not, the Chinese policy in regard to the South China Sea and the protection of its fundamental interests will not change in any way."

The analyst presumed that Beijing's behavior could become even more decisive. In any event, it is unlikely that China would make any political or military concessions in the wake of the invitation withdrawal.

"I believe that China took enough compromise steps during the trade negotiations last week," Lomanov said. "The US will obviously try to exert further pressure on China. However, Beijing's realpolitik indicates that it does not intend to relinquish its fundamental interests regardless of any pressure.

On Wednesday the US Department of Defense announced that it would not invite the People's Liberation Army Navy (PLAN) to participate in the US-led RIMPAC drills that bring together over 20 nations including Australia, India, Japan and the United Kingdom every two years.

"As an initial response to China's continued militarization of the South China Sea we have disinvited the PLA Navy from the 2018 Rim of the Pacific (RIMPAC) Exercise," Lieutenant Colonel Christopher Logan, a Pentagon spokesman, stated.

© REUTERS / Carlos Barria
To be Continued? China Wins First Round of Tariff War, Trump Not Satisfied
In response, China's Defense Ministry said that Washington had "ignored the facts and hyped up the so-called 'militarization' of the South China Sea."

"This decision by the United States is not constructive. Closing the door to communication at any time is not conducive toward promoting mutual trust and communication between the Chinese and US militaries," the ministry emphasized.

For his part, Chinese Foreign Minister Wang Yi dubbed the decision as "unconstructive" while speaking at a joint press conference with Secretary of State Mike Pompeo in Washington: "We find that a very unconstructive move…. It's unhelpful to mutual understanding between China and the US. We hope the US will change such a negative mindset."

Wang pointed out that China "places civilian and some necessary defense facilities on its own islands" citing the country's "right to self-defense."

"This is an ordinary deployment, it has nothing to do with militarization," the minister underscored, highlighting that China is doing it "on a much smaller scale" compared to the US's activities in Hawaii or the island of Guam.

The decision to disinvite China to the naval drills was taken on the heels of the preliminary trade agreement made by Washington and Beijing on May 19. The two parties agree to halt the ongoing tariff war. However, a few days later Larry Kudlow, the director of the National Economic Council under US President Donald Trump, signaled that tariffs were not completely off the table.

Ankit Panda of The Diplomat noted that "the Department of Defense chose to describe it as part of an 'initial response,' suggesting that the administration may follow up with a series of other moves."

"The RIMPAC disinvitation should not be seen in a vacuum," the observer argues. "It comes at a time of considerable uncertainty in US-China ties and it remains clear that despite the recent thaw in the brewing trade war, relations between Beijing and Washington are poised for a significant period of turbulence."