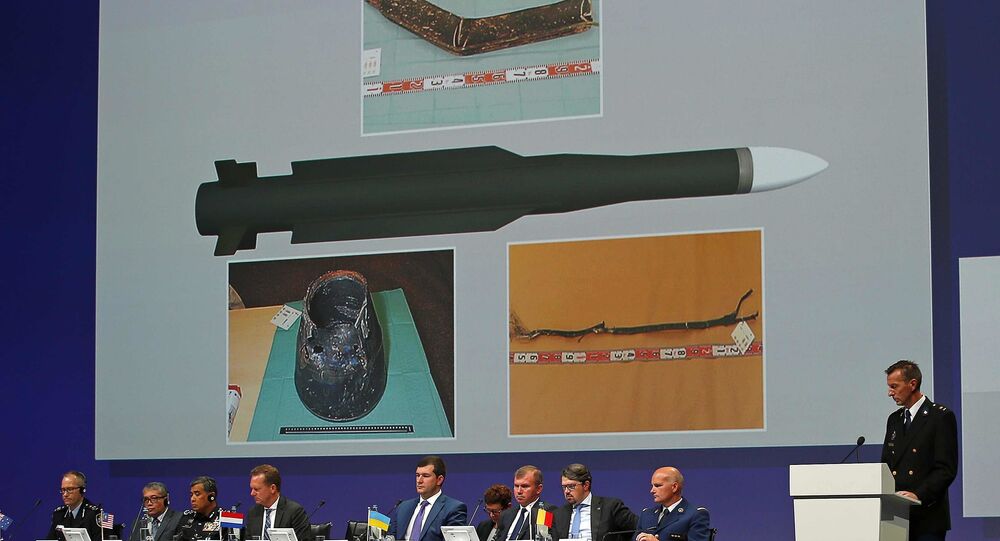 Dutch investigators now say that the missile which shot down Malaysia Airlines Flight MH17 over eastern Ukraine in 2014 was launched from a BUK missile system operated by the Russian military. Speaking to Sputnik, Eastern Europe political affairs observer Jafe Arnold said the claims were part of a concerted NATO campaign against Russia.

On Thursday, Dutch investigators said that they have now uncovered hard evidence that a BUK TELAR system from a military unit in Kursk, Russia, shot down flight MH17 in July 2014, but added that they wouldn't make this evidence public "at this time." The Russian Defense Ministry immediately responded, reiterating that it have provided exhaustive evidence, including field tests of the BUK system, which it says conclusively demonstrates that it was a Ukrainian anti-aircraft missile system that downed the plane.

In an email commentary for Sputnik, Jafe Arnold, an editor at Fort Russ, an independent news website that provides extensive coverage of the civil war in eastern Ukraine, suggested that the "ulterior motives of the timing of these allegations are obvious."

"The recent propaganda tropes against Russia, such as the Skripal case, allegations of meddling in the American elections, and fake news about Russian and Syrian anti-terrorist operations, have all been largely discredited," the journalist explained.

"NATO needs a new propaganda offensive to uphold its crumbling information war against Russia, and Washington especially needs a new rallying line for the West amidst the widening rift between the EU and the US. The new round of allegations in the MH17 investigation cannot be understood outside of the fact that this is part of NATO’s campaign against Russia. This is just that — a campaign, not an independent investigation," Arnold added.

© REUTERS / Francois Lenoir
All Missiles Demonstrated By MH17 Investigators Were Decommissioned After 2011 - Russian MoD
According to the journalist, the upcoming FIFA World Cup in Russia is part of this campaign, and part of the reason the new MH17 allegations have been rolled out at this time. In Arnold's view, the new claims are meant "to deprive Russia of any respectable reputation and isolate it even from such a basic humanitarian affair as a sporting competition. On the most basic level, this MH17 propaganda campaign is meant to scare ordinary people from attending the World Cup by portraying Russia as a criminal rogue state."

Arnold wrote that he finds it "predictable" that the Joint Investigation Team would not release any actual evidence to back up the new claims, "because this is not an objective investigation whose mandate is to gather and review evidence and present a coherent theory on the MH17 tragedy."

"Proposals for such an independent, objective, multilateral investigation were blocked from the very start, and were instead replaced with essentially a NATO commission whose job has been to confirm the preconceived, starting claim that Russia or Russian-backed forces are behind the MH17 tragedy," the journalist noted.

© REUTERS / Francois Lenoir
A damaged missile is displayed during a news conference by members of the Joint Investigation Team, comprising the authorities from Australia, Belgium, Malaysia, the Netherlands and Ukraine, who present interim results in the ongoing investigation of the 2014 MH17 crash that killed 298 people over eastern Ukraine, in Bunnik, Netherlands, May 24, 2018

Ultimately, Arnold suggested that it was questionable whether the new claims would have their desired impact – such as new sanctions by the European Union or some other actions to sever remaining diplomatic ties.

"Europeans are already growing tired of the anti-Russia sanctions, and with the EU and US gradually entering into conflict over such crucial issues as the Iran deal, the use of the US dollar as the global currency, relations with China, etc., the EU has to consider its own future independently from the chaos-subsumed US foreign policy establishment. If the EU continues to make an enemy out of Russia for the sake of American geopolitics, then it is depriving itself of a future. So the EU would be smart to think twice about whether it should trail this MH17 NATO ploy or think about its own interests in our rapidly changing world," the journalist concluded.

Hendrik Weber, the founder of People Diplomacy Norway, who recently traveled to Donetsk, as well as Crimea, to get an alternative perspective to that presented in the mainstream European media, said he found the entire MH17 case "very strange."

© REUTERS / Maxim Zmeyev
‘We’re Not Ready Yet’: What MH17 Investigation Won’t Discuss
According to Weber, the Dutch investigation seems almost purposely dragged out, allowing it to be "mixed with other allegations … [and] used against Russia again and again." He also found it odd that the Joint Investigation Team has continually refused to consider the evidence and information provided by the Russian side, including BUK developer Almaz Antei.

"I understand that the research could be completed and a proper final report submitted. However, then this report must contain all the evidence and findings. It cannot be that a commission says, 'We have all the evidence, but we do not give it out.' It looks more like a game in which Russia should be guilty as long as possible," Weber stressed.

The activist warned that the world is now in a "dangerous situation," with accusations against Russia being made constantly and without any evidence to back them up.

"The worst part is that it is not just with these often baseless allegations, but that fatal consequences which are drawn from [them]. Remember the case of the former agent Skripal and his daughter: there is still no evidence that Russia is involved in this, but 139 Russian diplomats were expelled from many European countries; everything without proof. 'Everyone is innocent until proven guilty' seems not valid when it comes to Russia," Weber lamented.

Ultimately, the activist suggested that Europeans "can only hope that some politicians keep a clear mind and that the citizens of the EU countries that want friendship with Russia stand up and tell their governments that it is enough now. We need more dialogue and no more confrontation."

The views and opinions expressed by Jafe Arnold and Hendrik Weber are those of the experts, and do not necessarily reflect those of Sputnik.