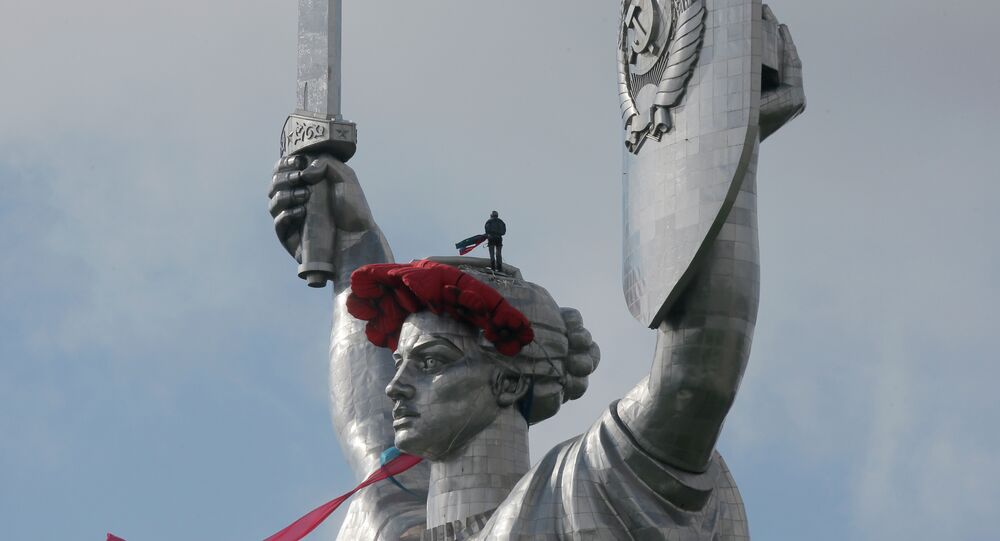 RIA Novosti Ukraine and Sputnik have been added to Kiev's sanctions list and blocked in the country. The Russian Foreign Ministry expressed its "outrage" over the decision, calling it an "act of political censorship." Speaking to Sputnik, Soviet-born Swedish journalist Israel Shamir said the move reminded him of something he'd experienced before.

Sputnik: What is your take on this move to sanction Russian media outlets in Ukraine? Was it expected?

Israel Shamir: It seems that old forgotten habits are the last to die. In the old days, back in the 1950s or 1960s, it was usual for Ukraine, like Russia, to block the transmission of Voice of America, the Voice of Liberty, and whatever else the Western services were called. Now, they continue to block… Russian transmissions, which are known to supply proper, up-to-date news without as much propaganda as that of the Ukrainian services.

© Sputnik / Evgenya Novozhenina
Sputnik, RIA Novosti Ukraine Blocked in Ukraine According to New Sanctions List
The really upsetting thing is that this fight against RT and Sputnik is not only happening in Ukraine, but takes place also in the United States, in the United Kingdom and many other places. It seems that the fear of… open alternative news, alternatives to the things broadcast by Western corporate media is something that is very upsetting for so many people and countries.

Sputnik: Was there some specific event that caused this to happen? Because obviously these media sources were operating for some time in Kiev. What happened recently?

Israel Shamir: Actually, things have actually gone from bad to worse. It's not like we have some kind of stable bad situation. Things are getting worse. The terrible developments in England; probably your listeners remember when so many Russian diplomats were sent home for something that turned out to have absolutely no basis in reality; not even a poisoning but some kind of food poisoning of Russian expatriates – something that is so miserably unimportant that one can't understand how come hundreds of Russian and Western diplomats were sent home. So we are actually in the middle of a situation that is going from bad to worse.

© REUTERS / Dylan Martinez
Viktoria Skripal Believes Yulia's First Video Address Made Under Pressure
In addition, there is a very strong feeling now in the east of Ukraine that it's very possible that the situation will get worse militarily; people from Donetsk and from Lugansk report practically on a daily basis of military provocations by the Ukrainian armed forces. Many expect that the Ukrainian army will try to break through the defenses of the republics [during the World Cup in Russia].

If that is true, it's very important for them to consolidate the information field, because in modern war, control over information is a paramount thing to achieve. That's a possible explanation.

Sputnik: How is this going to complicate the already very difficult relations between Moscow and Kiev?

Israel Shamir: The relations are indeed very, very complicated and they are not likely to improve. Russia, the [breakway] republics, Ukraine and the countries of Europe succeeded in brokering the Minsk agreement. But it turns out that the Minsk agreement does not appeal to Kiev. Despite signing it, they do not really want to fulfill it. As long as they don't want to fulfill it there isn't any chance for the situation to be resolved peacefully.

So everybody is waiting to see what will happen now to Ukraine. The country is going from bad to worse and is in very poor shape. Governments in such situations sometimes are likely to turn to arms [to dampen] the ire and anger of the people.

Sputnik: Do you see any road to reconciliation, to rapprochement between Russia and Ukraine?

© Photo : Torsten Maue
Legendary Ukrainian Supermini Car Factory Sold Off for Price of Scrap Metal
Israel Shamir: Yes, definitely yes! These two countries were part of a single political body for hundreds of years. Some parts were united as long as six hundred years ago, and are as Russian as anything. The schism between them is as odd as a schism between the south and north of France, or the east and west of the United States – possible but very, very odd.

The only thing that needs to happen is for the government of Ukraine to cease considering itself as the bridgehead of NATO in the east, and to start to consider itself again as a friendly state to Russia, and Russians would be very happy to see them as a friendly neighbor; there was a lot of cooperation, a lot of things they made together, from airliners to missiles. They could be very successful together, but separately Ukraine is not really going to have much success.

For his part, Belgrade-based journalist Joaquin Flores wrote to Sputnik in an email commentary that the "cyberwar" being conducted by the US and its allies in Kiev through the blocking of Russian media outlets "must be uniformly denounced by all journalists, citizens of conscience and human rights organizations."

"The right to free and open access to information, even if its coverage is inconvenient to vested interests or pillars of power, regardless of political or geopolitical orientation, is a necessary – indeed critical – component of discourse in a functioning society based in the best interests of its citizens," Flores added.

© CC BY-SA 2.0 / Global Panorama / UEFA Logo
Russian Sports Media Urge UEFA Chief to Address Arrest of Russian Journalist in Ukraine
"Stifling these voices may seem temporarily convenient to this or that regime, but in the long run it is the regime itself which loses legitimacy and destabilizes itself; it will be regular people, acting through popular organizations, who will ultimately act to right these wrongs and hold these transgressors accountable," the journalist noted.

Flores emphasized that Fort Russ News "stands shoulder to shoulder with Sputnik, RIA Novosti Ukraine and other multipolar news organizations around the world, along with independent journalists, in the name of peace, access to various viewpoints and information, and basic fundamentals of justice."

Israel Shamir is a Russian-Israeli writer, journalist and commentator based in Sweden. Joaquin Flores is the editor-in-chief of Fort Russ News and director of the Belgrade-based Center for Syncretic Studies. The views and opinions expressed by Mr. Shamir and Mr. Flores are those of the commentators and do not necessarily reflect those of Sputnik.

Commenting on Kiev's decision against RIA Novosti Ukraine and Sputnik, Anthony Bellanger, the general secretary of the International Federation of Journalists, told Sputnik that he and his organization "condemn attacks on the freedom of speech and of the press in Ukraine in general and with regard to Russian journalists in particular."

"After the arrest of RIA Novosti Ukraine editor-in-chief Kirill Vyshinsky last week, Ukraine's authorities have taken the sudden decision of blocking access to various internet resources. This is unacceptable, and I urge Ukraine's president to once again allow access to these Russian sites in Ukraine. The protection of pluralism of information should remain one of the basic principles of democracy, both in Ukraine and in other countries," Bellanger stressed.